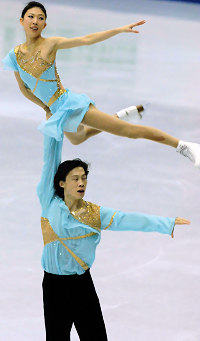 China’s Qing Pang and Jian Tong, both 28, overcame teammates Dan Zhang and Hao Zhang in the long program to win the title.

Qing Pang and Jian Tong of China overcame teammates Dan Zhang and Hao Zhang to win their third title at this event, while USA’s Brooke Castile and Benjamin Okolski edged out Rena Inoue and John Baldwin to win the bronze.

Pang and Tong had a rough start when Pang underrotated and stepped out of the landing of her jump on the side-by-side triple toeloops. The team quickly recovered to land a side-by-side double Axel-double Axel sequence, a triple twist, and a difficult lift.

“We skated quite well today,” noted Tong. “We are getting better and better and hopefully we’ll be at our best at Worlds. These championships are an important test for our programs. We like to come to Korea and feel comfortable here. Now we have one month before the World Championships and we hope that we can prepare well without any health problems for Worlds. We wish the same also to the other competitors.”

Dan Zhang (22) and Hao Zhang (23) appeared a bit sluggish in their routine to music from The Myth soundtrack, which earned them 111.39 (54.82/56.57) points. Dan Zhang doubled her second jump on the opening side-by-side double Axel-triple toeloop combination, as well as the side-by-side triple Salchows. She also lost her edge on the death spiral which resulted in an awkward exit.

Nevertheless, the 2007-08 Grand Prix Final silver medalists didn’t disappoint with their huge throw triple twist and throw triple Salchow. They also produced a throw triple loop and three difficult lifts. With a total score of 181.84 points, however, they slipped to second overall to settle for silver.

“Today’s performance wasn’t good,” admitted Dan Zhang. “We had some problems, especially with the jumps. For us it was pretty bad. Hopefully we’ll be able to overcome our problems until the next competition and that we’ll be able to skate much better at Worlds. We’ll work hard and train all our elements.”

Skating to Scheherazade by Nikolai Rimski-Korsakov, the U.S. bronze medalists opened with a good triple twist and throw triple Salchow, but then Castile singled her jump on the side-by-side double Axels. The team also had shaky landings on their side-by-side double flip-double toeloop combinations, and Castile later two-footed the landing of a throw triple loop.The Americans otherwise produced three good lifts.

“I’ve been struggling with my jumps a little bit this week,” admitted Castile, regarding missing the Axel again. “Something just didn’t click in my head and I pulled out. Sometimes it just happens.”

Teammates Inoue (31) and Baldwin (34), who stood in third after the short, placed fourth in the long 98.60 (47.56/51.04) points and overall (156.00 points). Baldwin doubled his jump on the side-by-side triple toeloops and Inoue singled and two footed the landing of a planned throw triple Axel which had bad air position.

USA’s Jessica Miller (26) and Ian Moram (28) placed fifth in the long with 94.36 (49.39/44.97) points, maintaining fifth place overall (149.24 points). The 2007 Cup of China bronze medalists produced a good double twist and throw triple loop, however, Moram singled his jump on the side-by-side double Axels and Miller two-footed and put a hand down on the landing of their throw quadruple Salchow.

Miller acknowledged that their flawed throw quadruple Salchow earned more points than their clean throw triple loop. “It’s the best throw loop I’ve ever done, so that really says something.”

USA’s Tiffany Vise and Derek Trent placed a disappointing eighth (88.96 points) in the long and overall (134.41 points) after Vise fell on both the throw jumps – a quadruple Salchow and triple loop.