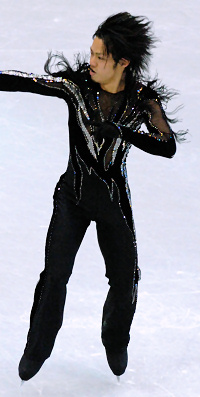 Japan’s Daisuke Takahashi is currently the leader after the Men’s Short Program, with USA’s Evan Lysacek and Canada’s Jeffery Buttle trailing close behind.

Takahashi delivered an upbeat routine in which all of his jump elements were superior in quality. His triple flip-triple toeloop earned a GOE of +2.14, his triple Axel a +2.43, and his triple Lutz of a +1.85. All of the Japanese champion’s elements received positive GOEs for that matter, including two level 4 spins and an excellent level 4 circular step sequence which drew loud cheers from the audience.

“It’s all about the audience,” explained the 21-year-old. “They make me go faster, they are excited and I’m feeding off their energy. The highlight of the program is the footwork for me, because I feel like a true dancer when I’m doing it.”

In the end, Takahashi earned a new personal best of 88.57 (48.74/39.83) points for his impressive routine to a “hip-hop” version of Tchaikovsky’s Swan Lake. “The short program was good for me,” he added. “For the free skating, I hope to do two quads.”

Lysacek placed second with a new personal best of 84.06 (46.06/38.00) points for his Zorro routine. The defending champion opened his program with a clean quadruple toeloop-triple toeloop combination, a triple Axel, and a triple Lutz. He also delivered an excellent level 4 flying sit spin, as well as very good level 3 circular and straightline footwork. Lysacek also earned positive GOEs on all of his elements, however, the judges weren’t as generous with the points as they were with the leader.

“I’ve made a lot of improvements since Nationals,” said the 22-year-old. “I went home and trained in a more relaxed environment. I felt a lot better tonight and I think I was kind of able to go on muscle memory and not try to make it happen quite so much. At Nationals I knew there was a lot riding on it and there was a lot of stress on me, so to be able to come here and just have a more chill environment is just kind of a pleasure for me.”

Buttle drew lots of cheers when he took to the ice with his stirring program to Adios Nonino by Astor Piazzolla. The Canadian silver medalist opened with an excellent triple flip-triple toeloop, followed by a equally good triple Axel, but then two-footed the landing of his triple Lutz. Despite the mistake, he delivered three very good level 4 spins as well as good circular and straightline footwork, earning 83.85 (45.85/38.00) points for a third place finish.

“When I went on the ice I didn’t feel my best,” admitted the 25-year-old, “but at home (in practice) sometimes I don’t feel my best either. I went out there, the jumps felt great, the Lutz was a little shaky. I have no idea what happened. [The Lutz] went up a little bit weird, and it came down funny. It was as if I’ve never done a triple Lutz before. I thought I skated better at Canadians. The Axel here was much nicer. I upped the difficulty on one spin that probably helped the score.”

Buttle, who has been struggling with his new short program this season, switched back to last year’s Adios Nonino. “It was a tough decision,” he said. “I didn’t want to let go of it and I still actually do it in exhibitions. I was blown away by how receptive the audience was. I was a little bit tired this evening and my warm-up went really poorly, and the Korean audience was very supportive.”

“It was kind of weird,” said Carriere. “It was like I didn’t feel I was in my body – like I was just kind of out there doing it. I feel good, but I think the time change may be part of it. I took a nap earlier today and it was one of those naps that when you get up, you don’t really feel any better.”

Chengjiang Li of China is in fifth with 72.25 (38.78/33.47) points. The 2005 Four Continents silver medalist skated a clean program to The Yellow River which featured a quadruple toeloop-double toeloop, a triple Axel, and a triple loop.

“It was the best performance of the season,” stated Li. “My other short programs this year didn’t go too well. It didn’t feel too hard to skate tonight. However, I’m feeling not so comfortable in general. I just want this to be over and to go home.”

Canada’s Vaughn Chipeur is currently in sixth place (70.83 points), after his routine to A Blues Concerto by Russo. The 23-year-old put his hand down on a triple Axel, but otherwise landed a triple flip-double toeloop combination and a triple Lutz.

“I feel pretty good about my performance,” said Chipeur. “Obviously I would have liked to have the triple-triple (combination). It was probably the last time I performed this program so I went out there trying to make the most of it.”

Chipeur, who is competing at this event for the first time, feels ready to be here. “It was nice to keep my season going after Nationals,” he said. “I’m here with everything to gain and nothing to loose. It was a little hard to keep going after Nationals, because usually that’s it and my season is over. But I knew that I was coming here and that was exciting and that motivated to keep training.”

Takahiko Kozuka of Japan is currently in seventh place with 67.48 points. The Japanese silver medalist landed a good triple Lutz-triple toeloop combination, but fell out of the landing of a triple Axel.

“I’m very sad about missing my triple Axel,” admitted the 18-year-old. “I felt tight on the jumps, but it was better afterwards. I won’t try the quad in the free skating, but I want to do my triple-triple combinations and my goal is to land all my jumps successfully.”

USA’s Jeremy Abbott sits in ninth (60.87 points) after falling on a quadruple toeloop attempt and a triple Lutz.

“I’ve been training really well before nationals, and after Nationals, leading up to this event,” said Abbott. “I had somewhat of a breakthrough on my program at Nationals. As anybody who’s been following my season knows, I kind of had disastrous short programs all season and I had to claw my way back.”

” The long is a whole other program and a whole other day,” the 22-year-old continued. “I love my short program. I love it to death – it’s so much fun, but I feel I have an easier time connecting with my long.”

The event continues with the Original Dance, Pairs Long Program, and the Ladies Short Program.