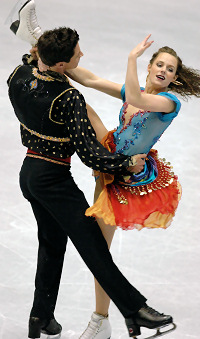 Canada’s Tessa Virtue and Scott Moir maintained their overnight lead after the OD, while USA’s Meryl Davis and Charlie White and Kimberly Navarro and Brent Bommentre are in second and third, respectively.

The top 9 teams maintained their original placements from the Compulsory Dance yesterday. In addition, the top five teams all scored a new personal best in the OD.

Virtue and Moir showed excellent harmony and expression in their Russian folk dance to Dark Eyes. The Canadian champions earned a level 4 on all elements except for a combination spin (level 3). The team also earned positive Grades of Execution (GOE) on all their elements, including a +2.00 on their circular footwork which had excellent timing as well as good speed and ice coverage. They earned 65.02 (34.74/30.28) points for a first place finish in the OD, and currently have a total of 103.24 points.

“This is our building event before Worlds,” said Moir. “We still want to keep everything moving. As I say, we’ll see what happens. It was exciting out there. The Korean people were really into it. There is not a ton of them out there, but they’re very loud.”

Davis and White delivered a characteristic Russian folk dance to Kalinka in which all elements were also rewarded with positive GOEs. Although both their step sequences only received a level 3, the team showed good interpretation of the music and executed two impressive lifts.

“It was not technically perfect,” said White, “but we put a lot of energy out there and that was what we were hoping to do. Getting a lot of expression and a little more relating towards each other. I think that we accomplished that.”

When asked what wasn’t perfect technically, White replied: “Nothing major. Just little things between us. It has felt smoother, but it was still good.”

Davis added that the program has developed throughout the season during competitions. “It’s hard to compare to things earlier this season,” he said, “but it definitely felt good.”

“We’re going to prepare emotionally for loneliness and then togetherness,” added Davis, regarding the Free Dance. “Kalinka and Eleanor Rigby couldn’t really be more different.”

Teammates Navarro and Bommentre placed third in the OD with 56.67 (31.14/25.53) points, and are third overall with 91.03 points. The U.S. bronze medalist showed good expression in their unique depiction of an African folk dance to Ijuba, earning a level 4 on all elements except for their circular step sequence (level 3). The team also displayed good edges throughout their dance, as well as nice variations of position in their rotational lift.

“It was fun,” said Navarro. “This was our third season together and I know we haven’t thought that every performance was fun, but this one really worked out that way – it was a lot of fun. I really liked how we did the presentation. We usually feed off of the audience and it’s difficult for us when the audience is small or isn’t at eye-level, so we’ve been working on having the same energy regardless of those circumstances. It’s been a goal of ours and I really think we achieved that.”

“I felt the expression was right where we wanted it to be,” added Bommentre. “We changed a lot of stuff from Nationals until now. We switched around the footwork sequence and we were going out there and trying to make sure that we really protected our levels. I thought we did a great job of that. That’s the first time that’s happened internationally for us – that the rink has put out so much energy and the crowd has been that engaged.”

USA’s Jennifer Wester and Daniil Barantsev finished a close fourth in the OD with 55.44 (30.93/24.51) points, and are fourth overall with 86.39 points. The husband-and-wife team displayed good character throughout their “Western Hoedown” dance, earning a level 4 on all elements except for their circular footwork (level 3).

“I think it went well,” said Wester. “We haven’t made any changes to the program between Nationals and now. We did change our footwork before Nationals, but after that we didn’t make any changes.”

Kaitlyn Weaver and Andrew Poje of Canada made some minor mistakes during their non-touching midline step sequence (level 3), however, they earned a level 4 on all other elements. The team earned 54.95 (31.30/23.65) points for a fifth place finish for their Russian folk dance to Road to Vladivostok, and are currently fifth overall (85.89 points).

“It was ok,” said Weaver. “It was somewhere in the middle, a couple of things were off, but definitely it was an improvement for Worlds. It’s very exciting we’re going to perform this one more time at Worlds. It was definitely a step in the right direction for us. We can improve the footwork, the speed, the presentation.”

“We’ve been working a lot on our transitions,” added Poje, “on everything that we can do in isolation to do it in the program together. We’re trying to get the energy up at the end.

Teammates Allie Hann-McCurdy and Michael Coreno earned 50.53 (28.65/21.88) points for their lighthearted and fun routine, and are currently sixth overall (80.26 points).

“It was good,” said Hann-McCurdy, “another seasons best. We’re happy. At the very end, after the twizzles, we were flying. It is one of the things we’ve worked on to keep it going till the end. We hope to get some feedback here, and then we’ll go home and see what we’ll change.”