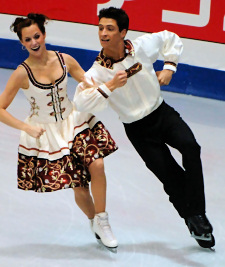 Following a decision of the 51st Ordinary Congress of the ISU in June 2006, no Qualifying Rounds will be held. All skaters/couples will compete in the Short Program, and the top 24 will advance to the Free Skate.

The competition kicked off on Feb. 13 with the Compulsory Dance and the Pairs and Men’s Short Program.

Canada’s Tessa Virtue and Scott Moir are the leaders after the CD, followed by USA’s Meryl Davis and Charlie White and Kimberly Navarro and Brent Bommentre. All three teams earned a seasonal best in this dance.

The team says coming in as the “favorites” at this event, was a different feeling compared to that at Nationals.

“I suppose we had that a little bit at Nationals,” admitted Virtue. “There is always pressure, the teams are amazing, and we know that we have to skate well and have to lay down three solid performances. It’s certainly not a comfortable position, and we are well aware who is coming up behind us. We’re just trying to do our best and skate like we’ve been training.”

The Canadian champions were spotted having an intense discussion with coach Marina Zueva in the “Kiss and Cry” area after their skate, but it had nothing to do with the CD itself.

“Marina is always continuing to teach us and we’re always learning,” explained Moir. “We’re such a young team, so we’re trying to get as much experience as possible in the next couple of years. We’re taking each moment to learn as much as possible. I think the Yankee Polka went well today. We’re very happy with it. We’re learning how to compete with pressure and against of some of the best teams of the world, and we’re trying to break that barrier into the top three.”

“We definitely like the Polka,” said White, “and we didn’t get a chance to compete it at either of our Grand Prixs. I think we performed well and I’m glad we got a new season’s best.”

“I don’t think it was actually our season’s best,” countered Davis. “I think we could do a better Polka, but it felt pretty good. [We can improve] our unison and being much more together and I think that we can make it much more powerful. We want to get as much experience as we can in the season going into Worlds. Four Continents is a great place to get out there one last time before you compete at Worlds.”

“We’re really happy,” said Bommentre. “That was a season’s best for us. It was really solid.”

“This being the last Polka of the year, we wanted to do the best Polka ever,” added Navarro. “It was a lot better than it was two weeks ago [at Nationals]. It will be sad not to do it again this year. This is the first dance we competed at Nationals together a couple of seasons ago, so it’s fun to do it again as we have some history with it.”

USA’s Jennifer Wester and Daniil Barantsev are currently in fourth with 30.95 points. “I’m happy with how we performed,” said Wester. “Nationals was rough, so here we were both happy after the first sequence when there were no uncharacteristic errors (like at Nationals). This is my first big international (competition). It was a lot of fun. I was more nervous, but it was a nice change of pace.”

Barantsev used to represent Russia six years ago with former partner Natalia Romaniuta. Together, they took the World Junior title in 2001. “It’s nice to come back and to see all the people I know,” he said, adding that he’s never competed at Four Continents before. “A lot of people remember me from when I was skating for Russia. It’s just a lot of fun to be at the big championships and I forgot how much fun it was.”

Canada’s Kaitlyn Weaver and Andrew Poje are in a close fifth with 30.94 points. The team admitted to working a great deal on their unison, edges, technical aspects, and showmanship. “We’re proud of how far we’ve come this year,” said Weaver.”

“We’ve been working a lot on this compulsory dance just trying to make it more mature and get new feeling on it,” added Poje. “I think we improved it a lot. It was more of a challenge for us, but we kind of overcame that by working a lot.”

Teammates Allie Hann-McCurdy and Michael Coreno are in sixth place with 29.73 points, have experience with this CD as they skated it at Skate Canada and Canadian Nationals.

“It’s always good when the marks go up with the improvement of the performance,” added Hann-McCurdy. “I think that’s a good start of the week for us.”