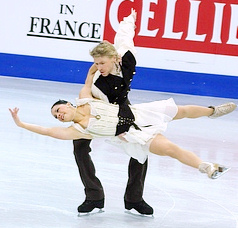 It took the new gold medalists, France's Isabelle Delobel and Olivier Schoenfelder, 11 years to finally win a medal at a World Championships.

The competition concluded today with a dramatic Free Dance event. In the end, the dance podium this year didn’t contain any returning medalists – an unheard of situation for the discipline in which the concept of “paying one’s dues” appeared to be one of the fundamentals.

It took the new gold medalists, France’s Isabelle Delobel and Olivier Schoenfelder, 11 years to finally win a medal at a World Championships. In contrast, the new silver and bronze medalists, Canada’s Tessa Virtue and Scott Moir and Russia’s Jana Khokhlova and Sergei Novitski, managed to achieve the same result in two and three seasons, respectively.

When Virtue and Moir took the ice, they wove a spell over the audience with a flawless performance to Umbrellas of Cherbourg to win this segment of the competition. The romantic style of their dance suited the charismatic couple perfectly, but compared to their main rivals, the connecting moves in the dance appeared to be easier.

The 2008 Canadian champions executed their elements smoothly and they received a level 4 on all of them except for a level 3 diagonal step sequence, and were awarded a new personal best of 105.28 (54.69/50.59) points. With a total score of 208.80 points, they finished second in the overall standings.

“We are definitely excited,” said Moir. “I think you could tell that from the kiss and cry. This is the highlight of our skating career so far. We are so pleased with how it went today and about how it went the whole week. We expected to come here and just do this. It is a different thing to actually come and follow through, so we are extremely pleased with ourselves.”

Moir also admitted to feeling a bit nervous before the performance. “You know, it was the first time in a while that I felt pressure. I knew we had a good shot on silver, and it was a huge step for us. It was exciting, though.”

“We felt so trained coming in and are happy about the result,” added Virtue. “Ending up second is a dream. We started so young and it took a while to realize that we could be good. We are always challenging ourselves and try to do our best to improve. We have been doing really well during this Championships. Every practice, every performance was just great.”

Delobel and Schoenfelder finished second in the free dance with 104.96 (53.57/51.39) points. With a total score of 212.94 points, they were able to hold onto first place to win the gold due to the strength of their compulsory and original dances.

The 2008 European champions have modified their free dance to music from the Piano soundtrack since the Europeans in Zagreb. They changed some connecting moves, got new costumes and put a temporary tattoo on Schoenfelder’s neck to better fit the image of the Harvey Keitel’s character in the movie. They also provided the press with an explanation of the sign language they used throughout the program.

The French champions obviously felt pressure of being in the lead, but still delivered an intense performance which was highlighted by intricate transitions and a silent communication between the partners. Their only mistake was stepping out of their dance spin too early, which resulted in the move being downgraded to a level 3.

“We really gave our best,” said Delobel. “We felt a lot of pressure, so it was not easy, but I think we performed well. It was the last of the season and maybe the best one. We are happy now. It is a program with many emotions for us. We made a few mistakes, but we are really happy. It was a very long road for us, and it’s our first World Championships medal and it’s gold. It’s amazing.”

“For us, a dream has come true,” added Schoenfelder. “We had a strong competition and tried to stay focused to the end. It is a long time that I’ve skated with Isabelle and it is a long and a good story. It makes us experienced and we have confidence in each other. We know each other’s reaction.”

U.S. champions Tanith Belbin and Benjamin Agosto delivered an inspired performance of their free dance to Chopin’s music, but ended up missing the podium by 0.26 points. The team, who stood fifth coming into the free dance, had nothing to loose and consequently was the only couple in the last warm-up group not to feel any pressure. It showed in their performance as they held nothing back, moving seamlessly from one element to another.

However, while the 2006 Olympic silver medalist’s technical score was the second highest of the night, their presentation score was lower than that of the leaders. The team also had a glitch during the final rotational lift, but they recovered from it quite smoothly, and placed third in the FD with 103.29 (53.75/49.54) points and fourth overall (203.00 points).

“It was certainly a best performance we’ve give of the dance minus the little mistake in the end,” said Belbin. “It felt really strong. This competition was a big mind game for us. It was good for us to get out a good performance and to overcome this one.”

“It’s been an interesting week,” added Agosto. “I’m not going to lie, it was pretty difficult to come back after the fall. It was shocking and it’s a position we haven’t thought ourselves in of course.”

Federica Faiella and Massimo Scali of Italy finished fourth in the free dance after a mesmerizing performance to Papa, Can You Hear Ne? in which all their element received level 4. It allowed them to gain the highest technical score of the evening, quite an achievement for the team who, in the past, often dropped several places in past competitions after making major mistakes. The team appeared a bit tense in the beginning, but relaxed later as they got into the mood of their dance. They improved both their personal best for a free dance and personal total score as they received 101.21 (53.84/47.37) and 201.91 points in total to finish fifth.

“I have no words for it,” said Scali about their performance. “I think this was our best performance of the season in the free dance. We tried to be emotional and we have worked a lot on that. We knew that we had high levels, so we have tried to work on interpretation. Well, we cannot say that we do not care about the medals; of course it would have been wonderful if we got a medal at Worlds, but that was never our goal for the season.”

Khokhlova and Novitski had a strong start in their routine, performing a twizzle sequence, two difficult lifts, and an impressive spin, but then Novitski stumbled in the middle of the circular step sequence halfway through the dance. Though the stumble itself was rather minor, it obviously shook the dancers, who needed a bit of time to recover their spirit, and as a result the middle section of the dance fell rather flat. The 2008 European bronze medalists received placed fifth with 99.29 (50.66/48.63) points, but with a total score of 203.26 points, placed third overall.

“Right now I don’t have any emotions,” said Khokhlova when she learned that they won the bronze. “We had hoped to fight for a medal, but it was more like a dream. Then yesterday it became realistic with the silver. It pushed us and we really wanted to repeat the success. It was enough for the bronze, which is great, but right now I still don’t fully understand it. There were a few small errors, but I don’t think they were so serious. Physically, it wasn’t so difficult to skate, but it was a different situation here. We weren’t yet used to it.”

“There was a lot of tension,” added Novitski, “especially in the last warm up group. When we got out on the ice, we were trying not to think about a medal. We just wanted to focus on skating as well as we could.”

USA’s Meryl Davis and Charlie White moved up one spot to finish sixth in free dance and overall with 96.03 (51.19/44.84) and 191.19 points in total. Their performance to Eleanor Rigby was fast, intense, and inspired, but both their step sequences and a spin were rated a level 3.

“It was definitely our best free skate this year,” said White, “Worlds is a big stage, in front of our friends and family. [It is] another level of comfort [being at a] second worlds, knowing what to expect.”

Davis agreed, adding, “It’s different. We knew what we are into.”

Nathalie Pechalat and Fabian Bourzat of France were seventh in free dance and overall (190.51 points), despite gaining level 4 on all their elements except for a level diagonal step sequence. The team’s avant-guard free dance wasn’t as well received by the audience, but their their difficult and original elements were appreciated.

The team felt appeared satisfied with their performance.

“I’m feeling great about it,” said Bourzat. “There were some mistakes and my costume got torn, but it was still fine. We got our season best.”

“I love this free dance,” said Pechalat. “I think it’s hard to leave. I really love this dress and [it] feels like me.”

Bourzat, on the other hand, feels differently. “This free dance is so difficult, with difficult lifts. We’re happy about bringing it for the whole season, but I’m glad to leave it.”

Great Britain’s Sinead Kerr and John Kerr once again captivated the audience with their unconventional “Enigma” free dance in which they portrayed extraterrestrials, but they only earned a level 3 for their non-touching midline step sequence, and the second part of their combination lift was only rated a level 2. The brother-and-sister team maintained eight place throughout the event and overall (186.94 points).

“I felt the program went really well,” said Sinead Kerr. “I thought the crowd really got behind it and really helped. We need to concentrate on our elements, but we also want to express the program as much as we can.”

“It was a disappointing start at the Cup of China,” added John Kerr, “but we gradually improved. We had the music for a while as we like it and then we and Evgeni Platov came up with the concept about what would work. So then we had the space idea.”

Anna Cappellini and Luca LaNotte of Italy finished ninth in the free dance and 10th overall (179.03 points) with an elegant performance to waltzes from La Traviata. The team received a level 4 for all their elements, but they got -2.00 deductions – one for an extended lift and the other for a fall when Cappellini slipped off her edge during the transitions in the beginning of the program.