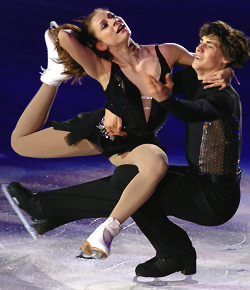 Passion is the name of the game in dance and Canadians Vanessa Crone and Paul Poirier have it. Their evocative programs pull the viewer right into the spirit of the performance and that ability has propelled the young team quickly towards the top of the international junior dance field.

Demonstrating a maturity far beyond their years, the 17-year-old Crone and 16-year-old Poirier could easily pass for dancers five or ten years older. The 2007 Canadian junior dance titlists had an impressive array of accomplishments this season, which included a well-deserved silver medal at the 2008 World Junior Figure Skating Championships where they edged out several experienced Russian and American teams. That was a strong leap from their ninth-place finish in 2007.

“We worked really hard,” Crone exclaimed. “Our original goal was the top five, so it was the cherry on the cake to come second. It was a surprise, but a good surprise. I think it will give us a nice push for next year.”

The dancers, who have been paired since 2001, won both of their ISU Junior Grand Prixs in Miercurea Ciuc, Romania, and Zagreb, Croatia. They were disappointed when they only finished fourth at the 2007-08 Junior Grand Prix Final in Gdansk, Poland, but it motivated the team for Junior Worlds.

“After the Junior Grand Prix Final, we looked at the top teams that medaled and we saw what we needed to do to be medal contenders,” Poirier said. “We went home and trained really hard and focused on what we needed to work on. I think all our hard work paid off.”

At Junior Worlds, the couple scored a personal best in both the original and the free dance, and were awarded level 4s for all their elements in both dances. Skating close together throughout their free dance, they demonstrated the passion of the dance.

That wasn’t an accident. “We really focused at the beginning of the season when we did our choreography to make sure that everything was extremely clear,” Poirier said. “We wanted the judges to see every single turn in the footwork and every single position in the lifts or spins to make sure that we maximized on our technical points and levels.”

“We really worked on the technical aspects of the dance,” Poirier continued. “We were especially pleased with our performance because we really hit all the points we had been working on after Nationals. At the beginning of the season, we were told we needed to work on more speed. I think the free dance had a lot more speed there. It’s very exciting for us to show that we can keep the technical difficulty up as well as the performance.”

“I feel our performance was very strong,” agreed Crone. “Earlier in the year, there wasn’t as good pizzazz and connection, but this was very good for us and we worked so hard to get that out. We tried to portray to the audience and have a connection with each other, so we did that and we also kept our speed. We did all that we wanted to do.”

Even at their young ages, the dancers are already credited with inventing new moves. One involves Poirier crouching in a position similar to a shoot-the-duck while Crone balances on her knee. He lifts her and spins while she maintains her position.

“We were just fooling around one day a couple of years ago doing spins,” Poirier recalled. “Our coach noticed that I was already holding Vanessa’s back and neck and told me to try it with my foot off the ice. Getting her into the right position was pretty awkward, but we worked it out.”

This season, the team competed as seniors for the first time at Canadian Nationals, placing fourth overall. “Our goals for the season were to make the senior international team and finish in the top five at Junior Worlds, so we’re happy,” Crone noted.

Both of the skaters competed in singles as well as dance at Canadians. They also competed together in pairs a few years ago. Poirier was the more successful of the two in singles, winning a silver medal in junior men. He was third in novice in 2007. “My goal was to medal at Nationals,” Poirier said. “Now I can do some junior internationals. I was focused on consistency in my jumps this year. I was getting close to my triple Axel, but not close enough to use it. In the summer, I’ll work on it more seriously.”

Crone placed 13th in junior ladies. “I was injured for a bit,” Crone explained. “I strained a tendon on the top of my foot, but it only hurt me in singles. It didn’t affect me in dance. I was happy because my goal in singles was to make it to Nationals and finish in the top 15.”

Carol Lane and Juris Razgulajevs are the primary coaches for Crone and Poirier, who train in Scarboro, Ontario. They also choreograph the dancers’ programs. Crone and Poirier usually work on ice for three hours a day, six days a week for dance. Poirier adds another two hours in singles sessions with Mark and Jana-Kim Batka in Richmond, while Crone spends three hours a day on singles with Brian Orser and Ernest Pryhitka in Toronto.

The couple used Blue Shawl by Petercurski and Gypsy by Boutouk in their folk-country original dance. “Our coach found the music,” Crone said. “We liked the program because it had a good story line. We were trying to portray poor Romanian gypsies, showing how the not-so-rich live.”

For their free dance, they used A Los Amigos, a tango by Armando Pontier and Federico Silva. “We did really well in the tango last year in our original dance,” Crone stated, “so we had a real comfort level with the tango. When our coach brought us the music, we liked it right away. Paul and I really connected well in the tango.”

For a gala program, Crone and Poirier skated to Gravity by John Mayer. “We wanted to do something completely different from our other programs,” Crone stated. “We wanted to try the blues and we really love John Mayer. It’s a love story so it’s easy to express to the audience.”

They both had two new programs for singles. Poirier used Magic Melody by Floris Klinkert for his short and Flight of the Condor, Old Thatched Cabin and Condor Dance by Incantation for his long, while Crone chose to skate to Dark Eyes. “I like to try different genres,” Crone said. David Wilson, Ellen Burka, and Mary Angela Larimer choreographed her singles programs, while the Batkas choreographed his. Poirier plans to have two new programs again for 2008-09.

Both Crone and Poirier are juniors in high school. Crone plans to study fashion design at university, but Poirier has no clear plans.