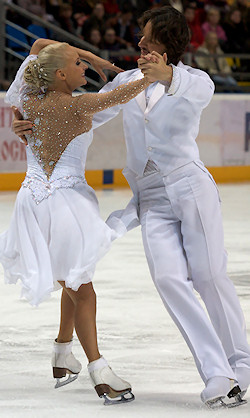 The fifth event of the 2008-09 ISU Grand Prix Series continues with the Cup of Russia which is being held in Moscow, Russia at the Ice Palace Megasport.

Approximately 58 skaters from 16 different countries are competing for points and global prize monies totaling $180,000 in U.S. dollars. The points will go toward qualification for the Grand Prix Final of Figure Skating in which the top six competitors from each discipline will be invited to compete for a total purse of $272,000 U.S. dollars.

Cup of Russia kicked off on Nov 21 with the Compulsory Dance.

USA’s Meryl Davis and Charlie White currently sit in third in with 35.77 points.

Domnina and Shabalin, who have done two Free Dances to waltz rhythms and are currently using it for their Original Dance, are generally considered to be one of the best ‘waltz’ teams in the field. They lived up to that reputation by delivering a flawless performance in which their dance floated across the ice as they efficiently used their upper bodies to emphasize the rhythm.

“We are happy with the way we skated,” said Shabalin. “We’ve worked on a few things since the Cup of China and it paid off when we look at our technical score. However, we still have problems with our costumes and need to skate in costumes that are a few years old. Emotionally we could have skated better.”

Teammates Khokhlova and Novitski were also very expressive, changing the dance holds and free leg positions here and there to better present the lilting character of the dance.

“We felt we skated better and with more confidence than at the Cup of China,” said Khokhlova. “Obviously the first competition is always difficult, and now we know where to go and what to strive for.”

Davis and White presented a lovely interpretation of the dance, however, they seemed to lack the power displayed by Domnina and Shabalin. The Americans also appeared to have some timing issues towards the end of the dance.

“I think we skated fairly well and we’re looking to attack a little bit more,” commented Davis. “I think the feeling of the Viennese (Waltz) comes a little more naturally to us (as opposed to the Paso Doble that they performed at Skate Canada). We’ve always felt the Waltz, but we improved a lot on the Paso this year, so it’s hard to say which one we prefer.”

Italy’s Anna Cappellini and Luca Lanotte are currently a notch below the top three teams for a secure fourth place with 32.57 points. In terms of lines and expression, the young couple was among the best of the field, however, their pattern appeared to be smaller than that of the leaders.

Anna Zadorozhniuk and Sergei Verbillo of the Ukraine are fifth with 30.16 points, followed by Lithuanians Katherine Copely and Deividas Stagniunas (29.57 points).