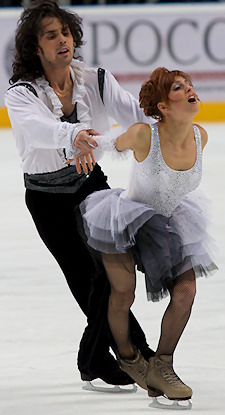 In the dramatic showdown, Russia’s Jana Khokhlova and Sergei Novitski prevailed over their more decorated compatriots Oksana Domnina and Maxim Shabalin to win their first Grand Prix gold medal of their career.

USA’s Meryl Davis and Charlie White, who stood in fourth after a disastrous Original Dance, placed second in the Free Dance and moved up to third place overall capture the bronze.

Khokhlova and Novitski opened their free dance to Paganini’s Caprise 24 and Rhapsody on a Theme by Paganini with a level four twizzle sequence executed in perfect unison, and the good start allowed the 2008 European bronze medalists to leave the anxiety behind and deliver the rest of the program with power and confidence required by the music.

The dance, which tells the story of Paganini and his muse, moved from one choreographic highlight to the next with expressive connecting moves while making good use of Khokhlova’s flexibility and passionate presentation.

“After Cup of China we worked on lifts,” offered Khokhlova. “We modified the lift in the Original Dance to make certain that the judges saw that I’m not using the second hand, and we worked on step sequences and the execution of lifts. We have a lot of positive emotions right now.”

The Russian Champions received a level two for their circular step sequence and a level three for the diagonal step sequence, however, the rest of their elements earned level fours. This allowed them to score a seasonal best of 91.20 points to place first in the free dance and overall (187.62 points).

“It is our first medal and it’s especially precious that it was won here in Moscow in front of the home crowd,” said Novitski.

Both skaters also thanked their coaches.

Davis and White improved on their disappointing outing in the Original Dance to deliver a clean performance to Samson and Delilah.

“I wish I knew what happened exactly,” said White of the Original Dance. “There was no particular reason – just some mental errors – little things here and there which added up over time. Everything was good – the blades were ok and Meryl did well.”

The students of Igor Shpilband and Marina Zueva posted the highest technical score of the night, executing level three step sequences and getting a level four on all other elements. Their intricate choreography moved well with the changes of music – from slow to seductive, and finally a passionate ending.

The U.S. silver medalists were able to match the increase of the tempo and end the program on the powerful note, and earned 91.16 points to place second in the free dance. With a total score of 170.61, they managed to pull up to third overall.

“Skating better in the Free Dance was a matter of training,” offered White. “We knew what we had to do. Just take one step at time. Our confidence grew as the program went on. We just needed to get past that Original Dance.”

“The audience was very supportive here,” added White. “Especially in the original dance; I really felt that they felt bad for us. It’s hard to compete in Russia against the Russians, but we always felt their presence and support. It was great.”

Overnight leaders Domnina and Shabalin slipped to second place overall (184.66 points) after they failed to achieve the desired levels of difficulty in their powerful Spartacus routine. The music choice seems right for the 2008 European Champions, who are known for excellent basic skating skills and great lines, but the performance in Moscow failed to match the power of the music.

“The program is still fresh,” explained Shabalin. “We started the season late, but we have tried our best – especially emotionally, and perhaps we simply got carried away. I would not say that the third day of the competition was harder for me than the first, but I still haven’t completely recovered from my [knee] injuries.”

Domnina and Shabalin’s lack of preparation showed in their step sequences and combination spin which received only a level two. The students of Natalia Linichuk and Gennady Karponosov also received the same level for their impressive first part of a combination lift. The team had the lowest basic value of all competitors, and placed third in the Free Dance with 87.25 points.

“It’s hard to say anything,” said Domnina. “We made mistakes and our technical score was quite low. We have to draw some conclusions from that and go back to work. We didn’t not have any particular reasons for mistakes, it just was not our day.”

“Competitions are the best training,” Domnina continued. “Of course we could have stayed in the U.S. and hope for some miracle to happen – for Maxim’s leg to stop hurting and for the elements to work perfectly from the start, but we decided that we needed to compete and I think it was the right choice.”

Anna Cappellini and Luca Lanotte of Italy delivered a touching routine to music from the Love Story soundtrack, but finished fourth in the Free Dance (82.94 points) and slipped to fourth overall (169.76 points).

The Italians were perhaps the most prepared of all the competitors, executing all required elements with ease and confidence, but their diagonal step sequence received only a level two. Despite the great acting skills demonstrated by both dancers, as well as the ability to retell the famous movie script through a complexity of transitions and choreography, their dance did not match those of the leading couples. They did, however, succeed at capturing the hearts of the audience with their soft and gentle style.

Israel’sAlexandra Zaretski and Roman Zaretski pulled up from seventh to fifth overall (151.43 points) after placing fifth in the Free Dance (76.11 points) after a determined performance to Webber’s Jesus Christ Superstar.

Anastasia Platonova and Alexander Grachev of Russia placed sixth in the Free Dance with an intense and intricate program to Nocturne by Arno Babadganian, but remained in seventh place overall.