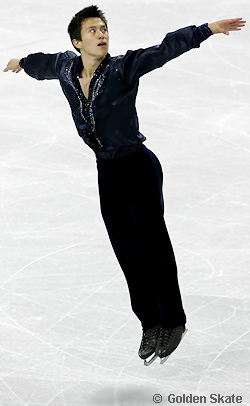 Patrick Chan, 18, of Canada won the Men's title and improved all three personal best scores at this event.

After winning silver medals in the pairs, dance, and ladies competition, Canada’s hope of winning a gold medal rested on the very capable shoulders of 18-year-old Patrick Chan.

The two-time and reigning Canadian champion skated a great program that thrust him into the spotlight, earning the second best short program score in history. Chan had a seven-point lead heading into the freeskate, so he had some room for error.

However, American bronze medalist Evan Lysacek had other plans. A two-time national champion himself, Lysacek threw down the gauntlet immediately with a quadruple toe loop, a move that has been elusive to him all season in competition.

“This is my first one this season to land successfully in competition,” said Lysacek about the quad. “It was starting to be a monkey on my back this year. They had been going great in practice and warm ups, but they weren’t happening in competition. So tonight I was trying not to do so much in the warm up since I had to go first. I was trying to save energy, and that mentality worked really well for me.”

Lysacek skated with control throughout his Rhapsody in Blue program, paying attention to every minute detail, and made only one noticeable mistake on a triple Axel. Lysacek did land seven clean triples in addition to the quadruple jump, and ended his program noticeably relieved and excited.

“I was really prepared for the U.S. Nationals, but it didn’t go well,” Lysacek explained. “I definitely wanted to leave that behind, so I thought it was important to compete here.”

With a freeskate total of 155.50 points and a competition total of 237.15 points, Lysacek had to wait and see if his score would hold up for a medal.

“I had a little slow start, but I’m hoping to peak by the World Championships,” added Lysacek. “This was just a good stepping stone for me. The competition (Four Continents) has changed so much. A lot of the top athletes would pass and not come and they would take a rest and get ready for Worlds. And now it’s become sort of the super power competition for the Men and for the Ladies.”

“With the exception of Brian (Joubert), I think the top contenders in the world were here and the strength in the overall competition was remarkable,” Lysacek added. “So I’m proud to have won a medal among that difficult field.”

Skating later in the competition, Chan had his work cut out for him. Without a quad in his arsenal, Chan knew that he would have to skate clean to win the title.

Chan opened with a beautiful triple Axel, and landed three more triple jumps before the midpoint in his Rachmaninov program. However, the Ottawan then popped an intended triple Axel-triple toe loop combination into a single-double.

“I am a bit disappointed in popping the Axel,” admitted the 18-year-old, “but I had to stay focused on the rest of the program, so I really couldn’t dwell on it. I am happy with how everything else went.”

Nevertheless, Chan recovered beautifully, landing three more triple jumps, and was rewarded with high scores on his non-jump elements to overtake Lysacek for the win.

“It’s just overwhelming, I think,” Chan said of the victory. “And to thing that it is my first Four Continents, I think that I did pretty well. It’s great momentum heading into the World Championships, and it will definitely help my confidence.”

Chan earned 160.29 points in the freeskate and 249.19 points overall, eclipsing all of his personal bests in this one competition.

“[Now] I just have to go to Worlds and skate two clean programs like Jeff (Buttle) did,” said Chan. “I believe now if I do both triple Axels and all the other triples in my long program as well as a clean short, I think I could get a gold medal at the Worlds.”

Finishing in third place was Japan’s Takahiko Kozuka, the two-time Japanese silver medalist. Kozuka, the son of 1968 Olympian Tsuguhiko Kozuka, had an uneven performance with his Romeo and Juliet program.

“Before my performance, I was a little bit nervous and I didn’t know how it was going to be,” confessed the 19-year-old, “but I think it was good enough for me and I enjoyed it.”

After falling on his opening quadruple toe loop attempt, the 19-year-old landed six triple jumps before making another mistake on a triple Axel.

“In yesterday’s practice I made (the quad), but in this morning’s practice I did not,” explained Kozuka. “I felt confident I could do it, so I talked with my coach and we put it in.”

Kozuka finished strong, and fought for every point in the second half of his freeskate, earning 145.15 points in the freeskate and 221.76 points overall.

“Of course I would have liked to have skated better,” Kozuka said with his trademark smile, “but I will work harder to put out better programs for the World Championships.”

Moving up from sixth place after the short program, Nobunari Oda from Japan skated similarly to his teammate and opened with a fall on his quadruple toe loop attempt. After successfully landing three triple jumps, Oda also struggled with a second triple Axel before nailing four other triples.

“I think that nerves were quite a big paring of my performance,” Oda admitted. “I would like to take this experience as a starting point to work on things. I was having the kind of nerves where I couldn’t get any power in my body. I felt weak.”

In the end, the Japanese Champion was able to edge out his countryman for third place in the freeskate with 145.22 points, but just missed the podium with 220.26 points overall.

U.S. Champion Jeremy Abbott had a credible performance in the freeskate, but doubled an intended quadruple toe loop to start. In all, the Grand Prix Final Champion landed six triple jumps and fell on a triple Lutz, finishing fifth place overall.

“This was not what I consider a good performance by any stretch of the imagination,” Abbott confessed. “I had some goals for myself and I came just short of them.”

Chan’s teammates Vaughn Chipeur and Jeremy Ten both skated to personal bests in the freeskate and overall to finish in sixth and seventh respectively. Chipeur eclipsed his previous total score by 16 points, while Ten decimated his own by a whopping 32 points.