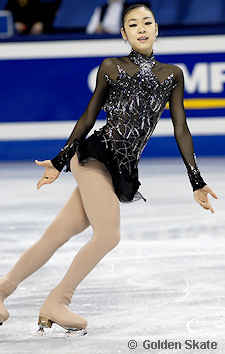 South Korea’s Yu-Na Kim, 18, placed first in the Short Program with her routine to Danse Macabre by Camille Saint-Saëns.

It was supposed to be a battle of the two super powers of ladies figure skating. World Champion Mao Asada of Japan taking on two-time Worlds bronze medalist Yu-Na Kim of South Korea.

Asada and Kim have arguably created figure skating’s most interesting rivalry in this Olympic cycle. The last time the two met was at the Grand Prix Final in December in Kim’s home country, with Asada coming out on top. In Vancouver, however, Asada had perhaps skating’s worst meltdown of the season, while Kim had a record-breaking evening.

Kim skated a beautifully mischievous and perfectly off-center program to Danse Macabre that electrified the crowd, breaking her own record in the process.

“When I was preparing for the Four Continents, I tried my best to stay healthy,” said the oft-injured Kim. “Last season I was having injuries in February, so I couldn’t prepare so well. So this season I’m in my best condition, and to have achieved my best score makes me very happy.”

The Canadian-trained Kim was solid from her opening triple-flip triple toe loop combination all the way to the end. Had it not been for a level three step sequence, Kim could have been as close to perfect as a skater has ever been since the new judging system was implemented.

“I am very happy to be here where the Olympics will be next year,” Kim said with enthusiasm. “And of course, I am happy that I got a new personal best score.”

Kim was so precise that she earned positive grades of execution (GOE) on each of her executed elements, garnering the leader 7.30 points more than her start value. In addition, the 18-year-old was rewarded with the highest program component scores of the night – a well-deserved victory for one of the most inspiring performances in the history of skating.

“It took me a long time to clean up this program,” explained Kim, “and I am so happy that I did it today. I still can improve my steps and spins.”

Kim’s total score of 72.24 points eclipsed her previous best by .29 points – a record that had stood for almost two years.

Asada, on the other hand, struggled from her opening triple flip-triple loop, getting called for an under rotation on the back half of the combination. The reigning World Champion pulled herself out of contention altogether when she doubled her next element – a planned triple Lutz.

“My jumps have not been great since practice this morning,” admitted the 18-year-old. “That just carried over to the program unfortunately.”

The Japanese champion did land a clean double Axel, but looked nervous throughout her routine to Clair de Lune as she finished the short program in sixth place.

“I’m not satisfied with this performance,” said a sedate Asada. “I want to forget today’s bad performance. I want to set my mind positively for the free skate, and want to give my best.”

Asada was also not rewarded with high levels on her spins, earning just a level two on her flying sit and layback spins. With a disappointing score of 57.86 points, the defending champion will have to hope for a miracle to pull up into gold medal contention.

In second place is the five-time and reigning Canadian champion Joannie Rochette, who overshadowed the World Champion with a confident skate.

“I’m really happy with how things went tonight,” said Rochette. “I think that this is my harder program, so after nationals, we made some changes. We changed the elements order and some of the elements, but with only one week to really work on it, this is what I could do. Leading up to Worlds, we will continue to work out the program, but I am very happy with the result so far.”

Rochette opened her Summertime routine with a beautiful double Axel, and then opted for a triple Lutz-double toe loop combination which was originally planned to be a triple-triple.

“After I landed the first triple, the landing wasn’t good enough to add a triple onto the end,” explained the 23-year-old. “My goal was to do a clean program, and I wanted to see all of the changes that we had made in one week.”

The reigning Four Continents silver medalist performed with a sophisticated coolness, which helped her to earn a new personal best of 66.90 points.

“I’m just glad with the overall performance, with so little time,” said Rochette. “And achieving my current best without the triple-triple is very good for me. Of course I still want to challenge myself and land it in competition before I finish my career for sure.”

Making perhaps the comeback of the season thus far is Rochette’s teammate, Cynthia Phaneuf, the 2004 Canadian champion. Phaneuf was thought to be Canada’s rising star after she won the national title, but injuries kept her sidelined for almost two seasons. Returning to competitive skating in the fall of 2006, Phaneuf has struggled to regain her form until tonight.

“I am really excited to finally put out a clean short program,” said the composed Phaneuf. “It has been since 2005 for me.”

The two-time and current Canadian silver medalist skated a clean and technically pleasing program to Aaron Rosand’s Nocturne, complete with a triple Lutz-double toe loop combination. She is in third place after the short program, and increased her personal best by over three points to 60.98 points.

“Nothing was really different tonight than at nationals,” Phaneuf said. “I think that my confidence was just higher. This is the breakthrough that I have been looking for.”

Another surprise in the competition is the fourth place finish of Japan’s Fumie Suguri. After winning a silver medal at the 2006 World Championships, Suguri struggled to place high enough to get out of her national championships. This season has been somewhat of a rebirth for the 28-year-old as she medaled at both of her Grand Prix events, and earned a ticket back to the World Championships with a silver medal winning performance at the Japanese National Championships in December.

“After Torino, I wanted to stay competitive on the same level, but I had a difficult time in perfecting my technique,” Suguri admitted. “I was really tired after the Olympics, but I really love my sport. I created my own goals for when I compete, and I just love figure skating so much.”

Suguri continued, “In the six minute warm-up, they announced me as ‘Fumie Suguri, 28 years old’, and I was like, ‘No! Don’t say that!’ But I still feel like I can bring more to my skating, so that is why I am still doing it.”

Suguri skated like the elder stateswoman of the competition, taking time to commit to each element in her Fanfan program, and using a mature presentation style to complement her technical successes in the program. The two-time olympian landed a triple (f)lutz-double toe loop combination to start, and went clean the rest of the way through the program.

“Of course I am very happy with not only my placement, but I am also pleased with my skate,” Suguri said confidently.

Suguri scored 60.18 points on the night, keeping her hopes alive for a medal in this championship.

Finishing in fifth place was USA’s Caroline Zhang with an up and down program that disappointed the 2007 World Junior Champion.

“It was really shaky,” said the World Team alternate. “It wasn’t my best performance. I really didn’t have much expression.”

Zhang opened with a gutsy try at a triple flip-triple toe loop combination that fell short of rotation on the back half.

“It’s the only bad one that I had done all week,” lamented the 15-year-old, “and I had to do it in the competition.”

The current U.S. bronze medalist scored a total of 58.16 points for her routine to La Bayadere, just edging out the World Champion Asada.

USA’s Alissa Czisny made two big jump errors and had to settle for seventh place, while teammate Rachael Flatt finished just behind her in eighth. Japan’s Akiko Suzuki and Canada’s Amelie LaCoste are ninth and 10th respectively.

The event continues with the Original Dance, the Pairs Long Program, and the Men’s Short Program.