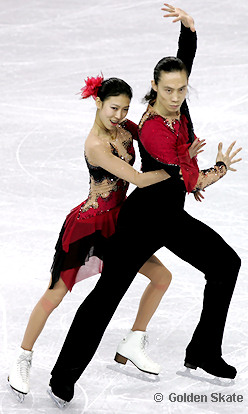 In the 11-year history of the Four Continents Championships, China has won 17 of the 33 available medals. The dominance is even more impressive when you consider that skaters representing China have won eight titles in this competition as well.

Qing Pang and Jian Tong are carrying on that legacy, winning their fourth title and second in a row over perhaps the toughest field that this event has ever assembled.

The gold medalists won big this week, placing first in both segments of the competition, and defeating the silver medalists by more than nine points.

“Before we came to this event, we were very excited especially because this is going to be the venue for the 2010 Olympics,” Tong explained. “We tried to live up to our own expectations, and we were able to do that.”

The Chinese Champions opened with a double Axel-double Axel sequence and then set the tone for the rest of the program by nailing their triple toe loops. The team showcased a high flying triple twist lift along with two beautifully executed throw triple jumps – a Salchow and a loop – to win the competition.

“Last year there were problems with my jumps,” admitted Pang. “I went home and worked on them, and so now I am pleased that my hard work has paid off.”

Tong added, “We worked on two things with (Pang) last summer. The first thing was to strengthen her leg muscles so that she would jump better, and the second part was to increase her weight so that she could do better on the lift of the jump.”

Skating to a medley of sassy tango music, Pang and Tong performed with tension and passion from start, and were rewarded with the best component scores of the afternoon. The 2008-09 Grand Prix Final Champions scored 129.34 points in the freeskate, and 194.94 overall, eclipsing their personal best by three points.

Finishing in second place in their first trip to the Four Continents Championships were Canadians Jessica Dubé and Bryce Davison. The team skated a great program to the music of Carmen, and only had one error on the throw triple Lutz.

“We’re really happy with the way that it went,” Davison said. “We’re pretty sure that there were a couple of errors, like hitting the board on the first lift, but other that that, it was a solid program.”

Like the winners, Dubé and Davison landed a double Axel-double Axel sequence near the start of their program, but instead of toe loops, the duo opted for a nice set of triple Salchows. The Worlds bronze medalists also earned a level four on all of their elements save for the step sequence.

The Canadian Champions see this competition as a positive step towards the World Championships next month.

“There were some rough spots there,” Dubé confessed. “but there is still room for improvement as we head towards Worlds.”

Dubé and Davison earned 121.26 points in the freeskate, and 185.62 points in total to win the silver medals.

Finishing in a disappointing third place were the reigning World silver medalists, Dan Zhang and Hao Zhang of China. Hampered by an injury to Dan Zhang’s knee, the duo made two major errors- a singled intended triple Salchow and a bobble on one of their lifts.

“We didn’t have much opportunity to train together because my partner’s knee was feeling worse just a month ago,” Hao Zhang explained. “I have been hesitant to train with her, so we are lacking practice.”

Skating to The Yangtze River, Zhang and Zhang never really looked like themselves, seemingly skating in a fog from start to finish. Still, the 2006 Olympic silver medalists earned 111.78 points in the freeskate, which allowed them to maintain third overall. However, their total score of 174.98 points is far from a personal best.

Canadians Meagan Duhamel and Craig Buntin had a rough outing in the freeskate, placing sixth, but were able to hold on for fourth place on the strength of their short program. The team made errors on their triple Salchows and the throw triple loop in their Tosca program, and were disappointed with their performance.

“It felt like more of a fight tonight,” admitted Buntin. “We did the best we could. I think that we got most of our levels, but it just wasn’t happening tonight.”

The Canadian silver medalists scored 106.35 points in the freeskate, and 168.43 points overall in their first Four Continents Championships as a team.

Moving up from seventh after the short into fifth place overall, were U.S. Champions Keauna McLaughlin and Rockne Brubaker with an uneven performance marred by mistakes on their solo jumps in the program.

“Not our best – but we’re saving that for Worlds,” said McLaughlin. “We had some mistakes with our jumps, but our goal today was to perform – so, we’re satisfied, but not completely.”

Skating to West Side Story, McLaughlin and Brubaker looked somewhat mechanical on several of their elements, but managed to place fourth in the freeskate despite the errors. The 2007 World Junior Champions earned 109.85 points for their freeskate, giving them a competition total of 164.01 points.

“Skating at our first international championships is definitely a different kind of pressure,” admitted Brubaker. “But sometimes we put too many expectations on ourselves which is how the somewhat mechanical look comes into play.”

U.S. silver medalists Caydee Denney (15) and Jeremy Barrett (24) skated a strong program that moved them up to sixth place overall after a dismal short program.

In fifth place after the short program, USA’s Rena Inoue and John Baldwin plummeted to seventh place overall with a mistake-filled program.