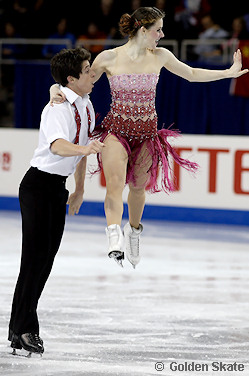 Tessa Virtue and Scott Moir of Canada maintained their overnight lead after their Charleston routine in the Original Dance.

The 2009 Four Continents Figure Skating Championships continued with the Original Dance, the Pairs Long Program, and the Men’s Short Program.

Ice dance was once a waiting game for skaters as they waited their chance to move up the ranks as the teams ahead of them retired from eligible competition.

It used to be that at the end of an Olympic cycle, you could count on most of the more experienced teams to move on to other things, with the occasional team sticking around for a chance at a world medal.

Under the new judging system, skaters no longer have to wait their turn, and it is providing for some interesting results in a sport that used to be rampant with protocol judging.

“I think that it is awesome that teams are being rewarded for technical difficulty as well as the performance aspect at young ages,” said Tessa Virtue. “It’s great to see the depth in skating and to see so new talent coming along. It’s exciting, and it’s inspirational for our sport.”

For example, Tessa Virtue and Scott Moir of Canada burst onto the world scene just two years ago. In their Worlds debut, they finished in sixth place, and then moved up to second last season. Here at the Four Continents Championships, the duo is still not back to their original form before Virtue’s injuries, but they are pushing to win their second straight title.

“It’s definitely not the same pain that I felt before the surgery,” explained Virtue. “It is sort of the after-affects. I’m putting a lot of pressure in it now, but it’s really not that bad.”

Virtue and Moir skated an up and down Charleston that shows great potential should they be able to make up for lost training time. An energetic lift that the duo has coined the ‘Rio Wrap’, named for Virtue’s favorite sandwich shop, was a highlight of their program.

“(Coach Marina Zueva) wanted me to do something twisty, so we worked it out on the floor, and this is what we have come up with,” Virtue explained.

Though the Canadian champs lacked unison in some segments of the program, they felt their routine was much improved since nationals a few weeks ago.

“We are very, very happy with the performance,” Moir said. “We work to improve at each competition, and we are content in know that we have done that here.”

The team scored 60.90 points in the original dance, and their total score of 97.30 points puts them slightly ahead of their training mates Americans Meryl Davis and Charlie White.

Davis and White skated a more secure program than the leaders, but the U.S. Champions were unable to match Virtue and Moir in the program components. In fact, the two teams actually tied on the technical elements score. Davis and White could have threatened for the lead, but did not receive a level four on a normally solid element.

“It’s always great to get the first element out of the way,” White said enthusiastically. “And to nail the twizzles like that sets a good tone for the rest of the program.”

“Technically, the only thing that we are really disappointed in is our spin,” confessed Davis. “We only got a level three, but really we are happy with the overall performance.”

“The callers will typically tell you why you didn’t get the levels that you prepared for,” White continued. “It’s not a little secret. We’ll go home and work on it.”

Skating to a peppy Charleston medley, Davis and White settled for second place in the original dance with 60.42 points, and with less than two points separating the teams, are breathing down the necks of the leaders.

In third place, with perhaps the performance of the afternoon, were American upstarts Emily Samuelson and Evan Bates. The 2008 World Junior Champions skated a wildly entertaining swing program that earned the highest technical elements score of the competition.

“It’s extremely exciting,” Samuelson said with a smile. “We used to look up to these skaters, and now we are being competitive with them. It’s such a great feeling.”

The U.S. silver medalists earned the most level fours in the original dance, earning just one level three on their midline steps.

“I think that the biggest thing for us to improve upon is to mature,” Bates admitted. “This is our first year competing with the big guys and we are a young team. We can do the technical things, but we need to work on the maturity level and the connection between us in order to take things to the next level.”

Samuelson and Bates scored 59.48 points for their efforts, and have accumulated a total of 90.89 points, moving them ahead of Canada’s Vanessa Crone and Paul Poirier who were third after the compulsory dance.

The Canadian silver medalists also skated well, using ragtime music as the backdrop to their original dance in which Poirier sported a drawn in moustache for some added panache.

The Canadian silver medalists also skated well, using ragtime music as the backdrop to their original dance in which Poirier sported a drawn in moustache for some added panache. The home country audience appreciated the young team’s enthusiasm, and showered them with applause as they finished the program.

“We had lot of fun out there,” Poirier said. “We know that that helped the performance, and allowed us to bring out the character of the program to the audience.”

Crone added, “It was extremely better than what we did at nationals. We have worked hard on the twizzles and expression since then, and I think that we did those things well. So, we are both happy with what we did out there.”

Crone and Poirier scored 56.36 points in the original dance, and slipped to fourth place overall with a total of 88.79 points.