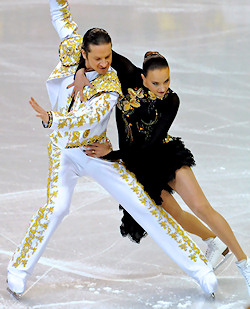 Russia's Oksana Domnina and Maxim Shabalin placed first in the Compulsory Dance with a new personal best at the 2009 World Figure Skating Championships.

The 2009 World Figure Skating Championships are being held March 24-28 in Los Angeles, California at the Staples Center. It is the first time Los Angeles is hosting the event in which a record number of approximately 216 skaters/teams from 52 different countries are competing.

Brazil and Ireland are participating for the first time in an ISU World Championship.

The competition kicked off on March 24 with the Compulsory Dance.

The event got off to a fiery start as sixty skaters burned up the ice with the Paso Doble selected as the compulsory du’jour. The dance was invented by Reginald B. Wilkie and Daphne B. Wallis, and was first performed in 1938. In international competition, the dance has not been competed on the senior circuit since the 1998-99 season, so it was a level playing field, so to speak, for all couples in this competition.

Coming out on top was the Russian duo of Oksana Domnina and Maxim Shabalin, who are making a return to competition after a full year away from ISU Championship events. After a strong fall season capped off with a silver medal at the Grand Prix Final, Shabalin aggravated a knee injury that forced the team to withdraw from the European Championships.

“I’m still continuing my recovery,” Shabalin said of his knee injury. “We started almost immediately to train after the European Championships, but there were a few moments when we were forced to leave out one practice a week because of the problems with my leg. Thank God we went through the process of preparation. We are in the best shape of the season so far.”

In Los Angeles, however, Domnina (24) and Shabalin (27) appeared to be back in top form, earning positive GOEs (Grades of Execution) on each of the scored elements in their compulsory. The team scored a whopping 40.77 points for their Paso Doble, a new personal best, and are more than a full point ahead of their closest competition.

“We maintained the pattern throughout all three sequences which is very important,” said Shabalin. “If you are off even a little bit, you can lose points on the technical mark.”

“The Paso Doble is a little harder emotionally for me (than the other compulsories this season), “added Domnina, “but it was interesting to get into a different image.”

Finishing just behind their training mates, Tanith Belbin and Benjamin Agosto of the United States made a triumphant return to the ice, earning 39.65 points with their interpretation of the Paso Doble.

“We had to make sure that we put out a strong performance,” Agosto said with a hint of relief in his voice. “We’ve really been working hard these last few months to come back and get this dance ready. We felt really confident coming in and we’re really happy with how we skated. It’s a good way to start out the competition, and now it’s an all out dogfight.”

Agosto injured his back at the Grand Prix Final which forced the team to miss the opportunity to perhaps win a fifth straight national title in January. US Figure Skating still named Belbin (24) and Agosto (27) to the team, requiring the duo to pass a series of on-ice tests in order to prove their fitness for this competition. The decision proved to be wise, as Belbin and Agosto skated with a newfound flair that has been absent from their skating in recent years, and the couple earned their highest placement in the compulsory dance at Worlds since 2005.

“I think that this is a great dance to start the competition off with because our mind set is that we are fighting,” said the effervescent Belbin. “We had to fight for months to get through Ben’s injury, and we had to get through last season with the disappointing finish at Worlds. It’s just been a fight for so long that we felt the Paso was the perfect dance to open the door for this event. It’s only the beginning, and we feel like we want even more.”

In third place is the Canadian team of Tessa Virtue and Scott Moir, the reigning silver medalists. Like the teams ahead of them, Virtue (19) and Moir (21) have dealt with an injury of their own this season that caused the Canadian champions to miss the Grand Prix this season. Virtue is still in the midst of recovering from surgery to both of her legs stemming from a condition called chronic exertional compartment syndrome, but the effects did not show in their skating today.

“We were definitely pleased with our performance,” said Moir. “We had a ton of fun. Our goal was to dance and really sell it. What else can you ask for?”

Virtue added: “After Four Continents, we had a good chunk of time to train, and we were able to work on this dance quite a bit. We love the Paso Doble.”

With a total of 39.37 points, Virtue and Moir are in great position to make a charge towards the top of the podium as they prepare to compete in what are traditionally the stronger portions of the competition for them.

Training mates, Americans Meryl Davis and Charlie White, are in fourth place with a new personal best of 37.73 points. Sporting a sleek new look, White demonstrated his technical prowess in this dance, while Davis provided the theatrics for the duo. Davis (22) and White (21) are in prime position to make a run for the podium, and like Virtue and Moir, look to move up with strong technical performances that they have planned for the rest of the competition.

“We wanted to come in and skate better than we ever skated before,” Davis admitted. “I think that we did that. The Paso is an intense dance, and once you get into the character, it is fun.”

“We’re shooting for top three,” added a confident White. “We generally stay away from thinking about placement, but we know if we do the best, the competition will just happen for us.”

Russia’s Jana Khokhlova and Sergei Novitski are in a disappointing fifth after winning three straight titles leading up to this competition. In comparison to the top four teams, the European Champions started slowly in the first pattern of the dance, but were able to pull it together in the final two patterns. Khokhlova (23) and Novitski (27) are just a few tenths of a point behind Davis and White with 37.34 points, which keeps the reigning bronze medalists in sight of the podium as well.

“We have mixed feelings,” said a disappointed Khokhlova. “We like the huge ice rink here. The audience received us quite well. We know that the North American audience is obviously supporting their own skaters, but there are more Russian fans in the arena and this helps. We were very focused. Maybe too much. We have been watching the practices of others, and we knew that it won’t be easy here.”

Skating last in the competition and in sixth place is the French duo of Nathalie Pechalat and Fabian Bourzat, who replicated their placement from last season’s championships. The Paso Doble does not lend itself to Pechalat and Bourzat’s strengths, which is more fluid than the tense dance requires. Still, their total of 36.54 points is a great start for the French champions who get stronger as the competition goes on.

“We skated really well,” Bourzat declared. “Of course you can think that it will be a bit difficult with the ice when you skate last, but we got right into the dance. We have worked a ton on this dance since the Grand Prix, and I think that you can see that.”

Italy’s Federica Faiella and Massimo Scali finished in a disappointing seventh in a season where the team was poised to make a push for the medals stand. After an impressive Grand Prix season and a silver medal at the European Championships, it looked as if Faiella and Scali would challenge for a medal here in Los Angeles.

“We felt good coming into this competition,” Scali said. “We had a great month after Europeans to practice and change a few things so that we could improve. I think today we did a really good job. It was powerful and concise.”

Great Britain’s Sinead Kerr and John Kerr are in eighth place, exactly where they were a season ago.

“We got a season’s best, and that is what we were kind of aiming for,” explained Sinead. “The dance itself went pretty well, and we are happy with it,” added John.

Pernelle Carron and Matthieu Jost of France are in ninth place in their first trip to the World Championships, while Canadian silver medalists Vanessa Crone and Paul Poirier are in 10th in their debut. Americans Emily Samuelson and Evan Bates are in 13th place, but are less than two points behind Carron and Jost heading into the Original Dance.