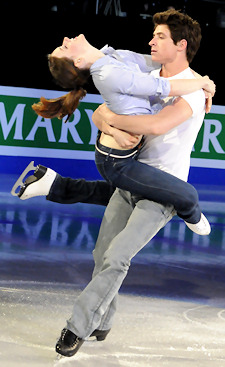 Tessa Virtue and Scott Moir of Canada perform an exhibition routine to Jack and Diane.

Canada’s Olympic hopes in ice dancing for the upcoming Games are riding on the shoulders of Ontario’s Tessa Virtue and Scott Moir. The couple, only 20 and 22 respectively, has skated together for 13 years.

The two-time Canadian Champions finished with silver and bronze medals at the last two World Championships and have won both the World Junior  and Four Continents Figure Skating Championships.

They open the 2009-10 season in Paris with Trophée Eric Bompard, and then close with Skate Canada. The team is happy with their schedule.

“Having the first and the last Grand Prixs with time between is an advantage,” Moir noted. “We like going to Paris so we’re excited about that. Just being there makes us happy.”

“We’ve skated in all the rinks that we’ll compete in this season,” he continued. “We’re very familiar with Kitchener-Waterloo since it’s near our homes and we trained there for years when we were younger. And we have training camp in Vancouver in September, so we have another chance to skate in that rink again.”

“We haven’t thought at all about what we’ll do next year,” Moir admitted, “but we’ll do the whole season, including Worlds. We owe Torino a little something. We didn’t go to the last Olympics and didn’t skate well when we there at the Grand Prix Final. And we don’t have a gold medal at Worlds.”

The dancers first premiered their new programs in a competitive atmosphere at Thornhill in Toronto, Canada earlier this month.

“We’re doing a flamenco for the original dance,” Moir noted. “We didn’t want to be Russian gypsies as we’ve done that before and we’re past it. We had some other ideas for the music, but it took a while longer to find the right piece.”

“We originally wanted to do a Canadian folk dance because that would have been special for the Olympics,” Virtue said. “However, we couldn’t find anything that worked with the elements we wanted to do.”

“The music is Farrucas, a folk guitar piece,” coach Marina Zueva said. “When I worked with Gordeeva and Grinkov on their flamenco short program for 1994, I worked with a lot of flamenco dancers. They gave me more than ten CDs of flamenco music and I’ve added to it for 15 years so I have lots of ideas.”

“As soon as we found the flamenco music, we loved it,” Virtue added. “We’ve been working since June with Christina Scott, a flamenco dancer who trained in Spain and lived there like a gypsy. She brings in her costumes from Spain and we play dress up. I wear the big dresses and earrings and Scott even wears a vest. ”

“She usually comes three times a week and works with us for about an hour and a half,” Moir said. “We want to get the authentic feel for the dance. It’s so different from the tango or the paso or any other Latin dance we’ve done.”

“It’s hard to translate the steps to the ice,” Virtue continued. “We wanted to be able to tap our skates but that doesn’t work. But we clap our hands and I swish the skirt.”

“We’re not using a fan or any other props,” Moir said. “Christina said props would take away from the movements in the dance.”

“I’ll have a large skirt,” Virtue said. “That’s our prop. It’s a lot more fun to skate with a big skirt. We don’t have the final dress yet, but we’ll be practicing in it to be sure we can do all the lifts.”

“We’ll have new lifts this season but actually we’ve been spending most of the summer working on the free dance,” Virtue said. “We’re trying to develop the whole package so we’re focusing on the little details of the program.”

“Once we learn an element, it doesn’t take us long to get it into the program,” Moir noted.

“Our free dance is classical,” Virtue said. “Marina found the music for us. It was a funny moment. She wanted us to hear the music without anyone else so we went out to her car in our skates and sat and listened to it. We loved it immediately.”

“The music is Gustav Mahler’s Symphony No. 5, Adagietto,” Zueva explained. “First of all, it’s music that’s not often used. It has a unique theme and I thought only Tessa and Scott could express the way I feel about the music.”

“I think the German composers are better than anyone else,” she continued. “They can make music that is very bright. I picked pieces from the symphony that are very fast, but very bright.”

“There’s an interesting story behind the music,” Zueva explained. “Mahler wrote the music and then gave it to a musician to play it. She (the musician) read between the notes that the music was an invitation to marriage. Weddings are always a place where there is a lot of love and people see a bright future. Love is everything, love for each other, love for the earth.”

“Every time I listen to this music, I have a feeling that I will have a great life,” Zueva added. “If you can feel the music, you can connect with the audience and make the people feel good and I think this dance will create this kind of atmosphere.”

“We didn’t want to settle for anything that was less than perfect for us,” Moir added.

“The program was finished on July 1,” Virtue said. “It was kind of neat to have it for Canada Day. Marina had a vision for the program and we had a group session where the four of us worked out the program. That was the first time we did that.”

The dancers are thinking of a new gala program, but may continue using last year’s exhibition program, Jack and Diane, for the Grand Prix season as a backup.

As for this season’s compulsory dance, the Tango Romantica and the Golden Waltz, Moir said, “We’ve competed both the dances before but so have most of the older couples. The difficulty of the dances will work in our favor.”

The dancers train for four to five hours a day, five days a week at Arctic Edge Ice Arena in Canton, Michigan with Igor Shpilband and Marina Zueva. This is their sixth season with their coaches, a fact the dancers added up by ticking off their free dances.

“We also have a couple of hours off ice training every day, not counting warm-ups,” Moir added. “That includes our ballet classes. I’ve been doing ballet for the past three years here. It’s not something I wanted to do initially but I can recognize that it’s going to help and for classical pieces, it’s a necessity.”

Last season, the skaters were extremely limited in their training as Virtue recovered from surgery on her legs in October due to Chronic Exertional Compartment Syndrome.

“I didn’t get back on the ice until the beginning of December and then I had to learn to skate again,” Virtue said. “It was really too soon after surgery to try it but we thought we could do it. We were probably crazy to try since that was about three months earlier than most athletes recover from surgery.”

“The good thing is that we know now that we can compete with so little training,” he continued. “We don’t want to do it again but it was a great learning experience.”

“It’s much, much, much better now,” Virtue said. “Last year I couldn’t skate without pain. I’m just so happy to just be able to skate again.”

“I still do lots of physio,” she noted. “Our coaches have us on a good schedule with skating, breaks and off ice training so I haven’t had any more problems.”

Virtue is a freshman at the University of Windsor and commutes across the border twice a week for classes, even during the summer. She’s studying for a degree in psychology. “I’m finishing up some stuff,” Moir said, “but I’m still undecided.”

Other than an occasional round of golf, the skaters don’t have time for many off ice activities other than visiting their families in Canada.