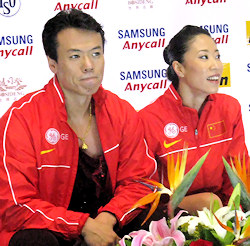 China's Xue Shen and Hongbo Zhao observe their scores at the Cup of China.

It is an Olympic season and it is the season of comebacks. Three-time World Champions and two-time Olympic bronze medalists Xue Shen and Hongbo Zhao celebrated a successful comeback to competition at the Samsung Anycall Cup of China last weekend. The couple not only won the event, but also won with a significant advantage over second-ranked teammates and current World silver medalists Dan Zhang and Hao Zhang.

This summer, Shen and Zhao prepared their return to competition in secrecy. The practice of the Chinese top pair skaters was closed to the public and to the media. They worked with renowned choreographer Lori Nichol and created two new programs: the short to Who Wants to Live Forever and the long to Adagio by Tomaso Albinoni. “Our short program is in an unobtrusive style and shows passion,” Shen explained. “The long program Adagio is a love story,” her husband added.

The Samsung Anycall Cup of China was Shen and Zhao’s first competition since the couple retired after the 2007 World Championships where they claimed their third title. The crowd at the Beijing Capital Gymnasium loved their heroes and greeted them with thunderous applause when they stepped onto the ice.

The team  skated very well in the short program; even the side by side triple toe was spot on. It was this element that Zhao had ruptured his Achilles tendon  in the summer of 2005, and as a result,  put their Olympic dream in jeopardy. However, the team overcame this bad injury to take the bronze in Torino.

The solo jumps have been Zhao’s weak spot in the past, but now they looked solid in practice. “We had problems with the jumps before, but now we are healthy, and so they are okay,” the 36-year-old pair skater explained.

In the long program, there were a few glitches. He stepped out of the triple toe, she struggled with a double Axel, and their pair combination spin received no credit as it lacked rotations. On the other hand, the big triple throws were as impressive as ever.

“We are very happy that we were able to fulfill our plan that we have set when we started fully training again in May,” Zhao said. “Our performances were quite good, but not yet perfect. I’m even a little surprised at our high score. Our jumps could have been better. We still can do better and we need more energy,” he analyzed. His partner and wife agreed: “Not all of our elements got a high level. Our pair spin received no level; that means zero points. We underrotated it. If we had done the spin correctly, we obviously would have achieved a higher score.”

Nevertheless, their score was high at 200.07 points. World Champions Aljona Savchenko and Robin Szolkowy of Germany have a personal best total score of 203.48 points which they achieved at the 2009 World Figure Skating Championships.  However, their long program wasn’t perfect either as Szolkowy fell during the footwork section.

Shen and Zhao proved in Beijing that they are definitely strong challengers for the Olympic gold medal. This medal is what they came back for as it is missing in their impressive collection.

“We felt that we are still competitive and we want to try it,” 31-year-old Shen said. “We want to go to the Olympic Games and we are following the plan of our coach (Bin Yao) step by step.” “We came back, and it is a great feeling,” Zhao added.

The couple obviously enjoyed competing again and they hugged each other happily and with relief  after their free skate. Zhao shook his fist in triumph when their score came up and they knew that they had won. “Our goal is to give our best in each competition,” he said later.

It is four months until the Olympic Winter Games in Vancouver. “We still have a lot of work to do,” Zhao acknowledged. He knows that they need to add more speed, more flow, and more transitions to their programs. “The most important thing is that we stay healthy,” Shen noted. “Since we’ve started to train seriously in May, we’ve both had some injuries.”

The skaters are experienced and know how to pace themselves. Their return has definitely added excitement to the pairs field this season, and will make the discipline event at the Olympic Games even more competitive. However, Shen and Zhao didn’t return just for a shot at Olympic gold. “We still love skating so much, therefore we came back,” said Shen. And everyone could see that in Beijing.