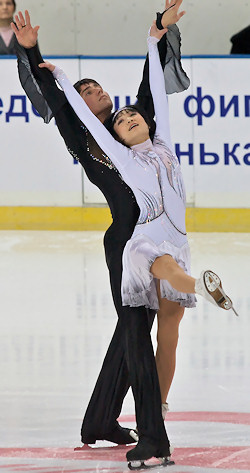 Yuko Kavaguti and Alexander Smirnov of St. Petersburg (SPB)   prevailed over Maria Mukhortova and Maxim Trankov (SPB) with a 3-point-lead in the Pairs Short Program.

The students of Tamara Moskvina were the next to last to skate, and  gave a commanding and inspiring performance to Camille Saint Saens’ The  Swan. The defending champions who kept last season’s  program, were able to capitalize on the mileage and enchant the  audience with their excellent flow and strong elements. The team had  minor problems with a catch on the triple twist, but landed clean  side-by-side triple toeloops and a throw triple loop to receive 78.01  (41.27/36.74) points.

“Our impression from the performance is very simple: we skated well,” said Smirnov. “Both me and Yuko are satisfied. However, we had not have a chance to  ask Tamara Nikolaevna [Moskvina] for her opinion, so we don’t know  whenever we fulfilled her goals or not. The beginning of the season  was rather tough for us. I could even say that were discouraged, but  we had felt strong support from our team: Tamara Nikolaevna, Igor  Borisovich Moskvin, our choreographer Tatiana Druchinina, and all other  people who believed in us. We will try to live up to their faith  tomorrow.”

Mukhortova and Trankov, who skated first out of 12 couples, opened their  Appassionata program with a strong triple twist, but Mukhortova stepped  out of her triple toeloop.  The current silver medalist were otherwise clean, and the overall impression from their  performance was very strong. The team appeared to be relaxed on the  ice and their lines and unison were the best in the field. They currently sit in second place with 74.82 (38.87/35.95) points.

“Skating first is always a lot of added pressure,” Trankov later commented.  “It requires more focus than skating second, third or later.  Unfortunately, some elements were not that strong today. We made a  mistake on the toeloop, but overall it was one of our best  performances. In terms of choreography and presentation, I felt that we  skated really well. I would also like to thank the audience for their  support – it was phenomenal. We are not always so well received by the  public.”

Vera Bazarova and Yuri Larionov from Perm (PRM) made the first step towards  securing a place on the Olympic team. The team made a mistake on the side-by-side   triple toeloops with both skaters putting hands down on landing, but  their triple twist and throw triple loop was strong, and the audience  loved their lyrical style. The students of Ludmila Kalinina received  62.26 (33.23/29.03) points and are currently third.

“We wanted to skate a clean program,” said Larionov. “Unfortunately we  made a mistake.”

Bazarova and Larionov had to sit out last season due to Larionov’s ban from  sport. He had tested positive for Furosemide in a random  off-competition test in December of 2007. The skater claimed that he  had taken his father’s drug for an extremely strong  headache. However, since it happened before the new anti-doping code was  put into action, they are eligible for the Olympic Games.

“We never stopped skating,” said Larionov. “We tried to push the thoughts of  disqualification away and just  concentrate on day-to-day work. We  tried new things and accepted some and rejected others. We  worked on new programs and on improving our level.”

Lubov Ilushechkina and Nodari Maisuradze of Moscow (MOS) struggled with most of their  elements, but finished fourth due to the strong presentation skills  and complex choreography of their routine to Yesterday routine. Ilushechkina  put a hand down on triple toeloop landing and stepped out of a throw  triple loop, while Maisuradze did not catch his partner by her  waist on triple twist.  The 2009 World Junior Champions also received  only a level one for their final pairs combination spin and scored 59.67  (30.97/28.70) points.

“I am rather upset with Luba today,” said Maisuradze afterwards. “She appeared uncoordinated. I thought we did not skate that well. Even  with the mistakes, we still could have presented the program better.  It’s past time for us to start skating clean programs.”

Tatiana Novik and Mikhail Kuznetsov (MOS) opened their performance with an  original pair combination spin which earned them early applause for  the creativity from the audience. They  went on to perform all other  elements equally well, including side-by-side triple Salchows and a  throw triple Salchow, but only did a double twist. The 2009 Junior  Grand Prix Final participants were upbeat and entertaining in their  comic routine to The Marriage of Figaro, and received 56.86  (33.17/23.69) points for fifth place.

“Some things went well today,” commented Kuznetsov, “other things did not. We did the elements well, but we could have skated the program  better. The stroking was not as strong as it should be and the  presentation was lacking. We should have smiled more and had more  sparkle.”