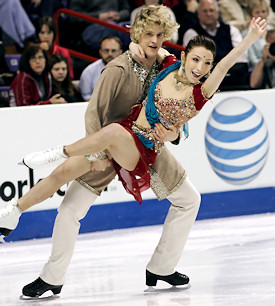 This week in Tallinn, Estonia, World Champions Oksana Domnina and Maxim Shabalin from Russia have found themselves in the middle of a controversy.  Though the duo was able to win the title in a very tight finish, the competition might be most remembered for their aboriginal original dance that has been called offensive by Australian Aboriginal groups.

In Spokane at the U.S. Championships, however, there was no such fuss.  All of the top teams performed beautifully, and each one represented a different type of folk dance with sensitivity, creativity, and athletic prowess.  The top four teams ran the gamut in terms of theme; there was Bollywood, a Moldavian folk dance, a country folk dance, and an Afro-Brazilian Capoeira.

The Technical Caller played an important role in the competition, judging each of the top eight teams to have equal difficulty in each of the five executed elements.  In fact, each team received  three level four elements, and all eight were logged a level three on both of the step sequences in their programs.

In the end, the Technical Caller handed the competition over to the judges, allowing them to be wholly responsible for the standings as they assigned grades of execution and component scores.

Reigning champions Meryl Davis and Charlie White extended their lead over the rest of the field, winning the original dance competition with their popular Bollywood dance, and now lead five-time U.S. Champions Tanith Belbin and Benjamin Agosto by 1.62 points.

“It felt like a really good performance today,” said Davis confidently. “Our elements weren’t the most solid that they have ever been today, nor were they as solid as they ever will be. There was a slight bobble on the twizzles, but overall, it was quite a good performance.”

White agreed.  “We really wanted to connect with the audience and the judges because that’s what so much of our Indian program is about.  It’s part of the draw, and I think that we really got that part down tonight.”

Davis and White knew almost nothing about Indian culture when they chose to skate to this piece, and left no stone unturned in order to pay respect to the culture in a positive manner.

“We went to a couple of specialists who really helped us understand what to do,” Davis said.  “We worked off ice in a woman’s studio for months, and she taught us what dance means in India and what it is all about.”

Davis continued, “We really didn’t know anything about Indian culture going in, and it was very important for us to do research so that we could do the theme justice.  We didn’t want to offend anyone or do something that was completely off base.  So we made sure that we talked to specialists who knew exactly what they were doing.”

The leaders have earned a total of 113.53 points in the competition before Saturday’s free dance, and show no signs of letting up in search of their second U.S. crown.

“It’s a slight confidence boost,” White said of his team’s lead into the free dance.  “We need to stay focused and perform one element at a time to make sure that it is perfect.  For us it is very important to go into the Olympics as the top team, and you garner a lot of respect (as U.S. Champions).  We are looking at this as a real competition as it is in no means a practice, and tomorrow we will be ready to go.”

Belbin and Agosto took on the task of skating a Moldavian folk dance, and the style suits this perky team well.  The program was catered to their light, upbeat approach to dance, and helped them to a total of 111.91 points at the end of the day.

“This is a dance that we love to perform,” Agosto admitted.  “It’s a lot of fun, and the audience here in Spokane… we couldn’t have asked for a better reception.  It was really wonderful, and we felt a lot of love and a lot of happiness.  It was just a thrill for us tonight.”

The World Silver medalists were able to research their rhythm choice online, and have received accolades from the Moldavian community for bringing their dance into the spotlight.

“We found researching our dance to be fairly accessible with performances on youtube,” Belbin shared.  “There are a lot of dance ensembles, many of which perform in Russia that do Moldovan dance styles.  We found a lot outlets and consistency among those dance performances that we could draw from to make sure that we’re very authentic to the character.  We’ve even had reporters from Moldova contact us and tell us that they are very excited that we are doing their dance.  I hope that we are doing it justice, and we feel very comfortable and confident that we are doing so.”

Moving up from fourth place to third are Emily Samuelson and Evan Bates, who skated the audience’s favorite number of the evening – a high energy country dance set to the music of The Dixie Chicks.

“The performance was definitely as good as it has been all year,” Bates said thoughtfully.  “A lot of the crowd and the outside viewers might not know what they are looking at in ice dance.  If they see a performance that they can get into, it makes all of the difference.”

Samuelson and Bates skated with command, perhaps the best unison of the competition, and reckless abandon that was rewarded with raucous applause by the packed arena.  Near the end of their program, the audience was full of laughter as Samuelson seemingly took a piggyback ride on her partner’s back.

“We were working on lifts off ice with our coach,” Samuelson explained with a giggle.  “And he picked me up over his shoulders and I ended up on his back in like a piggy back position.  We were just fooling around and he took my feet and swung me back, and everyone that we were training with laughed.  So we added it in.  It’s cool and fun, and it kind of fits the character of the program.”

The reigning silver medalists, who have earned 96.96 points before the free dance, drew laughter at the press conference when asked who they looked up to in ice dance as children.

“For me, I didn’t even start ice dancing until 2000,  and then I never really followed it until later.  So Tanith and Ben are definitely the first team that I idolized,” Samuelson admitted much to the embarrassment of a red-faced Belbin.  “They are amazing skaters, and they brought back the silver medals.  They definitely inspired me to keep training, and to work hard and try to make the Olympic Team some day.”

Kimberly Navarro and Brent Bommentre boldly skated an Afro-Brazilian Capoeira with the proper attack required of this ‘fight dance’.

“That was such a fun performance,” Bommentre admitted after he skated.  “There may have been one or two little stumbles in it, and we were just putting out so much energy and the crowd gave it back to us.  That could be the best original dance that we have ever skated.”

Navarro was also pleased with the performance.  “I was nervous, but we kept connecting, and that was our goal.  I’m laughing because there is like three choreographed vocals, and we did about twenty-five.  We were screaming just about every other step.”

Dressed in costumes that represent mythological figures from Afro-Brazilian culture, Navarro and Bommentre slipped from third place to fourth overall after the dance.  The team now has a total of 95.20 points heading into the final phase of competition, and has received good feedback from those in the Afro-Brazilian community near their training center.

“The woman who helped us with this piece has been bringing people into the rink to see the program,” Navarro explained.  “Everybody has been giving it the thumbs up.”

An interesting battle of the Madisons provides an interesting back-story to the Championships.  Madison Chock and Greg Zuerlein leap-frogged over Madison Hubbell and Keiffer Hubbell in the original dance to finish in fifth place at the end of the evening.  The Hubbells are in sixth place after finishing in fifth the night before.

Chock and Zuerlein skated a rousing Afro-Cuban folk dance on the way to scoring 88.99 points, while the Hubbells performed a peppy dance to music by Folk Song and Dance Ensemble Suzirya and earned 88.49 points.

The medalists and Olympic team will be determined on Saturday evening.