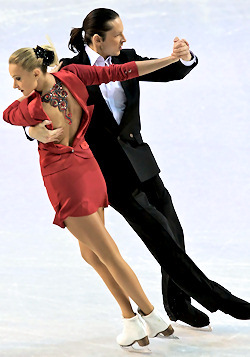 The 2010 European Figure Skating Championships are being held Jan. 19-24 Tallinn, Estonia at the Saku Suurhall.  It is  the first time in history that Estonia has hosted an ISU Championship. Approximately 177 skaters from 38 different   countries are competing for points and global prize monies totaling $350,000 in U.S.   dollars.

The event began today with the compulsory dance competition. Twenty six couples from eighteen countries performed “Tango Romantica” –  a dance adopted from the original set pattern dance by Alexander Gorshkov (the current head of ISU Ice Dance Technical Committee, who serves as the dance referee at the Championships) and his late partner Ludmila Pakhomova back in 1974.

The dance is comprised of two sequences split into six sections, and is considered to be one the hardest Senior compulsory dances.

Also in the mix are last year’s medalists Federica Faiella and  Massimo Scali (ITA) and Sinead Kerr and John Kerr (GBR), as well as Natalie Pechalat and Fabian Bourzat (France).

Despite relative lack of titles, the Italians and the French made a stronger impression during the Grand Prix series than Khokhlova and Novitski, who had a disastrous outing at the 2009 Skate America. Domnina and Shabalin missed the fall season altogether due to Shabalin’s ongoing trouble with his knees. In the end however, it was the Russians who prevailed.

Domnina and Shabalin delivered by the far the most precise dance of the competition. While their speed could have been better, their unison throughout all the steps and moves was unmatched. The skaters’ opinion of their performance, however, was rather reserved.

“We are very happy that the audience appreciated our performance,” said Domnina.  “We are satisfied with it, but not a 100 percent. Maybe 90 percent.”

Following the Russian National Championships in St. Petersburg at the end of December, the team returned to their training base in the USA. “Staying in Russia was out of question,” explained Domnina. “Our coaches have other students, even besides Belbin and Agosto, and they have to be prepared for competitions. Therefore them, and by extension us, had to be in the USA. We came back to Tallinn three days ago.”

Those three weeks proved to be productive. “We have improved a lot and not only in the compulsory dance,”  noted Domnina.

Domnina and Shabalin were the only team to received more than 20 points for both technical and program components scores, and currently lead the field by an impressive five-point margin with 42.78 points.

Khokhlova and Novitski edged the Italian couple for second place on the strength of their technical mark. The team, which missed their national championships due to injury, was sharp and showed excellent flow in the first sequence of the dance. However, they slowed down a bit for the second pattern, and there were occasional breaks in the unison of their free legs. They scored 37.87 (18.80/19.07) points.

The team was satisfied with the way they skated. “We came here with the mind set that we want to prove to everyone that we are still here, that you can’t count us out,” said Novitski.  ”

“We hope to repeat last year’s success, but we are not thinking too much about what was last year and what happened at the beginning of the season where we maybe didn’t get the results we wanted,” Khokhlova added. “This is a completely new step now and we are going into it with a clear head and refreshed mind. Today we were in an excellent mood and hopefully we were able to bring it across.”

Faiella and Scali, who were last to skate among the medal contenders, delivered a passionate and expressive tango, but Scali had a couple of minor stumbles in his footwork. The team received 37.47 (18.08/19.39) points.

“It is a good start for this competition,” said Scali.  “We are very close with the marks (between the top teams). There was a little stumble in a corner. I almost slipped.”

“We actually don’t have a goal for this season,” Faiella later told the press. “We just want to skate well here and to feel better on the ice and between the two of us. We are thinking about a medal because everybody is thinking about a medal, but the most important for us is to be at our best.”

Last year’s bronze medalists Kerr and Kerr had to overcome a shaky start to their performance when they nearly made a mistake during the opening steps, however, they recovered. Their performance was highlighted by very close positions between the partners, but the extreme proximity seemed to affect their level of comfort as they did not come across as relaxed and confident as the other teams. The students of Evgeni Platov scored 36.76 (18.16/18.60) points.

The Scottish couple did not seem to be affected by the pressure of being defending medalists. “It’s actually a nice feeling once you learn how to deal with it,” said Sinead.

Pechalat and Bourzat are virtually tied for fourth place with 36.36  (17.64/18.72) points. The team missed their national championships due to Bourzat’s ankle injury, but he claimed to be completely recovered from it.

“It does not hurt anymore,” Bourzat said of his ankle. “I had enough time to recover so it’s all good.”

The 2010 Grand Prix Final bronze medalists started off very strong, with excellent flow and deep edges, however,  Bourzat had a minor stumble in the corner during the second pattern.

Anna Cappellini and  Luca Lanotte of Italy are currently sixth with 35.93 points.  The team had the best combination of accuracy and expression, but lacked power in contrast to the higher  ranked teams.

“I feel our routine was strong,” said Lanotte. “It was intense and the interpretation of the dance was good. Usually we are softer with a slightly softer knee. In competitions, the accent of the moves is stronger because it is more dramatic.”

Israel’s Alexandra Zaretski and Roman Zaretski finished seventh in the first segment of the competition. Their dance was highlighted by excellent flow throughout both patterns, but appeared to be out of skaters’ control in places. They earned 34.63 points.

Ekaterina Bobrova and Dmitri Soloviev of Russia had an excellent European Championships debut as they placed eighth ahead of many more experienced teams. The skaters, who have teamed up ten years ago, displayed excellent unison and strong edges, earning 33.33 points.

“We were not affected by the debutants’ status,” noted Bobrova. “Why should we be? The thing is it’s the same dance whenever it’s a Russian Cup event or European Championships or…God willing…the Olympic Games.”

“It was not bad for the start,” stated Soloviev. “We beat our previous personal best and skated almost flawlessly. Well, some little things could have been better, more confident. We made some changes to the dance recently, hence the small mistakes. I hope they were less obvious for the judges than for us.”

Rounding out the top ten are the two  Ukrainian teams of  Anna Zadorozhniuk and Sergei Verbillo (32.60) and Alla Beknazarova and Vladimir Zuev (32.15) .