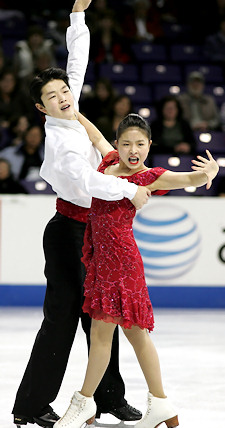 Maia and Alex Shibutani have a love affair with Spokane.  The newly crowned U.S. Junior Champions easily outdistanced the competition on Thursday to win their second title in Spokane.  Three years ago, Maia and Alex won the novice title in the same city.

“Spokane has been great for them,” said coach Igor Shpilband with a smile. “Maybe they can have the championships here in another three years so that they can win the senior title.”

The Shibutanis skated with the maturity of a senior team in their Tango Rhapsody program, and were rewarded with 88.80 points in the free dance.  Their total of 180.69 points was more than twenty points than the silver medalists.

“We’ve been skating well all year, and at the end of the day, you can only control how you skate,” Alex explained.  “We carried that success over to this competition, and we’re quite pleased to have done that.”

The gold medalists are looking forward to perhaps representing the United States at the World Junior Championships in March, but will have to wait until Saturday to learn if they have been selected.

“We have to just continue to work hard,” Maia said.  “It will be an honor to have the opportunity to compete again.”

Rachel Tibbetts and Collin Brubaker narrowly defeated Alexe Gilles and Zachary Donohue for the silver medals, earning their first medal of any color in the U.S. Championships.

“It’s a relief,” Brubaker said with a sigh.  “We wanted to come here and put together three consistent performances, and we knew going into the free dance that it was really tight.  We didn’t want to skate conservative, but we wanted to make sure that we took our time with each element.  It feels great to have a silver medal.”

Tibbetts and Brubaker skated an impassioned program to music by Andrea Bocelli that  earned them the third highest scores of the afternoon, but their lead heading into the free dance was enough to keep them in second place overall.  Their total of 160.61 points was just .40 more than Gilles and Donohue.

“It’s easy for us because the program allows us to take our time to express ourselves,” Tibbetts said of the couple’s connection to the music.  “We just draw from that and keep the choreography tight.”

Gilles and Donohue continued to make a charge up the standings after a disappointing fourth place finish in the compulsory dance on Tuesday.  The now two-time bronze medalists flirted with finishing with the silver medal, but made a mistake on their midline steps that probably kept them from moving up.

“I think that we attacked the beginning, but didn’t save enough for the end,” Gilles confessed.  “I think that we lost most of our points on the steps, and of course it has to be right at the end of the program when it is most remembered.”

Skating to music from the soundtrack North by Northwest, Gilles and Donohue finished with a total of 160.21 points for the competition.

Gilles eagerly awaits the naming of the World Junior Team, hoping that her luck will change this season after a series of disappointments in previous years.

“I’ve been an alternate three times,” Gilles explained of her status for the World Junior Team.  “Last year I was hoping that the third time would be the charm, but instead now I am hoping that the fourth time is the charm.”

Finishing in fourth place with the pewter medals were Isabella Cannuscio and Ian Lorello. The duo skated a fun program to music from The Pajama Game, and earned 151.88 points for their efforts.