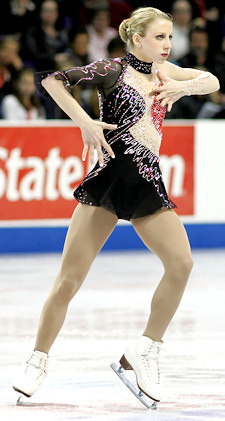 It’s been a long wait for Agnes Zawadzki (Broadmoor SC).  After finishing with the pewter medal a the 2008 U.S. Figure Skating Championships in St. Paul, Zawadzki moved up to the junior level showing great promise.

However, the 2009 Midwestern Sectional Championships, the fifteen-year-old Colorado Springs high school student failed to earn one of four berths to compete at last year’s championships.

“I think it was worth the wait,” the leader said of her return to U.S. Championships.  “I got much stronger and much more consistent.  Everything happens for a reason, and I guess this is my reward for waiting.”

Fast-forward to this season where Zawadzki has been winning just about everything in sight, including the Midwestern Sectionals that kept her home last season.  Here in Spokane, Zawadzki blew away the competition, earning 63.14 points for her short program – more than seven points than her closest competition.

“That felt awesome,” Zawadzki said with a wry smile.  “I just stuck to my training plan, so I had that going for me.  I just kept everything the same.”

Zawadzki opened with an easy triple Lutz-double toe loop combination earning the most points on a single element in the competition.  She then landed an adequate triple flip, and sealed the victory with a clean double Axel in her Piazzolla tango program.

“Repetition really helps with my consistency,” Zawadzki noted. “We do five (programs) in a row, three in a row, and ten in a row so that when we come to competition we know that we are ready and we can do it.”

Junior Grand Prix Finalist Kiri Baga (FSC of Bloomington) finished in second place with 55.51 points with her Dance Macabre program.  Baga, 14, does not demonstrate the same technical prowess as the leader, but her components are quite strong and keep her in the hunt for medals in most competitions.

“I felt strong, and I’m happy with how well everything came out overall,” Baga said after her skate.  ”

The 2009 Novice Ladies Champion opened with a flawed triple flip attempt, but was able to rebound to nail her triple Salchow-double toe loop combination.  Baga felt like her experience of competing on the Junior Grand Prix circuit this fall helped to prepare her for this competition.

“I learned a lot about myself by traveling around the world competing for the U.S.,” Baga said of her experience on the circuit.  “I wanted to skate well for everyone of course, and I had some expectations for myself that I believe that I lived up to. I didn’t really feel any pressure in trying to keep up with expectations from my earlier successes.”

“I made a goal this year to do a good short,” Wang said after having a poor short program on the novice level at last year’s U.S. Championships.  “I think I met that goal, so that makes me very happy.”

Wang, 13, skated to the Yellow River Concerto early in the draw, and didn’t mind waiting until the end of the competition to see how her score would hold up.

“The wait wasn’t bad because I knew I skated my best,” Wang said of the hour between her program and the end of the event.  “I couldn’t change what I did, so it wasn’t bad.”

Heading to the freeskate, Wang said that she is relaxed and believes that she is in a good position to have a chance to win a medal.

“I’m usually a free program skater,” Wang said.  “Since I’m so high in the standings, I think that my freeskate will help.  I just really like the freeskate.”

Thirteen-year-old Yasmin Siraj (SC of Boston) skated an emotionally charged program to music from Slumdog Millionaire, finishing in fourth place with a score of 50.72 points.   The Eastern Sectional Champion opened with a fall on the front end of a planned triple Lutz-double toe loop combination, but stayed in the hunt for a medal when she landed a nice triple flip jump.

Finishing in fifth place was Lindsay Davis (All Year FSC) in her first season as a junior lady with a score of 50.22 points.  Though Davis skated with lesser jump content than the leaders, her attention to detail to the components in her Edvin Marton program propelled her to skate in the final group in Friday’s freeskate.

Vanessa Lam (All Year FSC) finished in sixth place with 48.49 points after making two jumping errors, while seventeen year-old Kendall Wykoff (Vermont SC) overcame a crash into a fellow competitor in the warm-up to finish in seventh place with 46.00 points.

Earlier in the day, the novice dance medals were decided, and Alexandra Aldridge and Daniel Eaton (Detroit SC) pulled up from third place after the compulsory dances to win their first National Championship.

“We were hoping to go out there and do our best, and we did that,” fifteen-year-old Aldridge explained.  “This is a great start to a good partnership.  We can go on to the next level now, and hopefully compete together internationally next season.”

“It’s probably not our best, but at this time, in this competition, I feel like given the circumstances we did our best,” said the 17-year-old Eaton.  “We’ve never been in a competition where we weren’t in first, so to have the worries to catch up instead of being caught up to puts things into perspective in competition.”

The leaders after the compulsory dances, Danvi Pham and Vu Pham (Washington FSC), slipped to second place with a surprisingly mature performance by the eleven (Danvi) and twelve (Vu) year-old siblings.

“We’re kind of disappointed because our dance didn’t go as well as we had hoped,” Vu said after learning he won the silver medal.  “But we’re still happy because everything else went good.”

Danvi Pham was also somewhat disappointed because of some errors in the program.

“Our spin wasn’t good,” said the tiny dancer, “and we were too fast for our music.”

The pre-pubescent skaters were in a little bit of awe by the grandeur of competing at the National Championships, but took it all in stride.

“The arena is a little bit intimidating because the rink is so big,” Vu admitted.  “But it’s just like any other National Championships that we have been to, so it wasn’t scary.”

Danvi disagreed.  “It was a little bit scarier.”

Finishing with the bronze medals were Joylyn Yang and Jean Luc Baker (Seattle SC), moving up from seventh place in this competition last season.

Baker agreed, “Winning a medal means the world.  It’s another great stepping stone, and it means all the hard work paid off.”