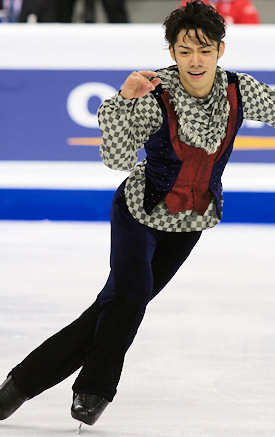 “I never planned to make history,” said a smiling Takahashi. “I just want to do my job and the  result comes with it. In a certain way I’m lucky. I’m very  proud of myself that I made history and I hope that I continue to be a legend.”

Although Takahashi’s  talent, powerful technique, and elegance on the ice made him a top candidate  for podiums all over the world, his success this past season wasn’t a given by  far. The 24-year-old had missed the entire pre-Olympic season due to injuring ligaments in his right knee in a fall during practice in October 2008. As a result, he was off the ice until April 2009.

One year ago, he was watching  Worlds on TV and was afraid that his dream of a medal at the Olympic Games  was over.

“Because of my injury,  I never would have thought that I would skate at Worlds again, let alone  win,” Takahashi said.

“It was very hard to come back after the injury, Takahashi recalled. “It was  difficult all the time, but especially before Nationals [in December 2009]. The time when I started skating again wasn’t so hard, but as soon as  I started practicing the jumps and until Nationals, it was very hard because  the jumps weren’t as they were before. I felt that my body had changed and that  I wasn’t able to control it as before, although in fact it hadn’t changed.”

In September 2009, a week prior to “Carnival On Ice,” the Japanese skater lost all his jumps. ” I was like empty. It was a scary moment. Up to  Nationals, it was a consistent battle to get back my feeling for the jumps.”

Takahashi admitted that he  thought about giving up while recovering from his injury, but he received a lot of  support from the people around him, and in the end he pushed himself. “I’m a  competitor,” he said. “I didn’t want to give up and I didn’t want to lose, so I brought  myself back.”

The inconsistency he  experienced last fall showed in the Grand Prix. Takahashi did well at Skate  Canada, where he finished second, but his performances at the NHK Trophy and  the Grand Prix Final were not convincing. But then he claimed  his fourth National title in December.

In Vancouver, Takahashi once again showed his  fighting spirit. The Japanese found himself in  third after a strong short program and close in  points to the leaders. He then   risked the quad toe in the free skate which cost him points and possibly a higher spot on the  podium. But Takahashi has no regrets. “For me, an ideal performance would need  to include the quad. Although I missed it [in Vancouver], it was a challenge  for me.”

At Worlds, he did it  again. Being in the lead, the Olympic bronze medalist attempted the quad  flip – a jump that no one has yet landed in competition. The jump was two-footed  and downgraded, but Takahashi was pleased that he went for it. “I’m not so keen  on doing only quads, but I could do two quads in one program before my injury,  and I just wanted to come back to the level that I had before my injury,” he  explained.

Previously, he had landed two quad toes at the 2008 Four Continents  Championships  where he scored a whooping 175.84 points. This is  still the highest free skating score that ever was achieved under the ISU  judging system, surpassing Evgeni Plushenko’s (RUS) current high of 167.67 from the 2006 Olympic Games.

Winning Worlds came a little unexpected for the Japanese skater who wasn’t even sure he would compete as he felt his season was over after the Olympic Games. “I wasn’t even motivated, so maybe that’s why I was relaxed and achieved this good result,” Takahashi revealed. “During my free skating, I didn’t think about anything, I felt somehow  empty, but I wanted to deliver a good program for all my fans. I didn’t think  about winning or losing, I just wanted to enjoy it. On the  podium, it was just incredible. I never thought that I would win, and I just  felt lucky,” he laughed. “It hadn’t sunk in yet, but by now I’ve realized it.”

Takahashi has been training  full-time with his long-time coach Utako Nagamitsu in Osaka since 2008. Before,  he also worked with Nikolai Morozov for a few years and split his time between  the USA and Japan. Kenji Miyamoto, a former Japanese ice dancer, choreographed  Takahashi’s expressive short program to Eye – a modern Tango by the Japanese  group Coba.

“I’ve wanted to skate to music by Coba since I was in high school.  My choreographer Kenji Miyamoto suggested music by Coba and brought exactly  this piece that I had in mind,” the skater recalled. Pasquale Camerlengo, a  former Italian ice dancer, created the playful La Strada program for the  long. It was not a surprise that Takahashi picked ice dancers to do his programs  as ice dance is his secret love. When he was younger, he looked up to Oksana  Grishuk and Evgeni Platov and Marina Anissina and Gwendal Peizerat.

Although the  collaboration with both Miyamoto and Camerlengo was very fruitful, Takahashi  hasn’t decided yet if he will work with them next season. “I really like to try  different styles of music and there is so much that I haven’t done yet. I want  to try something different next year, maybe also new choreographers,” he  explained. “I don’t have a clear plan yet, only that it should be something  new.”

The thing Takahashi  was looking forward to the most after Worlds was vacation. He wanted to go to  Hawaii, “because I’ve never been there,” but then his focus switched back to  his next big goal – the World Championships 2011 in Tokyo, Japan – his home country.

“I don’t know yet what will come after that, but if I’m then still not satisfied  with what I have achieved, I will continue and maybe suddenly Sochi is already  there,” Takahashi summed up.

At the same time, however, Takahashi feels the pressure of the next  generation. “The juniors are doing very well, including Yuzuru  Hanyu, who won the World Junior Championships. I myself feel that I can’t be  satisfied with where I am now, and I’m always threatened by these younger  skaters,” the World Champion admitted. Right now, he is still the one the next  generation of Japanese skaters looks up to and aspires to follow.