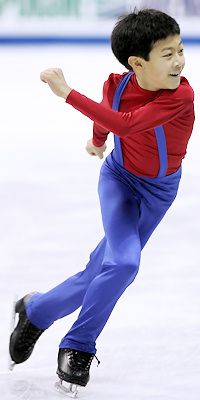 In sport, a young life can change at the drop of a hat.  A winning touchdown pass can propel a quarterback from obscurity into the mainstream. An unexpected Olympic gold medal can transform an also-ran into an overnight sensation.  We all love a good story of unexpected victory. USA’s Nathan Chen, an eleven year-old sixth grader from Salt Lake City, Utah, is one such story.

At the 2010 U.S. Figure Skating Championships, Chen qualified to skate in the novice men’s division – as a ten year-old.  Competing against skaters who were as much as eight years older than him, Chen snatched the national title with steady performances that showed glimpses of brilliance.

“I just tried to skate my best, and whatever happened, happened,” said the precocious Chen. “I was really happy and excited and felt pretty confident.”

At just four feet five inches tall, Chen drew incited adoring giggles of ‘Isn’t he cute’ from the stands, but soon proved that he was more than just a little boy skating to Peter and the Wolf.  Chen was a serious contender whose resume included the 2009 Intermediate Men’s silver medal and the 2008 Juvenile Boy’s bronze medal.

“I had been to the Junior Nationals before, but I didn’t really know what to expect,” Chen recalled. “Since winning, my life has changed because I am traveling a lot for skating.”

Since winning the title in Spokane, Wash., Chen has experienced more opportunity than most skaters achieve in their entire careers. To start, as a national champion Chen was invited to perform in the Exhibition of Champions, which brought him to the attention of David Liu, an artistic director of the skating show “Wi Wa”.

“At the Nationals exhibition, Kristi Yamaguchi and a lot of other skaters told him (David) ‘that was you when you were a lot younger’,” Chen explained. “He thought about that, and he decided to put me in the show that he was doing.”

While skating in China, Chen was noticed by an American national living in China named Ted Wilson. “Mr. Wilson invited me back to China to skate an exhibition at Skate Asia… to skate two numbers,” said the accomplished champion. “We will be there in August to skate the exhibition shortly after a competition in Southern California.”

Chen has also skated in shows in historic Sun Valley, Idaho, and was selected as the ABC News Person of the Week in mid February. “That was really fun and exciting,” Chen said of his award. “They came to my rink and taped me skating and interviewed me. I got a football that was signed by Diane Sawyer from ABC News.”

Like many skaters, Chen followed his older brothers Tony (17) and Colin (14) to the ice at the age of three. Both of the brothers were involved with hockey, but Chen’s mother Hetty thought it was important for Chen to learn how to skate before he jumped into the hockey rink. “I saw them play, and I really wanted to play, too,” Chen said about his hockey playing brothers. “My mom said that I needed to learn the basics first, so she put me on figure skates, and I really liked it. I really liked all of the spins and the jumping.”

Seven years later, that decision is already paying off for Chen, and his skating is only getting stronger as he grows and develops his skating repertoire. “I’ve been working really hard to get better as a skater since Nationals,” he admitted. “I have added two triple Lutzes and a triple flip, and I will do all of the triples except the loop and the Axel in my programs.”

In the new season, Chen’s support team have decided to remain on the novice level in order to naturally progress in his development. “We wanted to make sure that Nathan has the opportunity to develop as naturally as possible,” Chen’s mother Hetty explained about their reasoning behind him remaining on the novice level for the 2010-11 season. “At the junior level, the other boys are so much bigger and are quite a bit older than him. I don’t believe that he belongs on that level at his age at this time. It doesn’t really matter, though, what level he skates at because the goal is for him to continue to improve. Even though he is the novice champion, this is where we all feel he belongs at this time.”

Chen’s coach Genia Chernychova had a large part in the decision making process about what level he would skate this season as well. “We knew already before the National Championships that no matter what happened, Nathan would stay at this level,” explained Hetty. “(Chernyshova) is his coach, and she thinks that this level is good for him.”

Chen isn’t eligible for Junior Grand Prix events until the 2012-13 season, so the decision allows the champion the opportunity to grow outside of the glare of high stakes events. The novice champion has entered several non-qualifying club competitions this summer, and recently competed and won the Glacier Falls Summer Classic in Anaheim. His total score of 124.53 points was more than twelve points higher than the second place finisher in the event. Chen’s next event will be Skate San Francisco at the end of the month.

This season Chen has selected to skate to Rawhide for his short program, and personally selected Hungarian Rhapsody for his free skate. “My coach picked a cowboy themed program which is from the movie Rawhide,” Chen announced. “For my long program, I chose the music because I really liked it.”

And Chen’s taste in music could be described as refined, as the Utah native is also an award winning classical pianist and a competitive gymnast. “I have won local competitions in my age group,” said Chen of his piano skills. “I am also a Level 7 gymnast.”

In addition to continuing to work with Coach Chernychova, Chen is also working with Kent Weigle on strengthening his skating moves. “I have worked very hard to improve so much about my skating,”he offered. “We have been working on trying to improve the spins and add difficulty to them, and we are trying to get my footwork to level four.”

“I just hope to get all of my triple jumps this season, and make sure that everything is nice and neat,” Chen continued. “I will try to perform my best at every event.”

Chen attends Hawthorne Elementary School in Salt Lake City, and will be in the sixth grade in the fall. As a part of the Extended Learning Program, Chen takes classes one level above his grade level. Outside of the rink, gymnastics, and piano lessons, Chen doesn’t have much free time, but he dreams big both in terms of his skating and with regards to his skating afterlife.

“I really want to skate in the Junior and Senior Grand Prix events and compete in the 2018 Olympics,” he admitted. “After that, I would like to become involved in journalism or sports medicine.”

Other than his two brothers, Chen has two sisters – twenty year-old Alice is enrolled at Emory College and is a dancer. His nineteen year-old sister Janice is a student at Johns Hopkins University, and plays the violin and chess. Chen’s father Zhidong is a Research Scientist and his mother works as a Chinese interpreter.