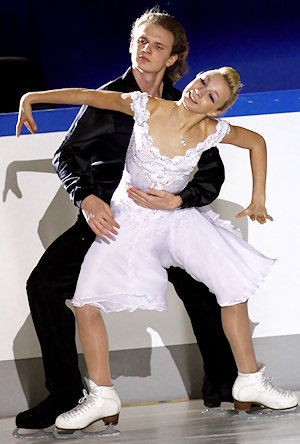 Sometimes when a partner is ‘dumped’, you might just end up with a better one. This is exactly what happened to Evgenia Kosigina and Nikolai Moroshkin. After both their previous partners left them, they teamed up and made a splash on the Junior circuit this season.

After just skating together for a few months, the young Russian ice dance couple placed third at the Junior Grand Prix in Courchevel, France, and then went on to win the event in Dresden, Germany – qualifying for the ISU Junior Grand Prix of Figure Skating Final.

It happened in a whirlwind, and 15-year-old Kosigina is still bewildered.

“I didn’t expect at all this to happen as we only teamed up recently,” she said, shaking her head.

The team led already after the short dance with almost five points over their teammates Marina Antipova and Artem Kudashev, and then went on to win the the free dance portion with a new season’s best score.

“We are always trying to progress,” Moroshkin commented. “We don’t train for nothing.

“I also think our performances were good,” added Kosigina. “We had a few small errors in the free dance, but in general it was good.”

In the free dance, there was a wobble on their combination lift which cost them a few points.

“Oh, we better don’t talk about that,” Moroshkin answered, laughing, when asked about what the problem was. “It was strange. At first the lift was difficult to learn, but then we did it really well, so I don’t know what went wrong this time. Probably the wind was blowing too strong,” he joked.

While the dancers can’t really explain their meteoric rise since starting to train together on June 14, coach Alexei Gorshkov has an answer.

“Basically both had experience already, not in the sense that they had big results, but they are both dancers,” the coach said. “He skated in Oleg’s (Sudakov’s) group also with quite a good girl, and she had experience. She competed at the Junior Grand Prix in Hungary last year. It just happened that they are a better match than they were with their previous partners. With both of them, you can do a lot of work and therefore they were able to gel in a short time. Their success wasn’t a question for me. The question was only if this will happen now or next year.”

Originally it was Kosigina’s idea to team up. Her partner Nikolai Mozgov left her shortly after Russian Junior Nationals in January.

“I skated alone for four months. When I heard that Kolia (Moroshkin) was dumped by his partner, I contacted him first, then my coach called his coach,” she said. “We just decided to give it a try.” She traveled with Gorshkov to Moroshkin’s home town of Togliatti in the south of Russia at the end of May for the try out. Ar first there were doubts.

“It was terrible. It felt uncomfortable, new,” Kosigina recalled, giggling. She didn’t think that it was ever going to work.

“We have different coaches and they taught us in a different way,” Moroshkin added. “Everything is different, everything, really.”

However, coach Gorshkov felt that it was worth it.

“We did the first practice, and they skated poorly,” Gorshkov recalled. “I said, ‘let’s repeat it three, four times’. They were very different, she has been with me for a long time, so she had her own ideology and he has his ideology, so this was difficult. So they repeated it and it was better. They did it for the third time and it was even better, and the fourth time was better again. We had two days. We tried it, and what they did one day, they did much better the next. We tried all elements and I said, ‘let’s go, there is no question.'”

So Moroshkin moved to Odintsovo. He lived in his partner’s home at first, and now rents a room in a students’ dormitory not far from the ice rink.

Kosigina is a native of Odintsovo and actually the first “home grown” top skater of this dance school that saw a lot of success in the ten years of its existence. However, all their top skaters – like Albena Denkova and Maxim Staviski, Natalia Romaniuta and Daniil Barantsev, or Oksana Domnina and Maxim Shabalin – originally came from other cities.

Kosigina started skating at age four to improve her health and then her fate was decided by her coaches.

“I didn’t decide anything,” said Kosigina. “They just took me into dance when I was eight years old. I skated like four years in singles and then Gorshkov’s wife decided to put together some young couples and they picked me. They didn’t even ask me. They said, ‘you go,'” she recalled with a smile. “I guess I was happy because I didn’t get anywhere in single skating. I always fell on all the jumps, nothing worked, but I enjoyed dance.”

Moroshkin started out skating to improve his health as a child.

“I was five,” the 16-year-old said, grinning. “And I skated and skated, and time passed quickly and now I’m already sitting here. The turning point for me came when I was 11 years old. Single skating didn’t work for me and I already didn’t like it anymore. At this time, (coach Oleg) Sudakov suggested to take me into dance. He was our dance coach, he suggested it and our secondary coach was putting together kids. I agreed and I skated in his group.”

While Kosigina named Oksana Domnina and Maxim Shabalin as her idols, Moroshkin claimed he had none.

Once the team got started with coach Gorshkov and choreographer Sergei Petukhov, they had to put together their programs quickly. Petukhov picked the Waltz with Russian lyrics for the short dance.

“He brought the music and that was it,” Moroshkin recalled.

But they searched a long time for the free dance music before choosing an orchestrated version of Frederic Chopin’s Waltz No. 7.

“I remember a practice where we tried all kind of things, and Sergei Georgievitch (Petukhov) switched on the music to the Fifth Element and said, ‘no, this doesn’t suit you, you look terrible with this music’,” Kosigina recalled, laughing.

Although they have two Waltzes, they wouldn’t say that the Waltz is their favorite rhythm.

“It just happened that way, and we selected two opposed Waltzes on purpose,” Moroshkin noted.

Right now, the skaters’ life revolves much around their sport. They are home schooled and prepare for the school exams with the help of tutors.

“Eating and sleeping” are their main off-ice activities, according to Moroshkin. “Yes, we live like little hamsters,” Kosigina agreed. She likes to go shopping with her sister and both enjoy watching movies on their days off.

Moroshkin describes Kosigina as “a great character! She is funny, good-natured and nasty, but very rarely. At practice she is very focused on the work.”

Kosigina describes her partner as “very funny, good-natured and obedient.”

Coach Gorshkov pointed out that they both have a strong character. “She (Kosigina) is this kind of person, if it was necessary not to eat for a week, she won’t eat, and if it was necessary not to sleep for a week, she won’t sleep. And he, too, is a good person. Kolia (Moroshkin) is very reliable. He’d rather hit his head before he’d let anything happen to her.”

The couple now plans on working on their technique to achieve higher levels and on polishing their programs before the Final. They don’t set any special goals for this season.

“Oh, we get new goals with the end of each competition!” Moroshkin exclaimed. “Actually we don’t have a goal this season. Our goal is just to do as many competitions as possible.”

They might compete at a national event before the Final, but they are also looking forward to some rest as they already did four competitions since end of August: the two Junior Grand Prix events and two national competitions.

Coach Gorshkov is already proud of them. “Now I think, thank God that her partner left, and thank God that Kolia’s partner left,” he said. “The most important thing is that these two people (Kosigina and Moroshkin) are interesting and are developing. I won’t look too far into the future as they are still very young. They are juniors, but they have all preconditions to become a good couple.”