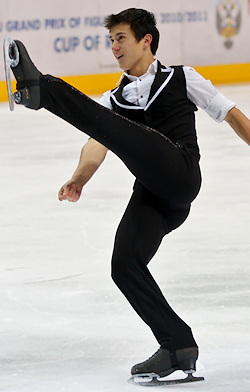 Patrick Chan of Canada performs to Take Five by Paul Desmond in the Men's Short Program.

Canada’s Patrick Chan captured a confident lead in the Men’s Short Program competition at the 2010 Cup of Russia. The 2010 World Championships silver medalist opened his entertaining routine to Take Five with an excellent quad toe loop – triple toe loop combination (the only 4+3 combination of the evening), which earned him an extra 1.86 points for the quality of execution, including a perfect +3 from one of the judges.

For the student of Lori Nichol, who has as recently as last season dismissed quad jumps as not “required for winning,” it has been his first ever quad combination performed at an ISU event. However, one would have never guessed it from his calm and confident approach to the element and the quality of both jumps.

“Together with my coach we have set a goal during the off-season to include a quad into program this year,” commented Chan. “As my confidence grew we decided to include into the short program as well. I think the post-Olympic year is the best possible time to work on such elements – there is nothing too loose. I am, however, very much pleased that I have landed it here in Russia, the country in which both the skaters and the audience traditionally appreciate quads.”

Chan, however, admitted that he was nervous coming into the short program in Russia.

“I did not have a good short at Skate Canada, so naturally I wanted to do a clean one here,” said the skater. “I was so happy that I completed a clean quad combination, which was a bit of weight on my shoulders, but I guess I was too carried away with excitement,” he added about a fall on the following triple Axel attempt.

Despite the fall, Chan produced an otherwise clean routine and his program was one of the highlights of the day thanks to the sophisticated choreography, his strong skating skills and great character. He was the only skater to break the 80-point barrier (81.96).

The Canadian’s light-hearted program shined especially well on a backdrop of a far more somber performance by Jeremy Abbott, who skated right before him. The U.S. Champion set a strong pensive mood right from the opening chords of his Viejos Aires routine and the program, choreographed by famous Spanish choreographer Antonio Najarro, was packed with complex transitions and characteristic moves, which did not allow a skater any time to recover from possible mistakes.

Fortunately, this time the student of Yuko Sato did not make any. Abbott nailed all his elements, including a triple Axel and earned 77.61 points. Like Chan, he also admitted being nervous “more so than at my first Grand Prix event in Japan,” albeit for a slightly different reason.

“The last time I skated at Cup of Russia [back in 2008] my short program was simply horrible,” said Abbott, “so I just wanted to do a clean one this time around. Besides I feel more pressure now that I have a chance to qualify for the Grand Prix Final. I just wanted to stay calm the best I could. I got all my elements completed and I am very happy about that. I guess I did not have as much fun skating in front of the audience as I usually do, but I got the job done. Now I am looking forward to tomorrow.”

The skater who has specifically requested to be assigned to Cup of Russia said that “it is a great pleasure to skate in front of the Russian audience, which is very knowledgeable about figure skating, and to perform in the country with such an excellent tradition in the sport”. He did, however, admit having more practical reasons for the request: “In addition, with the pacing of my season, it is very good for me to do to this event.”

Coming off a disastrous Olympic season, Tomas Verner of the Czech Republic finished third with 74.10 points with an “almost-clean” short program to music from Singing in the Rain. While the former European Champion have not yet fully recovered either his sparkle, which used to set him apart form the rest of the field, or his full technical proficiency, a decision to relocate to Canada and work with Robert Emerson seems to be the step in the right direction. The landing of his triple Axel could have been more secure and he received an edge call on his triple flip, but otherwise he was clean and got high levels on most of his elements.

“I am afraid I do not have much to say about my short program,” Verner told the press. “I am quite satisfied as I skated an almost clean program. It is very early in my season, I have only started training [with a new coach] about five weeks ago. Still it is a good position to be in after the short and I will have much more to say tomorrow.”

When challenged about a lack of quad, an element he used to call his favorite one in the past, the Czech was quick to assure the media representatives that it is only a temporary set back.

“I still do love my quads,” sated Verner. “I work on them in practices. However, I have only been working in Canada for five weeks, so I have not yet adjusted to a different training regiment. I was not quite as secure as to put a quad into a competitive program. But I am definitely going to do it at the European and World Championships, don’t worry.”

Sitting in fourth after the short program is Russia’s Artur Gachinski (72.41). For the student of Alexei Mishin, it is only the second Grand Prix event of his career and a definite improvement on his Skate Canada’s debut from a few weeks back. He landed a nice quad toe loop – double toe loop combination as well as a triple Axel and triple loop out of steps.

Teammate Konstantin Menshov, a Grand Prix debutant at the age of 27, attempted the same content, but doubled the loop and is currently seventh with 67.34 points.

French skater Alban Preaubert entertained the audience with his performance to Turtle Shoes placed fifth, while the 2010 World Junior Champion Yuzuru Hanyu from Japan finished sixth. Both skaters were essentially clean even though the Japanese got an edge call on his flip.