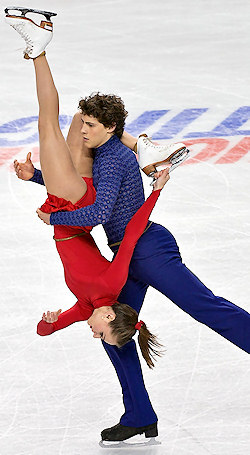 In the world of ice dance, European teams have dominated the international scene since the inclusion of ice dance in the World Championships in 1952. It took more than fifty years for a non-European team to crack the top of the world podium, and it has only happened twice in all.

Since the new judging system has been introduced at the World Championships in 2005, however, North American teams are beginning to show some dominance of their own, winning ten of the eighteen medals awarded at code of points-judged World Championships.

In 2003, Canadians Shae-Lynn Bourne and Victor Kraatz finally stood atop the podium at the World Championships after ten seasons of trying. Looking back on their milestone win, it might be said that this was the turning point in the European domination of the sport of ice dance.

American and Canadian teams routinely win medals at all international events these days, and are building a legacy of champions in their own right. One of the teams who has the talent and ambition to become a dominant force is Canada’s Vanessa Crone and Paul Poirier, the current Canadian silver medalists.

Crone and Poirier have skated together since 2001 when they were eleven and ten years-old respectively. Both skaters have competed in singles- Crone finished in 13th place on the Junior level at the 2008 Canadian Championships, while Poirier won the silver medal at the same competition as a Junior man. But ice dance is where their competitive hearts lie, and now Crone, 20, and Poirier, 19, are proving to be one of the most promising teams on the international circuit.

In the 2007-08 season, Crone and Poirier began to emerge as a rising young team in the Junior Grand Prix circuit. After winning two events, the Ontario-trained duo headed to the Final for the first time and finished in fourth place. After a fourth place finish at the Canadian Championships in their senior debut, Crone and Poirier earned the silver medal at the Junior World Championships in Sofia, Bulgaria.

The following season saw the duo leap to the senior Grand Prix, and they shockingly won the silver medal at their first event-Skate Canada in the fall of 2008. Crone and Poirier leaped up to win the silver medal at the Canadian Championships later that season, and punched their tickets for their first World Championships where they finished in a respectable twelfth place.

Last season with the Olympics on the line, Crone and Poirier experienced their best season yet- placing third and fourth at the Grand Prix events, earning a place in the Final for the first time after two teams withdrew from the competition. With a sixth place finish at the Final, Crone and Poirier were somewhat weary about their chances of earning one of the two spots that Canada had earned for the Olympic Games. The duo finished in second place behind eventual Olympic Champions Tessa Virtue and Scott Moir, and just .30 points ahead of bronze medalists Kaitlyn Weaver and Andrew Poje.

“I think a lot of people have a big emotional crash after the Olympics because you invest so much into the Games, and once you get home, your body tells you that it needs to rest for a while,” Poirier remembered. “As for Vanessa and I, I think the opposite happened. Because we were so uncertain about qualifying, for us, Canadians was a huge emotional investment and we found it hard in those few weeks between Canadians and the Olympics to train strong.”

After a fourteenth place finish at the Vancouver Games, Crone and Poirier headed to the World Championships with renewed spirit and catapulted up the ranks to finished in a career-best seventh place.

“The Games were a huge eye-opening experience for us and our slightly disappointing skates and results there made us hungry to prove ourselves at the next competition,” Poirier explained. “Getting home from the Olympics, we were ready to train.”

Crone agreed. “After our showing at the Olympic Games we were pretty disappointed in ourselves and our skating. We knew that our performances at Olympics were not at their best, and we never wanted to feel so disappointed like that ever again. We got home and worked extremely hard and had a goal and made it happen. We felt that we had a lot to improve on and we definitely made a huge impact on our career when it came time to making it to Worlds.”

In the off-season, Crone and Poirier returned to their home base- the Ice Dance Elite at the Scarborough Figure Skating Club in Scarborough, Ontario, and immediately started to prepare for the new season with coaches Carol Lane and Juris Razgulajevs.

“Carol was a British Ice dancer and competed internationally. Being part of the third team behind Torvill and Dean, she unfortunately was only alternate for the Worlds and Olympics,” Poirier said of his head coach. “Juris competed for Uzbekistan and Japan, and was in the Lillehammer Olympics.”

“Our coaching staff are absolutely amazing and we are so fortunate to have them paving our career for us,” Crone said emphatically. “They are very special to us and we couldn’t imagine going through our skating career with anyone else.”

This season, Crone and Poirier have also worked with legendary ice dancer Christopher Dean on choreography for their free dance, a modern version of Eleanor Rigby by The Beatles.

“I think we wanted to take a more lyrical approach to our skating,” Crone said of their decision to hire Dean this season. “It’s just to get a different feel and get ourselves into more of a creative mode, and push ourselves in a different way instead of listening to the music and doing what it tells you.”

“We had a very hard time choosing our music this season. Music choice is always so important, and we wanted to make sure to make the right decision heading into this very important post-Olympic season,” Poirier admitted. “As a team, we try to reinvent ourselves every year, and we also had the restriction of the music needing an audible rhythm and being uplifting. When we had found the Eleanor Rigby piece, we knew immediately that we wanted to skate to it. It had a combination of all sorts of emotions, and we believed it would take our skating in a new direction.”

Their short dance to Alicia Key’s Fallin’ was just as difficult to choose, Poirier confessed, but it fit the bill of what the team hoped to accomplish with the short dance.

“We played with a lot of choices, and decided that sticking to one rhythm would be the best thing for us, considering the Short Dance would be tricky enough being brand new. We finally turned to Fallin’ because it’s a more modern piece, slightly bluesy, and we wanted to try something different from the traditional waltz.

The duo took great care in packaging themselves this season, with Crone presenting a more mature physical look on the ice, and the duo taking a big risk with costuming.

“I think this season we wanted to just be simple and show natural beauty,” Crone said of her new grown-up look. “I have in the past over done make up or had a more childish look, but I really want to be sophisticated and polished. Its something that was a personal decision and I just found the right people to help me along the way.”

Poirier added, “I think we definitely wanted to make a bold statement with our free dance costumes designed by Marijane Stong. This was something that we knew would be risky, and that some would like and some would not. The impact of the costumes is the bright and vibrant colors with a very simple and uncluttered design. We wanted the focus to be on the beautiful lines that [Dean] has created.”

The Canadian silver medalists made their season debut at Skate Canada in Kingston, Ontario, taking away the first Grand Prix title of their young careers over the much more experienced team of Sinead Kerr and John Kerr of Great Britain.

“To be able to perform in front of a home crowd is always an amazing experience, and we felt them support us through the whole competition,” Poirier recalled of their win in Canada. “It was definitely an exciting prospect to finally stand atop the podium for the first time at a Grand Prix, and it was nice to see our flag raised, hear our national anthem, and have the entire stadium sing with us. It was definitely a perfect start to the season.”

Just a few weeks later, Crone and Poirier headed to Portland, Ore., to face off against Olympic silver medalists Meryl Davis and Charlie White and also teammates Weaver and Poje. Crone arrived in Portland with a nagging shoulder injury that forced the duo to curtail their preparations for the competition.

“I hurt my shoulder last week, and the day that I injured it we didn’t train,” explained Crone after their second-place short dance. “After that we just altered the way that we train some things, and we just put it out of our minds otherwise. It’s the tendon in my left biceps. It’s not completely healed, so it’s a bit nagging, but I try to block it out and that has worked for me.”

Despite the injury and a random fall by Poirier in the free dance, Crone and Poirier clinched the silver medal behind Davis and White, and qualified outright for next month’s Final in Beijing.

“This year we really wanted to prove to ourselves that we were ready to be part of the top senior ranks,” Poirier said proudly. “I think that qualifying for the final is definitely the first step towards achieving that. I think that qualifying this year is proof of our hard work over the off-season and I think we’re both very satisfied with and proud of our results in both of our Grand Prix. There is definitely a lot of work to be done between now and the Final if we want to be on the podium, but I believe we’re up to the challenge.”

Though the Final is just weeks away, Crone and Poirier are also mindful of the upcoming Canadian Championships in which they could earn their first National Championship with Olympic Champions Virtue and Moir currently sitting on the sidelines as Virtue recovers from surgery.

“I’m not sure if anything has changed in our minds,” Poirier said of his team’s approach to the Canadian Championships. “Regardless of our Canadian standing we are looking to make big leaps this year and to put in the work necessary to do so. We try to focus on our skating and not the placements. I think our programs this year, in being more difficult than our previous ones, need a bit more mileage before we are completely comfortable. So I think at this point, there is still a bit of thought about the technical processes of the program. We hope by Nationals and the ISU Championships to have fully mastered our programs and at that point to perform them at our full potential. That is definitely the next step in our skating.”

In the end, however, Crone admitted that the team has one big goal left to accomplish this season. “Our main goals for this season were to make the Grand Prix Final, which we have done, and to also be in the last warm up group for the free dance at worlds.”