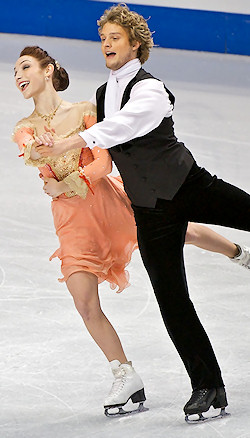 USA's Meryl Davis and Charlie White placed first in the Short Dance at Skate America with a Waltz.

Olympic silver medalists Meryl Davis and Charlie White took the lead after the short dance last night in Portland, Ore., as expected over a pair of Canadian teams who are on the international rise.

The lead was less than what was expected, though, as White made an uncharacteristic mistake on one of the required elements in the program. Their score of 63.62 points was far less than their personal best, but they take a comfortable three-point lead into the deciding free dance.

White stepped out of and put a hand down on the twizzle sequence, costing the team about three points, but their component scores carried them to victory in this phase of the competition.

“Charlie and I are really pleased with our short dance, and we think that it is much improved since NHK,” Davis said. “We’re really excited about the direction it is taking, and with the exception of a couple of little fluky things here and there, there’s nothing to be concerned about at this point.”

White continued, “Physics kind of got in the way today in the twizzles for me, but these things happen, and we just move on from here.”

Davis and White ditched an early season program to the music from the soundtrack Amélie before deciding on more traditional waltz music by Puccini.

“Originally we were going to skate to Amélie and make an interesting story line with an invisible typewriter and all sorts of crazy things,” White said with his usual flair. “But there wasn’t really enough time in the program to get that creative. We kind of learned that the hard way, so we decided to go in a more classical route to music that people are really familiar with. We thought we could bring a certain ‘Meryl and Charlie’ style to it, and it’s a very simple story line of us at a party. We wanted to just portray those characters but keep it simple and let our skating speak for itself.”

Canadian silver medalists Vanessa Crone and Paul Poirier nearly caught Davis and White, and did outscore the American Champions on the technical mark. Their score of 60.41 points was good enough to edge out teammates Kaitlyn Weaver and Andrew Poje who earned 59.48 points.

“I don’t think it was a perfect performance,” Poirier admitted. “I think there were a couple of shaky spots, but we just tried to cover them up. We’re still really happy with the performance.”

Crone and Poirier skated to Alicia Keys’ Falling, a more sophisticated look for the young team than programs past. Though they scored better at Skate Canada just two weeks ago, the duo was pleased with the performance nevertheless.

“I think that we kind of just went with the flow. We had a big high when we finished first in Canada, but I think that we came back down to earth when we went back to training,” Crone confessed. “We came to this competition not thinking about results because it is easy to lose momentum if you let results get into your head. We had our own little goals, and we just focused on those.”

After winning the first Grand Prix title of their career in Ontario, Crone experienced some pain in her shoulder, putting their participation here in Portland in doubt. However, the team decided to put that injury aside to try to qualify for a second consecutive trip to the Grand Prix Final.

“I hurt my shoulder last week, and the day that I injured it we didn’t train,” explained Crone. “After that we just altered the way that we train some things, and we just put it out of our minds otherwise. It’s the tendon in my left biceps. It’s not completely healed, so it’s a bit nagging, but I try to block it out and that has worked for me.”

Weaver and Poje, Canadian bronze medalists, are coming off a silver medal winning performance at the NHK Trophy earlier this season, and are in great position to equal that here.

“We have great mentors around us who are helping us to improve each time we compete, and we definitely are like sponges in what we can take from them,” Poje admitted. “We have a goal in our head, and that’s what keeps us going.”

Skating to a waltz and quickstep, Weaver and Poje took a more traditional route to the theme of the short dance. Their score of 59.48 is a new personal best, but the duo still sees room for improvement as the season progresses.

“We do the second side of the compulsory portion of the Golden Waltz first because it requires more speed and more energy,” Weaver pointed out. “We are definitely capable of getting level four on that side, but I felt a little tentative on my cascade, and I think we lost a level there.”

“This year our approach is that we have nothing to lose, and we’ve worked really hard all summer,” Maia explained. “We thought that we were ready to make the jump to the Grand Prix, and we’re just trying to do our best at each competition and it’s been really nice to see good results.”

Though the performance was a crowd favorite, the Shibutanis admit that the Golden Waltz has been a challenging puzzle to solve in their first season as senior skaters.

“The Golden Waltz is much more difficult than many of the other compulsories that we have done before,” Alex said. “But we like the dance a lot, and we’re going to keep building on each performance as the season progresses.”

Rounding out the top six are Russia’s Ekaterina Riazanova and Ilia Tkachenko with 55.52 points, while a third American team, Lynn Kriengkrairut and Logan Guilietti-Schmitt returned to the Grand Prix after a three year hiatus to finish in sixth place with 52.13 points.