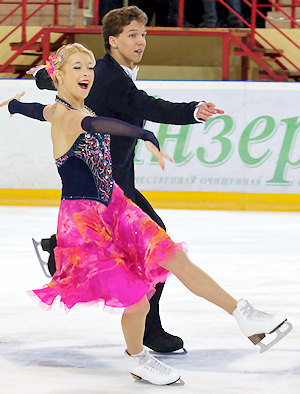 Ekaterina Bobrova and Dmitri Soloviev are currently first after the Short Dance at the 2011 Russian Figure Skating Championships.

The 2011 Russian National Championships began today in Saransk, the capital of Republic of Mordovia, some 650 km east of Moscow. The town, which has no strong skating traditions, managed to attract a sizable and very enthusiastic crowd for a colorful opening of the Championships.

The small venue, which was filled almost to capacity, saw the Championships off to a very touching start. All renowned coaches in attendance at the opening ceremony were asked to join officials at the podium and receive their share of ovations.

The ice dancing couples upheld the festive mood with strong and inspired performances with remarkably few mistakes. As expected, the trio of medalists from the Grand Prix events are in tight competition for the title. Ekaterina Bobrova and Dmitri Soloviev currently have a 3-point advantage over Elena Ilinykh/Nikita Katsalapov and Ekaterina Riazanova/Ilia Tkachenko who are virtually tied for second place.

After the poor showings in the Grand Prix Final (GPF) a few weeks ago, Bobrova and Soloviev concentrated their efforts on reworking their elements – mostly twizzles at which Soloviev made mistakes in Beijing, and it paid off well. Their performance to Delilah was sharp and commanding from start to finish and was an easy favorite with the crowd. The opening twizzle sequence was a bit shaky, however, Soloviev managed to keep his balance well enough to avoid making major mistakes and the sequence was only downgraded to level three. They picked up 64.34 (32,72/32.62) points for the dance.

The team, however, was dissatisfied with their performance.

“No, it was not perfect,” said Soloviev, “but we always try to be hard on ourselves. Even a small mistake on twizzle or side by side steps, which can be easily overlooked, still affect the results. It was not perfect, but I guess we are happy overall. We put up a fight and overcame some mistakes we have done earlier.”

“Unfortunately, we had very little time to prepare for the championships,” explained Soloviev. “After the Grand Prix Final, we took a couple of days off to recover and then started to work on everything again including twizzles. We have changed them.”

Now the team plans to take it easy for the day they have between the short and the free dances.

“It is not unusual for us to have a day off,” said Bobrova. “Normally we had one between compulsory and original dance, so we will take a good rest and maybe do some sightseeing.”

Ilinykh and Katsalapov also improved a lot compared to the disastrous outing they had in Moscow. The 2010 World Junior Champions chose a somber and sinister Agony waltz by Alfred Schnitke for their program and thus faced a more serious challenge engaging the audience in their performance. However, they proved to be up to the task and it achieved the goal easily enough with the help of their excellent basic skating skills, charisma and expression. By the time their music switched to a passionate Argentine tango, the spectators were firmly behind them applauding each move they executed. The abandon the skaters displayed certainly deserved this response. Technically, their only problem was a level two for the second sequence of Golden Waltz.

“After Cup of Russia we mostly worked on our stamina,” said Katsalapov. “Unfortunately our time has been cut a bit short because Lena had some problems with her leg, so for a whole week I basically trained alone. We are very happy with our performance today. It was as good as it could have possibly been. There were quite a few minor issues, but we will work on it.”

“However, the credit to the way we skated tonight does not really go to stamina training,” added Ilinykh. “It was pure adrenaline. The reception here and the support of the crowd were phenomenal. The support of our coaching team also helped us a lot.”

“We will rest,” said Katsalapov about their game plan. “Then we count on having a strong practice and then we will have some more downtime. Maybe see the town too.”

Riazanova and Tkachenko were also clean, however, their midline step sequence was called a level two. The team, which set their dance to the famous waltz from Snowstorm by Grigory Sviridov, has received a lot of praise from fans and specialists alike for their excellent interpretation of the dance, and that praise was well deserved. Keeping true to a combination of subtlety and power of the music, the students of Alexei Gorshkov created the program in which none of the elements stood out, but enhanced the overall impression and maintained stately character throughout. They earned 62.17 (31.14/31/03) points, which promises a very exciting closure to the competition on Tuesday.

“We are very happy with the way we skated,” said Tkachenko. “Today is my birthday, so I know how I would have liked to spend the rest of the day,” he joked. “But I can assure you that we will keep the regiment and prepare well for the free dance.”

Kristina Gorshkova and Vitali Butikov put out a technically clean performance to Russian Waltz by Alexandra Pakhmutova, however, one sequence of the Golden Waltz and the midline step sequence was called a level two. Despite their strong basic skating skills and good flow, their dance lacked the impact compared to the higher placed couples. The students of Elena Tchaikovskaya earned 57.30 (29.01/28.29) points to finish a distant fourth.

Jana Khokhlova and Fedor Andreev also evoked the atmosphere of XIX century Russia in their dance to music from the War and Peace soundtrack, but the couple took themselves out of contest for top place when Andreev stepped out of the first twizzle in sequence. Even though the element was still called a level three, they lost too many points on it as well as the final rotational life which received only a level two. They did, however, manage to receive a level four for one of the sequences of the Golden Waltz, and in general, the compulsory part was the highlight of the entire program. Despite only scoring 53.74 (26.22/27.52), the students of Marina Zueva did not appear discouraged by the score.

“We do not really pay attention to the scores at this point of time,” explained Khokhlova. “What is important for us is the feedback from the judges and audience. And it is mostly positive. We have achieved a lot in just six months and we are proud to show it, but we know that we have even more work ahead of us. But we are very pleased to hear words of support from the officials.”

Angelina Telegina and Valentin Molotov, the lone representative of Mordovia in the Championships (the couple, however, trains in Odintsovo near Moscow), finished sixth with a shaky performance to a waltz from Amélie. The students of Alexei Gorshkov displayed nice character and good basics, however, they were too nervous in their Senior Championships debut and had a few mistakes and stumbles here and there. They scored 47.06 (23.64/23.42) after receiving low levels on both sequences of the Golden Waltz, as well as a side by side step sequence.