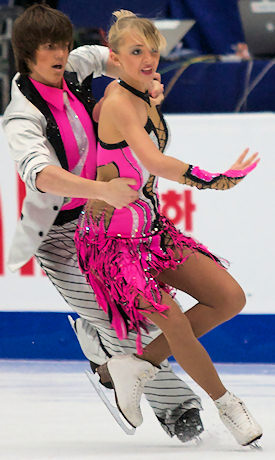 Alexandra Stepanova and Ivan Bukin of Russia posted the second highest technical score for their sultry and exciting performance to music from the Pink Panther soundtrack at the 2010-11 Junior Grand Prix Final of Figure Skating.

This season, Alexandra Stepanova and Ivan Bukin established themselves among the top junior teams right away. They won their two Junior Grand Prix events in Courchevel, France and in Karuizawa, Japan in their first year on the circuit, and went on to earn the bronze medal in the ISU Junior Grand Prix of Figure Skating Final with two strong performances.

The team picked up a level four for all elements but the step sequences (level three) in the free dance. In the short dance, the Russians had a level four for the first sequence of the Viennese Waltz, for the twizzles, and the lift.

“This result makes us very happy,” said Stepanova. “We were a little nervous after [the short dance] as we hoped to remain in third place.”

Bukin? This name sounds familiar. And indeed, Ivan Bukin is the son of Andrei Bukin, who won the ice dance gold at the 1988 Olympic Winter Games, competing with Natalia Bestemianova. Bestemianova and Bukin are one of the most successful ice dancers in history. In addition to their 1988 Olympic Gold, they also took Olympic silver in 1984 as well as four World titles and five European titles.

At ages 15 and 17, Stepanova and Bukin belong to the next generation of Russian dancers. They were teamed up by their coaches Irina Zhuk and Alexander Svinin four years ago in Moscow.

“Sasha (Alexandra) is from St. Petersburg and was a single skater there, but even when she was a child, you could see that she is a talented dancer,” said Zhuk. “The jumps didn’t work for her because of her long legs, so that meant the direct way into dance. Vania (Ivan) was also a single skater and it was obvious that he is a dancer. After all, the genes are there!”

Bukin skated with Elena Ilinykh before teaming up with Stepanova. She didn’t have other partners.
“They are a really good match, physically and also considering their characters,” continued Zhuk.

Both athletes have positive memories of their try-out.

“I liked skating with Sasha right away. She was a good single skater and it was easy to skate with her,” noted Bukin. “I was really shy, but Vania talked to me first. I enjoyed to skate with him and I hoped that it would work out,” Stepanova explained.

Stepanova first got into skating as a five-year-old when her mother took her to the rink.

“I come from an athletic family,” she pointed out. “My mom played volleyball and my dad was a speed skater.”

To follow a career in ice dance, they moved to Moscow as there was no dance school in St. Petersburg. Bukin of course grew up in a skating family, as not only his father but also his mother are skaters. However, it wasn’t self-evident that he took up the sport.

“Actually my dad didn’t want that I start skating,” revealed Bukin. “It was my grandmother who took me to the ice rink. My mom wanted me to do singles, but when they asked me to do dance, I agreed. To be honest, I wasn’t a good jumper,” he added.

His brother Andrei, who is ten years older, is not an athlete. He studied marketing. Bukin is a student at the Institute of Physical Culture since 2010.

“I try to do my best at university, but it will be hard with our schedule,” he admitted.

Stepanova’s favorite off-ice activity is photography while Bukin enjoys music and watching movies. The skaters describe their relationship as “very friendly” and occasionally spend their spare time together.

Stepanova and Bukin have progressed a great deal since the past season, and thus had a very successful debut on the junior circuit.

“Our leading couples Khokhlova and Novitski and Rubleva and Shefer retired and so we fully committed ourselves to working with the new generation,” explained coach Svinin. “Vania and Sasha’s big advantage is that they are hard-working and goal-oriented. Plus we have a strong team, with the coaches, the choreographer, the coaches for off-ice training, ballroom dance, acrobatics and a psychologist,” he continued.

Bukin felt that success came as he and his partner are understanding each other better now on the ice and worked a lot.

“We have interesting programs and I enjoy performing them,” said Stepanova. “Additionally, we now have serious goals and we try to fulfill them.”

The goals are, indeed, ambitious.

“I want to learn to skate well and of course I want to win the Olympic Games,” Bukin said.

Not surprisingly, his father is his idol in the sport, and he also looks up to his father’s partner Natalia Bestemianova, to his mother Elena Vasiukova and to Igor Bobrin, in whose ice theater his parents are performing to these days.

“I watched the performances of my dad with Natasha (Natalia Bestemianova), and they skated beautifully and with a lot of speed,” he offered. “Of course I also look up to our coaches Irina Zhuk and Alexander Svinin, they are true professionals,” he added.

“Their skating is strong and beautiful,” she underlined.

Bukin seems to deal easily with the expectations and the pressure that come with carrying such a famous name in skating.

“I’m very proud of my dad, and I want to become an Olympic Champion myself. I will try my best,” he said.

“Obviously Vania has a lot of responsibility as he is the son of an Olympic Champion,” Zhuk agreed. “But he deals well with that because he has an easy-going, cheerful personality. The older Bukin shares his experience with his son and supports him in every aspect.”

The coaches describe Stepanova as “goal-oriented and fearless” and Bukin as “strong, masculine, sunny”.

“It is easy to work with this couple. They are manageable and they trust us. They are not afraid of taking risks and they have a very good relationship,” Zhuk said.

For the coaches, the couple’s strengths are their speed, soft gliding, deep edges, fearlessness and looks. Their main weakness is, so far, the presentation.

“But this will come with the competitions and with the years,” Zhuk pointed out.

For this season, the coaches found a good vehicle for the couple by choosing a Waltz by Franz Liszt and a Tango for the short dance, as well as Pink Panther for the free dance.

“We always look for music that fit the abilities of the couple,” explained Svinin. “Vania and Sasha are a beautiful dance team. And when we heard Pink Panther in a jazz version, we decided right away that this would be the right music for the kids. They liked it immediately,” he continued.

By winning their two events and medaling at the Junior Final in their first year on the circuit, Stepanova and Bukin have already left a strong impression and have a chance to qualify for the Russian team for Junior Worlds. This will be tough as Russian Junior dance is very competitive right now. Six out of the eight teams in the Junior Final came from Russia.