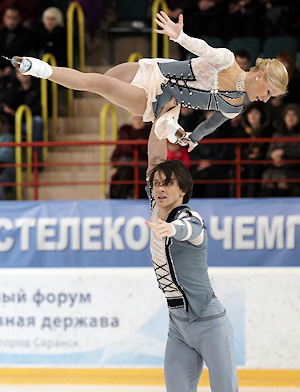 The top three teams after the short program were able to defend their lead in the long program. Tatiana Volosozhar and Maxim Trankov captured their first national title, while Yuko Kavaguti and Alexander Smirnov finished second. Vera Bazarova and Yuri Larionov defended their bronze medal from last year.

Skating first in the final warm up group, Volosozhar and Trankov left nothing to chance, delivering all their technical content clean and with a lot of power and energy, which earned them major bonus points for the quality of execution.

Their Romeo and Juliet routine might not have been the best interpretation of the theme, but the overall impression from their skating was that it was as good as it could ever get. Solid, confident, and inspired, they captured the audience’s attention from the first second of the program and never let it go. They earned a loud ovation at the end of the performance, and scored 141.89 (70.28/71.67) points with a total of 214.66.

According to Trankov, their inspiration stemmed mostly from doing so well in competition.

“Once the music started to play and we made first one element and then another clean, we got caught up in this triumphant mood and let it carry us through the program,” he explained. “For us, there were no judges today. No audience. We skated just for each other just to show what we do everyday in practice.”

They claimed that there was only one element they have been worried about: the final combination spin.

“In two out of three previous events, we have received zero points for it, so naturally we were cautious,” explained Trankov. “We had been flying high through the program, but before that element, we slowed down, took a breath, looked each other in the eyes and carefully executed the spin.”

The team takes the success in stride, but remains modest about their achievements.

“We have done a lot, but there is still more work ahead,” said Trankov.

“We are not planning to jump out of our skins trying to impress everyone,” added Volosozhar. “We just want to do our job, not worry about results.”

“We have a game plan, so far it worked well,” said Trankov. “But of course it is up to coaches to decided what to do next.”

The skaters says that in their camp everyone contributes to the training process.

“We are all involved in all the decisions,” said Trankov. “We are open to all qualified advices. The more opinions and suggestions we hear, the better. Of course we will decide which suggestions to follow, but ultimately we are happy to hear everyone out.”

According to him, it is a stark contrast to what he saw in St. Petersburg.

“In St. Petersburg, every group is closed,” he elaborated. “People sometimes work on lifts in corridors lest other skaters see what they are working on.”

Trankov also believes that collaborative atmosphere is the main change from his previous situation.

“You asked me what is different in working with Tatiana, but I have to say that the key word here is ‘work’, not Tatiana. Now I feel like I am working. Before… well, you could have called it many words, but work is not one of them. Me and Nina Mozer, we share the outlook on life in general – pleasant atmosphere, family, those are important things and glory and money are secondary.”

He said that after the Olympic Games he was ready to quit the sport.

“But then Stas [Morozov] approached me and asked how did I feel about skating with Tatiana… if I would stay in the sport for her, and I said ‘Sure, for her, I will’. When it became known that Volosozhar and Morozov ended their career and that Tatiana planned to continue, every male partner in the world asked her for try out, literally dozens of men. I am proud that she has chosen me.”

The reason for her choice?

“I thought those were the most reliable hands,” said Volosozhar.

Her trust, apparently, was not misplaced. But still, the team believes that there are things to improve.

“We are planning to participate in a show in Switzerland, Art on Ice,” said Trankov. “I have been there before, it is an incredible experience. 14,000 arena filled to the capacity, very enthusiastic crowd. It would be a great learning experience for us to skate to such an audience. Especially since Xue Shen and Hongbo Zhao and Aljona Savchenko and Robin Szolkowy will also be there. I feel we have a lot to learn from them.”

Kavaguti and Smirnov were last to skate. While their soft and enchanting routine to Claire de Lune was an excellent closure after the highly charged performances of the previous teams, it was not flawless technically. Kavaguti put both hands down on the triple toe loop, and later singled the first double Axel in sequence. The team also received only a level one for their death spiral. They picked up 133.29 (63.05/70.24) points for the free and were not able to put a serious challenge to their new rivals. For first time in their career, the students of Tamara Moskvina failed to win the title.

“We skated like a second place today,” admitted Kavaguti at the press conference. “We have to work harder.”

“Perhaps there were some minor technical issues,” added her partner, “but we are very happy that we were able to show what we have mostly worked on – like our new programs, basic skating skills, choreography and presentation. Those components were 100% today. And we will improve technically, I promise you.”

The skaters feel that the change in style is beneficial for them.

“Every skater should try new images and styles,” said Smirnov. “This year we have decided to take a new approach. No classical music for the short program and a more lyrical, romantic long program with a lot of face-to-face skating and interaction between partners.”

They are not discouraged by a failure to defend the title.

“We do not care about placements,” said Smirnov, “we just wanted to skate clean, to please ourselves, our coaches, the audience, and the judges. We are our own main rivals. We have to skate clean and the rest is in the judges hands.”

The 2010 European Champions remain ambiguous about the possibility of doing a quad throw.

“It is a tough question for us,” said Smirnov. “We have started thinking and talking about working on it again about a month ago, but we still have not done it. After serious injuries this summer, we are very cautious. We have already lost a lot of a training time and we are afraid to miss even a day more. We do not give up on it, but we keep pushing actually working on it further and further.”

According to Kavaguti, they are really concerned about their health.

“I am finally able to train at full strength now, but I am still cautious. Seven months [after a shoulder surgery] is not at all long.”

Bazarova and Larionov were able to defend their third place despite a slight mishap at the sequence of two double Axels. Otherwise, the team from Perm were clean and they continue to improve their presentation from one event to the next.

Their recent successes allow the team to show more and more power and confidence in their skating, and forge a more tangible connection with the audience. Their Man in the Iron Mask routine was strong, but with the depth of field, it was only good enough for bronze. The students of Ludmila Kalinina scored 127.94 (66.18/61.76) points for the long and 195.77 in total.

“There was one small mistake and some minor issues,” said Bazarova, “but overall we are happy. We have reached our goal. This competition has been more intense for us than the Grand Prix Final, but we have survived it. We were too emotional, but now it is over. Now we can relax and celebrate the New Year.”

Lubov Iliushechkina and Nodari Maisuradze began their powerful routine to Vangelis’ 1492 Soundtrack with clean triple Salchows and a strong triple twist, but Iliushechkina fell on a throw triple flip. The rest of the elements, including a triple toe loop – double toe loop sequence, level three triple twist, and a throw triple loop were clean, making it one of the best performances ever for the students of Natalia Pavlova. However, after the mistake in the short program, the 120.61 (61.44/60.37) points they eared for the long program were only good enough for the fifth overall (179.49).

Katarina Gerboldt and Alexander Enbert displayed their trademark charisma and showed improved lifts in their routine to Robert Wells Rhapsody in Rock. However, the students of Tamara Moskvina had to fight for the landings of the opening triple toe loop – double toe loop – double loop combination, and later he doubled triple Salchow. The team also had a weak catch on their triple twist. Still, the audience adored their obvious commitment to their program and the rapport between them elevated the program above its technical content. They scored 120.78 (60.54/60.24) points, and with 182.77 in total, remained in the fourth place overall.

Ksenia Stolbova and Fedor Klimov’s intricate and expressive routine to La Strada was among the crowd favorites. However, with two crashes on both throw jumps, only a double twist, and a singled Axel towards the end of the program, the silver medalists of the 2010-2011 Junior Grand Prix Final had to settle for sixth place. They received 107.05 (52.98/56.07) points and 168.08 overall.

Maria Mukhortova and Jerome Blanchard had a disastrous performance with a popped triple Salchow from her, a fall on triple toe loop from him, a fall on one of the throws, and an aborted lift. The students of Oleg Vasiliev earned only 94.85 for the free and with 148.63 points in total, they finished a distant seventh.