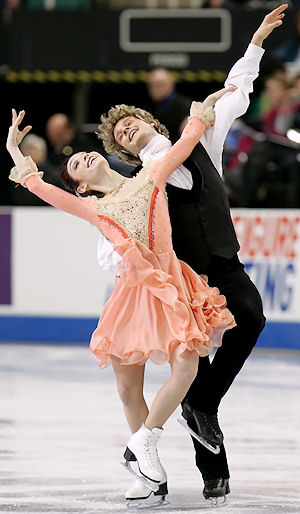 In searching for their third consecutive US Championships title, Olympic silver medalists Meryl Davis and Charlie White are coming dangerously close to perfection. This afternoon in the short dance competition, Davis and white earned perfect level fours on each of their technical elements, and no score lower than 9.11 on a 10.0 scale for their program components.

“I think that this actually was the first time,” White said of he and Davis earning all level fours in the short dance. “I think that at the Grand Prix Final we got level three on the side by side (steps), so this competition is the first time we have actually achieved that.”

The two-time US Champions skated a lovely golden waltz to music from La Boheme and La Traviata, capturing the feel of the rhythm to perfection. Davis, who just turned twenty-four, was regal in her movement, while twenty-three year-old White played the role of suitor with conviction.

“The audience was really great today, and it’s great to be back on national ice,” Davis said after their program. “We’re really happy with how things turned out today.”

Davis and White scored a whopping 76.04 points for their efforts, by far their best score of the season, and seem to be on pace to join an elite group of US Champions with three American titles.

“It didn’t feel perfect, but it felt really, really good,” White said of the short dance. “I think there is timing and expression, and I think that our twizzles weren’t perfect. There were a lot of little things that may not be noticeable, but put together could add up to a perfect performance.”

The 2010 US Junior Champions, Maia Shibutani and Alex Shibutani are the closest challengers to the leaders, and nearly caught their more experienced training mates in the technical elements score.

“The score is awesome,” Alex said proudly. “I think that we have skated well all year, and it feels like we’ve been building up to a performance like we just had. The short dance is new for everyone, but for us the golden waltz is a new compulsory dance for us. It was a challenge, and we’ve had some mistakes earlier in the season, and we feel like we’ve built up to this moment, so it is really gratifying.”

Sixteen year-old Maia and nineteen year-old Alex opened with their The Carousel Waltz program with a spectacular set of twizzles, the highest scoring twizzles of the competition. Like the leaders, the Shibutanis also earned level four for each of their technical elements.

“Just like everyone else, (the twizzles come from) a lot of training day in and day out,” Maia admitted. “Since it was an option (to do three sets of twizzles) this year, our coaches and we decided that it would be a good idea to do the three sets. It pushes us and makes us stronger skaters. It just seemed like the right option for us.”

Shibutani and Shibutani earned 70.47 points with their program, and are in great position to earn one of the three spots available for the US Team in the World Championships later this year in Tokyo.

“Our goal strictly was to skate our best,” Alex explained. “That’s been our goal all season. For us to go out and do what we did, skating last in our group, and having to wait back stage was a great learning experience for us.

Coaches Igor Shpilband and Marina Zueva made it a trifecta, coaching all three teams in podium position after the short dance with 2009 Junior World Champions Madison Chock and Greg Zuerlein capturing third place.

“We think that we are improving in every competition,” Chock revealed. “I think that we have to give a lot more for this piece emotionally.”

Skating to music by Edith Piaf, eighteen-year-old Chock and twenty-two-year-old Zuerlein made the most of a great opportunity to move up in the national standings. Though they only received one level four in the competition, their score of 61.74 points was more than good enough for third place.

“For the most part, I think we nailed it,” Zuerlein admitted. “The twizzles could have been a bit better, but it’s okay.”

Making a huge leap in the standings after finishing in eighth place the previous two seasons were twenty-two-year-old Lynn Kriengkrairut and twenty-five-year-old Logan Giuletti-Schmidt who finished in fourth place.

“It feels great,” Kriengkrairut said of the performance. “We’ve worked really hard for this moment, and we just really love this sport and are really passionate about it and that is what drives us.”

Skating to Kelly Clarkson’s The Trouble With Love, the 2007 US Junior bronze medalists performed with renewed confidence and mature choreography, earning 58.59 points in the competition.

“We’ve been training really well, and for the past couple of months, we have been solid with our performances,” Giuletti-Schmidt said. “We really love our programs this year, and we have put a lot of effort into them. We feel like as a whole, we are a lot more passionate about them, so it has made it easier for us to put out good performances.”

Finishing in fifth place were nineteen-year-old Madison Hubbell and her twenty-two-year-old brother Keiffer Hubbell, the 2009 US pewter medalists, with 57.91 points. Shannon Wingle and Timother McKernan finished in sixth place with 55.07 points, giving Shpilband and Zueva four of the top six teams in this competition.