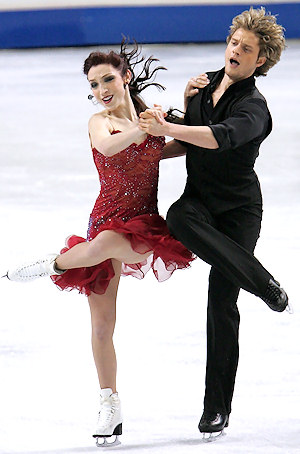 Olympians Meryl Davis and Charlie White won their third US title as expected today in Greensboro, N.C. with a flawless performance that earned them near-perfect component scores. Skating to a passionate tango rhythm, Davis and White put every ounce of energy they could muster into their performance.

“We really wanted to give an emotional performance tonight and we are in fantastic shape,” White explained. “It’s one thing to do the athleticism, but to put the emotion in the program really takes it out of you.”

The champions received level fours for each of their executed elements except for their step sequences for which they were awarded level threes. Their score of 185.48 is by far a personal best for Davis and White since the compulsory dance was eliminated, and sets the duo up nicely for the World Championships in March.

“I think tonight went really well for us, it’s exactly what we wanted to do coming here and just kind of building confidence and increasing the level of performance of that program,” Davis admitted. “I’m really excited and confident going into Four Continents and Worlds.”

In their senior national debut, Maia Shibutani and Alex Shibutani proved that they are ready to compete at this level by winning the silver medals. With the highest technical score of the competition, the 2010 US Junior Champions may threaten Davis and White’s dominance sooner than later.

“This whole year since the off season we’ve been gearing up for this competition, and our goal was to make it beyond nationals and make it into the next two (events),” Alex said after their free dance. “I’m just really proud of ourselves and how we really fought through this week and put out two really good performances. This whole season has been such an amazing thrill for the two of us.”

Shibutani and Shibutani skated to music by Charlie Chaplin and Irving Berlin, and took the challenge of ballroom dancing to heart. Each step was reminiscent of something that Fred and Ginger Rogers might have performed had they been ice dancers. Their score of 173.18 points proved that they were junior skaters no more.

“It’s easy for us to forget that we are first year seniors,” Maia shared. “We wanted to be really prepared and make an impression.

Alex added, “It’s a clean slate when you move up to senior, and we wanted to make sure that our impression was very strong. We wanted to cleanse ourselves of the junior level right away, and I think that we did a good job of pushing ourselves every day.”

Finishing in third place, completing a sweep of the podium by Canton, Mich., trained skaters was Madison Chock and Greg Zuerlein with 154.62 points.

“We’re very happy, it was so much fun,” Chock confessed. “We just went out and wanted to put on an entertaining performance and show our best skating.”

Skating to a sassy and playful program to music from Cabaret, both Chock and Zuerlein were taken out of their comfort zones, but performed beautifully.

“This year was a big step for us,” Zuerlein admitted. “There is more character in our program. Usually Maddie is the one who outshines me, but I think we’re more together this season. I’ve really had to come out of my shell.”

Madison Hubbell and Keiffer Hubbell moved up from fifth place to earn the pewter medals for the second time in their careers. The siblings skated to a medley of music by Yellow and Art of Noise, and were rewarded with 141.70 points.

Lynn Kriengkrairut and Logan Guilietti-Schmitt were in prime position to win the pewter medals, but fell on their midline step sequence, costing them 3.50 points. Their score of 138.42 points, when added to the deductions, would have been enough to finish in fourth place. Instead, the 2007 US Junior bronze medalists had to settle for fifth place.

Grand Prix competitors Isabella Cannuscio and Ian Lorello traded places in the standings with Shannon Wingle and Timothy McKernan and the two couples finished in sixth and seventh place, respectively. Rachel Tibbetts and Collin Brubaker ended up in eighth.