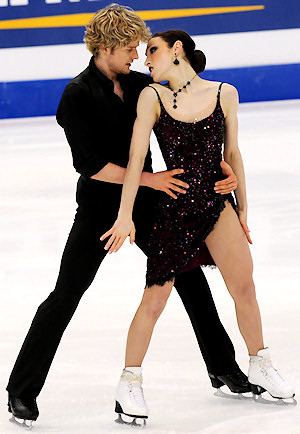 USA’s Meryl Davis and Charlie White took the dance gold at the ISU Four Continents Championships after a dramatic turn events in which Olympic and World Champions Tessa Virtue and Scott Moir withdrew midway through their performance citing injury.

Maia Shibutani and Alex Shibutani made it one-two for the U.S. team by claiming the bronze medal in their debut at their ISU senior level championships, while Canadians Vanessa Crone and Paul Poirier of Canada captured the bronze.

Davis and White showed off their skills in their program to a selection of Tangos. All their elements were smooth and executed at high speed, and the lifts drew gasps from the crowd. However, the World and Olympic silver medalists also expressed the music very well and looked precise and sharp as the character of the Tango requires.

The Americans had a level four for everything but the two step sequences that were a level three, and achieved a new season’s best with 103.02 points and a total of 172.03 points.

“Charlie and I were happy with our skate,” said Davis. “Yesterday’s performance wasn’t exactly what we were looking for, so today we came in knowing we wanted to leave it all on the ice. We are excited going into Worlds after this competition.”

“I think what we are most proud of are the improvements we’ve made with our connection and our connection to the audience,” added White. “It’s difficult doing such a packed program and keeping the emotions there as well. We are still really looking to the Worlds. That’s what we’ve been building toward. That’s the one that counts the most in our books.”

Shibutani and Shibutani drew attention again with an excellent performance to Smile and Let’s Face the Music and Dance. They were rewarded with high levels for their elements, getting a level four for the lifts, spin, twizzles, and the circular footwork and a level three for the diagonal steps. The brother and sister team scored 93.34 points and moved up from fourth to second at 155.38 points.

“We were excited to compete this week,” Maia Shibutani offered. “This is our first year as seniors and our first major championship so we were very excited with our performances. We had a lot of fun out there and think this will really help us going into Worlds.”

“We are both satisfied with the progression of our programs this year,” her brother Alex added. “From the beginning, we have loved our music and we’ve loved our choreography. It’s been a fun process for us and a huge building experience.”

Crone and Poirier also did well in their routine to Eleanor Rigby. The only setback was a level two for the serpentine footwork. The Canadians scored 90.17 points and edged out teammates Kaitlyn Weaver and Andrew Poje for the bronze with 151.83 points.

“We had two very solid performances,” Poirier commented. “They weren’t perfect, and I think we definitely can step up before the World Championships, but we are still very excited and happy with our first medal at the Four Continents.”

Weaver and Poje missed the bronze by less than one point. In their passionate routine to Moulin Rouge, they failed to complete the spin, which was a costly error. The defending champions earned 151.14 points.

“We had no level on the spin, of course,” Weaver commented. “On the entry into the spin, he got caught in my skirt and we couldn’t do the spin, and you have to do it from the entrance. This is very disappointing as we had a level four for almost all the other elements.”

USA’s Madison Chock and Greg Zuerlein came in fifth (142.44 points) with an entertaining program to Cabaret.

“It was a good performance,” Zuerlein noted. “The crowd was great. There was a lot of support. Any of the elements, they would go crazy for them. We forgot about yesterday. It’s a new day. We had a free dance today, that’s all we thought about after the short. You can’t really let it affect you if you do mess up in the short dance. It’s a whole new program so anything can happen.”

China’s Xintong Huang and Xun Zhen were solid in their dance to Singin in the Rain to finish sixth.

“We felt great in the performance today,” Zhen said, “but we need to work on the combination spin as we only got a level two. We feel pretty tired, because we just had another competition (Asian Winter Games) before this one. So we were not in the best condition. We are not sure yet if we are going to Worlds.”

The drama around Virtue and Moir unfolded about one and a half minutes into their program to modern Latin music. They had an issue with the twizzles, bumping into each other at the end, but continued with a smooth diagonal step sequence. The next element, a rotational lift with a spectacular, twist-like entry, looked fine too, but right after it, Virtue stopped. She skated to the boards and talked to their coaches Marina Zueva and Igor Shilpand, while Moir, after a moment, went over to the referee Alexander Gorshkov.

The pause continued for a little while before Virtue and Moir withdrew, citing injury. The couple never came out to talk to the press in the mixed zone, but Skate Canada High Performance Director Michael Slipchuk gave a statement.

“In her (Virtue’s) recovery, getting back into training, at times she still experiences some discomfort and so she’s been feeling just a little bit of discomfort in her quad area and still came and competed the short dance. But in the free dance, she was really was just feeling a lot more stiffness there and at that point just felt she wasn’t going to be able to continue all of the program,” he said.

Slipchuk stressed that this “discomfort” had nothing to do with Virtue’s surgery on her shins.

“Coming back from an injury or surgery, rehabilitation takes some time and they’re been very cautious not to push things because they want to be at the World Championships,” he stated. “Their goal is it to be in Tokyo. They wanted to come to Four Continents to compete. The goal was to do the short dance and free dance, they did the short dance, but the free dance they’re doing this year is very demanding. It’s a very difficult program. It’s not something you can do if you’re not feeling at the top of your game at that time. It’s just part of the recovery process and she’ll continue getting her treatments with her medical staff and they will be in Tokyo. We’re not looking at this as a big concern or big issue.”