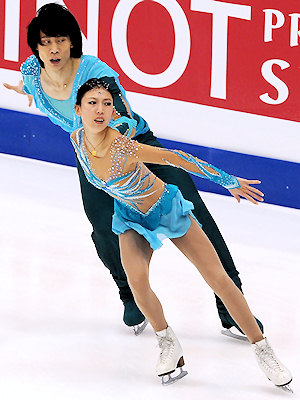 Pang and Tong put out a solid performance of their romantic routine to Je crois entendre encore from  the opera The Pearl Fishers by Bizet. The Olympic silver medalists landed the side by side triple toe, a high triple twist and throw triple loop. Their lift and death spiral garnered a level four and the side by side spin and footwork were a level three.

Pang and Tong achieved a season’s best of 71.41 points, however, they finished a little behind their music and were punished with a one-point overtime deduction.

“We got a seasons best and feel great about it,” Tong told the press. “We wanted to raise the levels of our elements and did quite well. We didn’t feel at the top of our game healthwise, so considering that, we did quite well. We hope to skate even better in the long program.”

Lawrence and Swiegers turned in a entertaining program to City Slickers that was highlighted by a triple twist, triple toeloop, a throw triple Lutz, and a level-four step sequence. The Canadians scored 59.98 points.

“Rudi and I came here and just wanted to have fun on the ice and skate a personal best,” said Lawrence. “We’re happy with how it turned out and we’re hoping that we can continue on successfully tomorrow.”

Swiegers actually became the hero of the day when he helped out rival skater Mark Ladwig (USA). Ladwig, who skates with Amanda Evora, fell on a triple toe early into the short program and couldn’t continue as the heel of the boot had come off. He limped off the ice and had three minutes to repair the boot. Swiegers, who already had skated in the first warm up group, was up in the stands watching the rest of the competition and didn’t hesitate for a second.

“When we saw Mark standing on the ice and the camera zoomed in on his boot I saw that the heel was broken off. I knew the only thing I could do to help out my friend was to take my skate and offer and see if he could need it,” Swiegers said. “I just figured out he would do it for me, so I ran down my skate as fast as I could and offered him to skate with it.’

“We trained with Mark and Amanda (Evora) before, so I’m aware that we have the same sized boot,” he added.”

ISU sports director Peter Krick praised Swiegers’ sportsmanship and presented him with a bouquet of flowers at the draw for the free skating.

Performing to Concerto pour une voix by Saint-Preux, Duhamel and Radford risked a side by side triple Lutz, an element no other pair currently does and only few attempted in the past, but she fell. However, the other elements were strong: a triple twist, an Axel Lasso lift, intricate footwork and a throw triple Lutz. The Canadians earned a new seasons best with 59.92 points.

“It is very difficult,” Duhamel said of the triple Lutz. “It’s been a monkey on my back in the short all year. I haven’t missed any Lutzes yet this week (in practice). I thought it was good, and before I knew it, I was on my butt.  That’s when you tell yourself, ‘Ok, forget about it let’s move on, you’ve a lot of other stuff to do.'”

Her new partner Radford is still amazed about competing at Four Continents.

“This is my first senior championship, so to go out there was a totally new experience,” he shared. “For it to turn out as well as it did is a great feeling. It’s exciting. It’s almost like I’m in a dream. In some way we have  less pressure here than at our Nationals. We have nothing to lose here, but we had something to lose at Nationals.”

Unfortunately, it wasn’t a good night for the US Pairs teams. Caitlin Yankowskas and John Coughlin came in fourth after she doubled the toeloop and stepped out of the throw triple Salchow.

“We left a lot of points out there but we are happy with our best component scores internationally ever,” Coughlin commented. “We didn’t let the mistake affect the performance which is great. We are very happy we are sitting in fourth with some mistakes. That makes us feel that we are pretty dangerous if we skate clean.”

Canadian Champions Kirsten Moore-Towers and Dylan Moscovitch came in fifth. Moore-Towers struggled with the landing on the triple toe and the position of their death spiral was not good and merited only a level one (54.41 points).

“It was a bit of a fight for me personally,” Moore-Towers revealed. “We’ve definitely felt better in the program. Things still got done, but it wasn’t our best for sure.”

Evora and Ladwig finished in sixth. In addition to Ladwig’s fall, Evora doubled the toeloop. However, after an involuntary pause, they produced a  throw triple loop, level-four footwork and a good lift. Ladwig only wobbled on the spins (52.23 points).

“I had a fall on the toe and my boot had a little bit of problem,” explained Ladwig. “I’ll be fixing it tonight. This is Rudi Swiegers’ of Canada (boot), who has a size 9, thank God. It is a little roomier in the toes than mine and I couldn’t do everything that I planned in the program, but we did pretty well.”

Evora was more upset about her own error than about the incident.

“These are things that I can’t control,” she said. “To tell you the truth, I was kind of  disappointed in myself. Right at the beginning, I popped my jump for the first time this season. Unfortunately we had a skate boot problem and we were lucky enough to have another skate and being able to finish our short in order to do a very good long tomorrow. It was an experience that you really can prepare for, but we got through it together, and I’m very proud of Mark. I’m very excited about skating again tomorrow.”

Reigning World junior silver medalists Narumi Takahashi and Mervin Tran of Japan had an off-day. They both fell on the side by side triple Salchow which was downgraded, and Takahashi stumbled on the throw triple toeloop. The Junior Grand Prix Champions are currently ranked 8th.

“This was not a 100 percent performance today,” Takahashi told the press. “I’m pretty upset. We have nothing to lose now so I can try doing my best for tomorrow.”