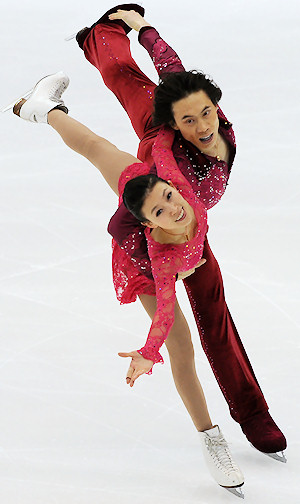 China’s Qing Pang and Jian Tong struck gold at the ISU Four Continents Championships 2011 in Taipei on Friday, claiming their fifth Four Continents title. The two Canadian teams stayed on the podium, but switched places with Meagan Duhamel and Eric Radford of Canada earning the silver medal and Paige Lawrence and Rudi Swiegers taking the bronze.

Pang and Tong gave beautiful performance to the lyrical Liebestraum by Franz Liszt, but it wasn’t flawless. Tong singled an Axel and doubled the toe, but the World Champions hit a triple twist, triple throw loop and Salchow as well as difficult lifts and had a level four for the pair combination spin. The team earned a season’s best of 128.04 points and accumulated a total of 199.45 points to clearly win the event.

“We are always happy to win a competition, and to have won this event for the fifth time is truly special to us,” Tong told the press.

“Although I didn’t do two elements (jumps), I’m still very pleased that we won tonight. I also want to congratulate the two Canadian teams on their excellent performances.”

Tong was clearly upset about missing the jumps.

“At the Asian Winter Games I was better at the jumps. Here, she was. Hopefully I’ll do better at Worlds than this time,” he sighed.

Pang was quick to comfort him: “Next time we’ll do it together,” she vowed.

Duhamel and Radford turned in the most technically demanding performance of the night. The Canadians pulled off a triple flip-double toe-double toe combination, a triple twist, two triple throws and a triple toe. They were also awarded a level four for their two spins and the death spiral. It was not only about the difficulty, their performance also had good flow. The triple flip hasn’t been done by a pairs team at an ISU Championships since USA’s Kristi Yamaguchi and Rudy Galindo landed it at the Junior World Championships in 1990.

Duhamel and Radford scored 121.87 points, a season’s and personal best, and moved up from third to second with 181.79 points.

“Probably exactly one year ago we did our first try-out,” Duhamel said of their partnership. “So we haven’t even been skating together for one year. This is more than we could have asked for. We’re really happy to lay down a good long program, because that’s what we do every single day in practice, and we had a difficult season putting it out there in competition. The performance we weren’t too surprised with, I think it’s more the score and the result that is amazing and we’re shocked by it.”

“Both Meagan and I were single skaters before we started pairs and we were both Junior National Champions of Canada,” explained Radford. “When we first got together, we kind of had an idea that we would do the triple Lutz because we both could do one and it is fairly consistent for us. Surprisingly, the flip wasn’t our strongest jump. So putting the flip into the long… we did it for fun one day and we landed it. It was our coaches’ idea and we decided we can do this. It finally came together for us in this competition.”

Lawrence and Swiegers’ routine to Van Helsing included a triple twist, triple throw Lutz, and side by side triple toe, but Swiegers singled an Axel. The team earned 111.75 points and dropped to third with 171.73 points to medal in their debut at the ISU Four Continents Championships.

“We’re both very excited to place third and going home with the bronze medal,” said Lawrence. “This is our medal this year. We got third a lot this year, but we are happy. I think it is a good beginning for us.”

U.S. Champions Caitlin Yankowskas and John Coughlin finished fourth as they did last year. They nailed a triple twist, triple toe-double toe-double toe, and double Axel in their program to Ave Maria which they dedicated to Coughlin’s mother who had passed away last year. Their only error came when they singled the throw Salchow.

“Whenever you see singles like that, a lot of times it’s missed timing completely,” said Coughlin of the throw jump. “When we’re under stress, we need to always stick to our rhythm and I think sometimes you can get out of that a bit. Easy mistake to fix, something we don’t do at home often.”

Canada’s Kirsten Moore-Towers and Dylan Moscovitch placed third in the long (111.81) and filth overall (166.22). Their performance to Les Miserables was strong as well, with the highlight being a triple twist immediately followed by a triple toe-double Axel sequence. However, Moore-Towers crashed on the throw triple Salchow.

“We’ve had a long and very good year,” Moscovitch offered. “It was a major breakthrough. Unfortunately the short program didn’t go how we wanted. I’m very happy that we came back strongly today. We came to this competition mostly to prepare for next month (World Championships). I think we are on a very good path to the next one.”

USA’s Amanda Evora and Mark Ladwig didn’t have their best skate, but they were obviously affected by the incident in the Short Program on Thursday when the heel of his boot had come off. Evora fell on a double Axel and (downgraded) triple toe while Ladwig singled the Axel. Evora also put her hand down on the throw triple Lutz.

“We’ve had quite a stressful week here,” said Evora. “We have been skating great in our practices and we’re disappointed we didn’t show it in the performance. However, with the circumstances, I’m taking the attitude that it’s better to make mistakes here than in a month from now.”

After finishing the short program yesterday, thanks to Rudi Swiegers lending Ladwig a boot, Ladwig was busy fixing his skate for the free program.

“With the help of the local organizing committee, we drilled out the heel from under the sole all the way through,” Ladwig explained. “We bolted it from top to bottom so it won’t come apart. I also added stir-ups basically to the sides. The layer that separated was smothered in epoxy glue. Those three fail safes should make it through Worlds.”

Ladwig hopes to keep the boot until the end of the season in order to avoid breaking into new boots before Worlds.

“I’m angry at myself, because I made the same mistake (like yesterday) on the triple jump,” said a disappointed Takahashi. “In the air, yesterday’s mistake came back to my mind, but I shouldn’t think about it. That led to a bad result.”