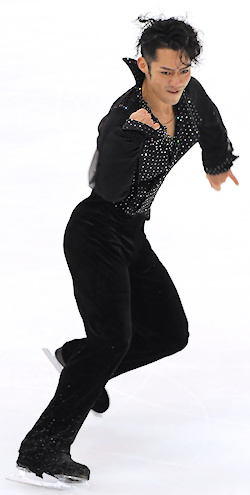 World Champion Daisuke Takahashi won his second Four Continents title Saturday in Taipei and positioned himself as one of the top contenders for the World Championships next month in Tokyo. Youngster Yuzuru Hanyu, also from Japan, snatched the silver medal, while USA’s Jeremy Abbott bagged the bronze.

The season hasn’t gone too smoothly for Takahashi, who was left off the podium at the Grand Prix Final and finished third at the Japanese Nationals in December, but the reigning World Champion is rebuilding confidence and strength as Worlds in his home country are drawing closer.

Winning the Four Continents title was another stepping stone for the 24-year-old Japanese, although his performance wasn’t perfect. Takahashi crashed on his opening quad toe that was downgraded, but he recovered to land a triple Axel-double toe, another triple Axel, and four more clean triple jumps. However, the back end of his triple Lutz-triple toe combo was underrotated. He earned a level four for one spin, but the other two were a level two. The 160.51 points for this performance were a season’s best, and overall, the skater accumulated 244.00 points.

“I made several small mistakes including the mistake on the quad,” Takahashi noted. “I’m not satisfied with today’s performance. I realize the performance was not good enough for the World Championships in Tokyo. Also, I felt tired at the end of the program, so it’s not a perfect performance. But I’m pretty happy about the score and the placement.”

Hanyu turned in a solid free to Zigeunerweisen by Pablo de Sarasate that was highlighted by a beautiful quadruple toeloop, a triple Axel-triple toeloop, another triple Axel, and four more triples. However, the Lutz didn’t work for him today as he singled the first one and put down his hand on the second. The current World Junior Champion scored a season’s best of 151.58 points, and stepped on to the podium in what was his senior-level championships debut with 228.01 points total. He was the only man tonight to put out a clean quad.

“It seems like I’m in a dream,” the 16-year-old commented. “I can’t believe this happened and that I’m on the podium at the Four Continents Championships. I don’t have yet any emotions about it, because I haven’t realized it yet. The quad was better than I ever expected, I’d give myself a 120 points out of 100 for it.”

For Abbott, it was about redeeming himself and ending the season on a high note. He landed six triples in his program to La Vita E Bella, but some were a little shaky and he fell on an underrotated quad toe. The two-time U.S. Champion achieved a season’s best with 148.98 points and dropped one spot to third at 225.71 points. It was his first medal at ISU Championships since 2007 when he also took the bronze at Four Continents.

“Best of the season,” the 25-year-old said. “That’s all I could ask for to come here and do the best program that I’ve done this season. The goal all season was to progress in each competition and to put my best out at Four Continents and Worlds. I’m doing that, but unfortunately there’s not that step to Worlds. There is next year. I’m done with this season. I can leave here with my head held high.”

Abbott explained that he will keep on training as he is the first alternate for Worlds.

“I’ve had to train as an alternate plenty of times and it’s difficult,” he pointed out. “It’s not the same intensity. It’s a step down so that you don’t wear yourself out in case you do get called. When you train really hard with no goal, it’s harder than training really hard with a goal. I want to keep my programs up, keep my consistency going, and keep my endurance up most importantly. If I get the call I will be ready.”

Takahiko Kozuka came back stronger from his sub-par short program, but wasn’t perfect. The Japanese Champion hit two triple Axels, but the triple loop was wobbly. He also doubled the Salchow and missed the quad toe. Kozuka pulled up from sixth to fourth at 223.52 points. He was ranked second in the free skating.

“My technical score is not high because of my mistakes in the jumps,” the 21-year-old stated. “I expected that, but I changed the choreography just before this competition and I skated well for the components part. In order to do better, I have to put together the technical and the choreography side. There is one month to go before the World Championships, so I’d like to improve my new free skating. There is more body movement to have more presence on the ice.”

USA’s Adam Rippon was in a similar situation like last year. He had missed the Olympic and (originally) the World team (later he came in as an alternate) and was sent to Four Continents. Last year, he didn’t skate too well in the short but won with an excellent free skating. This year the American had to settle for fifth place. The triple Axel gave him trouble again. Rippon doubled the first one, and stumbled on the second one which was downgraded. Three other jumps were underrotated. The defending champion scored 210.01 points.

“I don’t know what the problem has been,” Rippon said about the Axel. “When I started out in the summer, it felt much better. I’d rather learn this lesson this season rather than one closer to the next Olympics. I have to completely change the Axel technique.”

“I know I can do much better and what I showed today isn’t the kind of skater I am,” he observed. “I felt off and tried my best to fight it and continue no matter what. I wasn’t over my feet and I’ve felt like that for the last couple of competitions. I guess it’s back to the drawing board.”

Jinlin Guan was the top ranked Chinese man in sixth place with all three competitors giving solid performances. Guan fell on the quad toe but his seven triples were clean. However, he does not include a triple Axel into his programs.

USA’s Armin Mahbanoozadeh dropped from fifth to seventh. Several jumps were shaky or not clean.

“I didn’t feel like I could get into the program like I have before,” he admitted. “I felt like instead of being really focused on every element, I felt a little distant. I wasn’t able to do my best or what I’ve been training. That’s disappointing.”

Jialiang Wu of China reeled off the maximum of eight triple jumps with the only glitch being a flip with an edge call. He came in eighth.

Shawn Sawyer rounded up the top ten. The Canadian’s free program to Alice in Wonderland is truly a little spectacle on ice. Each gesture and each move feels right and looks great, and he really brings his character of The Mad Hatter across. Sawyer showed off his flexibility in his spins and a spiral move. Unfortunately, some jumps were tight on the landing and the Technical Panel deemed not less than four of them underrotated. That cost a lot of points, but Sawyer took it in stride.

“It wasn’t my best performance of the season, that’s for sure,” he said. “I skated way better at Nationals, but I’m building up towards the World Championship. I have not been (there) since 2006, so I really want to be at my peak over there. I love doing this program so much. I really feel it’s like a part of me. I had fun out there. I finished with a smile and if I can go home and I learned about this experience and I can grow into the World Championships, then it’s all good. I just have to look at the positives and fix the negatives.”

“The jumps are way better than that in practice,” the 26-year-old summed up, “so I have to do the jumps that I do in practice in the program, in the competition when it counts. Not only on the warm up.”

Teammate Kevin Reynolds wasn’t able to improve from yesterday’s short program. He fell on both the quad toe and Salchow with the latter one being underrotated. The Canadian also underrotated a triple Axel and singled a loop and the second Axel. He pulled himself together in the second half of the program and hit five triples.

Misha Ge of Uzbekistan was a little discovery in Taipei. The 19-year-old competes in his first season internationally and drew attention with his musicality and expressiveness. He has solid triples up to the Lutz, and finished a respectable 12th.