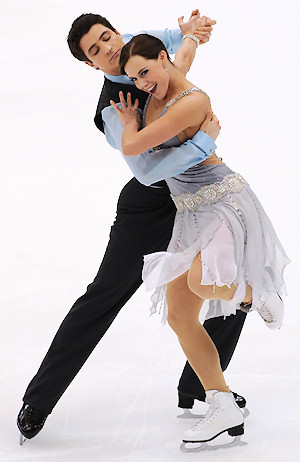 Olympic and World Champions Tessa Virtue and Scott Moir of Canada came back strong after a long break due to injury to win the Short Dance at the ISU Four Continents Figure Skating Championships 2011. Virtue and Moir edged out their friends and toughest rivals, World and Olympic silver medalists Meryl Davis and Charlie White (USA), by just 0.39 points. Canada’s Kaitlyn Weaver and Andrew Poje are currently third.

It was the first competition for Virtue and Moir since taking the World title last March. The team had to postpone their season debut after Virtue underwent surgery on both shins last fall to treat chronic exertional compartment syndrome, a painful injury. She resumed on-ice training in December and started to train fully only last month, but the programs were already mounted in the summer.

The Olympic Champions put out a nostalgic dance to a Waltz entitled Night and Days and to the tango piece Schenkst Du Beim Tango Mir Dein Herz. Although they certainly didn’t look rusty, they appeared a little cautious. The team had a level four for all their elements except for the side by side footwork, and scored 69.40 points.

Both were very pleased with their performance and their return to competition.

“It’s a great feeling,” Moir said. “We knew we had that fire in us, but until you’re back on the ice, you don’t really know what the feeling is going to be. At the beginning of the program I was just saying how excited I was to be back competing. Eleven months isn’t that long, but it’s a completely different story doing shows and doing competitive programs. We laid down a really solid skate, so we’re happy.”

“It’s a great start,” agreed Virtue. “We weren’t sure what to expect. The moment we stepped on the ice for practice, we had that spark and drive. We’re hungry for it, for sure. It doesn’t take that much to get right back into the competitive feel.”

Virtue also felt that they actually benefited from the break as they were exhausted from the Olympic season and post Olympic commitments.

Davis and White opted for a very classical Waltz to La Boheme and La Traviata. The reigning Grand Prix Final Champions were awarded a level-four for their rotational lift, the twizzles and the second section of the Golden Waltz. However, Davis’ twizzles were a little wobbly, and the first part of the Golden Waltz and side by side footwork were graded a level three. Still, the Americans earned a seasons best with 69.01 points.

“Throughout the entire year, we have consistently gotten level four,” said White. “It must have been a little mistake that we didn’t notice I think we’ve done it (the program) better. We got a season’s best internationally for that. I think we could have sold it more, but technically I thought it felt pretty good. In the free dance, we’re going to want to come out a little stronger.”

“We have slowly been improving through the season,” Davis noted. “I think here we really wanted to come out and give a strong skate. I think we were really focused and maybe we just got a little too tunnel vision on skating well. We have to remember to present to the audience and the judges.”

Weaver and Poje picked up the highest technical sore of the day as they were the only ones to have a level four for all elements. Their program to At Last and Dancing Cheek to Cheek looked classy and had character. The defending Four Continents Champions scored 65.45 points, a new seasons best. However, they didn’t think that it was really their best performance of the season so far.

“To be honest, it really wasn’t,” admitted Weaver. “We felt kind of off balance all week here, like just not quite over our feet. But that was the best we’ve done all week so far and definitely not our season best. We hope to improve this performance by a lot for the next competition, but we’re so happy that we’ve been able to achieve all the level fours because we’ve been working on that so hard. It’s been a very difficult challenge, but we’re happy that we can do that kind of performance under pressure and even when we’re not feeling at our best.”

“I think it’s a testament to how much work we’ve done over this season,” added Poje. “Even though it wasn’t our best right now of what we’ve been doing lately, it still shows how we improved our skills.”

U.S. silver medalists Maia Shibutani and Alex Shibutani continued their ascent in their first senior season with a solid performance to Carousel Waltz in which Alex slightly struggled on the twizzles. The brother-and-sister team finished fourth with 62.04 points.

“We salvaged the level though, which was important,” Alex Shibutani said referring to the twizzle. “We are thrilled about getting level fours on both sides of the Golden (Waltz). Even though we got level four at nationals, it was good to get that continued validation that we’re in the right direction. Definitely more to work on going into Worlds, but we were happy with our performance today.”

Grand Prix Final bronze medalists Vanessa Crone and Paul Poirier of Canada are currently ranked fifth with 61.66 points. Their dance to Fallin’ by Alicia Keys looked smooth, but two level threes on the first Waltz section and the side by side footwork cost them a few points.

“We came here as the National Champions and Grand Prix Final medalists,” said Crone. “That gives us a lot of confidence, but it doesn’t make us nervous.”

USA’s Madison Chock and Greg Zuerlein finished sixth with 57.14 points. He was shaky on the twizzles, but the rest of their routine to songs by Edith Piaf went well.

“It was really shaky,” admitted Zuerlein. “I just tried to hold onto it after the first two turns which I think I did for the most part. But it was wobbly of course, and I’m sure it looked like it. In practice it’s usually pretty good.”

The dance teams from China, Mexico and Australia were not able to break through the North American phalanx and are ranked seventh through 12th .