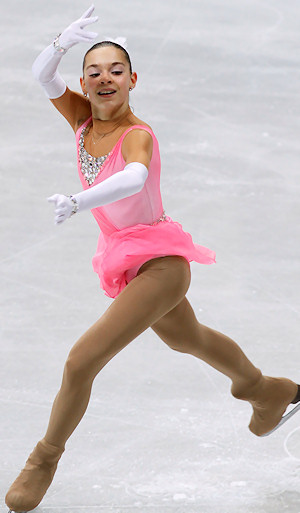 Adelina Sotnikova of Russia currently leads by less than a point after the ladies short program at the 2011 World Junior Figure Skating Championships.

The Russian girls dominated the Junior Ladies Short Program as expected with Adelina Sotnikova edging out Elizaveta Tuktamysheva by less than one point for first place, however, USA’s Christina Gao is not far behind in third.

Overall it was a high-level competition with seven girls going for a triple-triple combination and four of them landing a clean one.

Sotnikova’s Waltz program was highlighted by her triple loop, double Axel, excellent level-four spins, and the footwork, however, she underrotated the toe in her triple Lutz-triple toeloop combination. The 14-year-old from Moscow scored 59.51 points.

“My skating was today was good, but at the same time it was not so good,” she said. “Hopefully tomorrow I can do everything tomorrow and everything a 100 percent. All girls at Junior Worlds are strong and are trying triple-triple combinations. This is good because is makes it more competitive.”

A Korean reporter asked the Russian skaters what they think about Yu-Na Kim.

“I really like Yu-Na Kim,” Sotnikova answered. “Her jumps and other elements were very good at the Olympic Games in Vancouver. I like the way she does her combination and obviously we have to learn from her the ease and softness of her jumps.”

Tuktamysheva turned in a strong performance of her oriental-themed program to Harem (The Casbah) by R.E.G. Project. She opened with a perfect triple Lutz-triple toe combo, followed by a triple loop and an excellent double Axel with her hand over her head. Her flying camel spin merited a level four while the layback and the combo spin were a level three. The 14-year-old improved her seasons best by a little over one point with her score of 58.60.

“I am very pleased with my performance today,” the student of Alexei Mishin and Svetlana Veretennikova offered. “I tried not to think that this is the (Junior) World Championships, but just an ordinary competition, and as a result, I skated well. I hope that tomorrow everything will be even better.”

Tuktamysheva confirmed that she is working on the triple Axel, but won’t try it tomorrow in the free skating.

“I do the triple Axel in practice,” she explained, “but it is not consistent yet enough to put it out in international competition. I will approach this step by step. First I’ll do it in competition practices, then in the six minutes warm up and then hopefully I can do it in the program.”

Skating to Violin Concerto in E Minor by Felix Mendelssohn, Gao produced a triple flip-triple toe combination, triple loop and two-level four spins. However, she barely hung on to her scratchy double Axel. The American earned 56.80 points to prevent a Russian sweep of the short program.

“I am very happy with how I skated today, especially because last year at Junior Worlds my short program was not my best,” the 16-year-old said. “I am happy that I could come here and do what I prepared. I’m excited for tomorrow as well.”

“I think it is very exciting that junior competition has so many triple-triples,” Gao replied when asked to comment on the high level of the event. “When we move up to seniors, we’ll have triple-triples and hopefully even more exciting (elements), like triple Axels and quads like the men.”

Russia’s Polina Shelepen delivered a clean program to a modern version of Swan Lake (similar to Daisuke Takahashi’s famous Hip Hop Swan Lake in 2008) that featured a triple Lutz-triple toe, a triple loop and double Axel. Her spins were all graded a level four and the Muscovite was happy about a seasons best of 56.58 points.

“I did everything today and I got all my levels,” the Muscovite noted. “It was the best short program of the season. I was nervous when I went out to skate, but I was able to cope with my nerves. My goal for tomorrow is to skate clean.”

USA’s Agnes Zawadzki lost quite a few points when she added just a double toe on to her triple toe for a combination. Her triple loop was a little shaky, but the double Axel was fine and the spins merited a level four. The reigning World Junior silver medalist is sitting in fifth with 53.17 points.

“My mind was kind of blank after landing the first triple toe,” the 16-year-old admitted. “It was kind of disappointing. I’m happy that I was able to fight and land the jumps after that. Doing the jump after the mistake is the most important thing. All my other elements were strong. It’s just like last year, I’m not in the greatest position, but I have nothing to lose.”

As the defending silver medalist, Zawadzki would like to be on the podium again, but tries not to think about it too much. “I try to focus on just one thing at a time and not get too far ahead of myself. I just focus on doing my best in the long.”

“As I didn’t have so much time to prepare for this competition, I just wanted to skate without any mistakes,” said Oba. “I didn’t expect to place as high as I did, and therefore I am very pleased.

“I hardly believed it when I was told that I have been selected for Junior World,” she added.

Teammate Risa Shoji of Japan nailed a triple Salchow-triple toe, but her triple loop was underrotated. She showed good attack and connection to the music in her routine to Libertango, and finished seventh with 51.49 points.

The elegant Yretha Silete of France also skated well with a triple flip-double toe combination. She is ranked ninth (50.24 points).

U.S. Junior Champion Courtney Hicks had drawn to skate first out of the 30 competitors in what was her first international event. The 15-year-old went for a triple flip-triple toe, but the second jump was cheated and downgraded. The double Axel and triple loop were high, and she hit original positions in her strong spins that were all graded a level four. She earned 49.98 points and came 10th.

Yuki Nishino of Japan underrotated both her Lutz and loop to finish 11th (46.09 points).