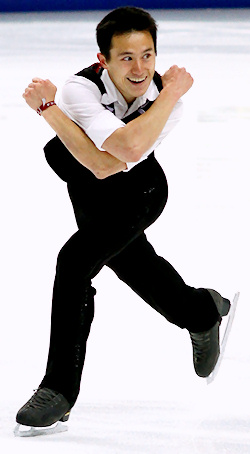 Patrick Chan of Canada scored a new personal best of 93.02 points in the Men’s Short Program at the 2011 World Figure Skating Championships.

Patrick Chan of Canada won the Men’s Short Program at the 2011 ISU World Figure Skating Championships in Moscow, Russia, and established a new record and personal best score en route. He has a lead of more than ten points over Japan’s Nobunari Oda and Daisuke Takahashi who came in second and third.

Chan gave an extraordinary performance to Take Five in which he appeared relaxed and smooth. The quad-triple toe, the triple Axel, and triple flip were effortless and earned mostly a plus 2 grade of execution (GoE) from the panel of judges. The combination spin, the flying sit spin, and the straight line footwork merited a level four, and the change camel spin was a level three.

“To be able to achieve that (record) is kind of a dream come true,” the Canadian Champion told the press. “The program itself was excellent. I was really proud of myself. I actually was quite nervous today because the whole event was postponed. All the events that came prior to it made it a special world championship I believe, not only for me, but for the Japanese skaters as well.”

“I was very happy to keep it together mentally and do what I am able to do in practice and to be able to translate it to competition was a very tough task,” the 20-year-old noted. “I think in these circumstances it is very important to keep a tight mind,” Chan added, referring to his lead. “It is very easy to get carried away. It’s important for me to stay focused on my goals. What I did today is a little bit of foretelling for tomorrow and I’ll repeat what I did today and use the same kind of mental and physical approach as I did today.”

Oda stepped out his planned quad-triple toe in his program to Storm by the Japanese group “Yoshida Brothers,” however, the Japanese rallied back quickly with a triple Axel and also was smart enough to tack a triple toe on to his triple Lutz for a combination. The Grand Prix Final silver medalist scored 81.81 points.

“I also wanted to finish this season with a very good performance,” Oda, 24, commented. “That’s what I concentrated on, so I put out all of my very best out there today. Given last year’s record of the 28th place, of course I am happy with today’s performance. And I am just happy to be able to perform in tomorrow’s free skating.”

Takahashi had probably the most artistic performance of the day. He lived each beat of his Latin dance program and the crowd cheered appreciatively – especially for his footwork. However, the defending World Champion didn’t go for a quad and lost in the element score. He produced a triple flip-triple toe (with an edge call on the flip), a triple Axel, and triple Lutz. His spins and footwork were graded a level three, and he received 80.25 points.

“Regarding my performance today, I wouldn’t say it was 100% complete,” Takahashi noted. “Maybe it sounds funny, but I did enjoy it. I was very comfortable with my performance.”

“Given the gap, of course, I have to give my 100% and a perfect performance on the ice,” the 25-year-old responded when asked what he wants to do to overcome the gap to Chan. “Maybe tomorrow there will be a different wind. I don’t know. There just might be a miracle. We will see.”

Russia’s Artur Gachinski was a little surprise in fourth place with 78.34 points. The 17-year-old hit the only other quad-triple toe combination of the day, but stumbled on the landing of his triple loop. He skated to Pink Floyd.

“My performance was good,” said the Russian silver medalist. “I made only one little mistake on loop,” he said.

Gachinski seemed unimpressed about competing in his first World Championships. “I feel no difference. It’s just another competition for me, just one next step. I felt no pressure, only pleasure from skating for my audience.”

European Champion Florent Amodio’s precise performance to Once Upon a Time in Mexico included a triple Axel, triple Lutz-triple toe, triple flip and two level-four spins, however, the flip received an edge call. The Frenchman came in fifth with 77.64 points.

“I am very satisfied with my program,” the 20-year-old told the press. “Coming here as European Champion, I knew I had to stay clean on everything, and I am glad I did. I had some problems preparing with my boots getting soft. This season didn’t seem to end before these championships, but I just tried to forget about that and do my best. We worked a lot on all the elements with (coach) Nikolai Morozov. I was in France for one and a half months and came to Moscow two weeks ago.”

Takahiko Kozuka is sitting in sixth place. The 22-year-old earned a level 4 on all his spins, but stumbled on the triple Axel.

“I’m mortified because I couldn’t do a perfect performance,” said the Japanese Champion. “I think it is very important to land the jumps, but I couldn’t do it today, so I can’t be satisfied with my performance. I can’t figure out what happened to my Axel. Recently, at competition, I made a mistake on the Axel sometimes. Maybe therefore there was some extra pressure although I didn’t feel it that much.”

Michal Brezina of the Czech Republic turned in a crisp performance to Japanese Kodo Drums, and apart from a slight overrotation on the triple flip-triple toe combo, made no errors. His triple Axel was a beauty. He finished seventh.

“I am satisfied with how I skated today,” said the 2009 World junior silver medalist. “I made only one little mistake on the landing (of the combination jump). A little stupid maybe. I think I opened a little late. This mistake may cost me a place, because the difference is about 0,10 points, but the most important thing is that I didn’t fall.”

Teammate Tomas Verner fell on his quad toe but landed the triple Axel and smartly switched his combination to the triple Lutz to finish 8th.

“I am actually not very happy with this program,” said Verner. “I tried to get my points with my triple-triple combination because I am not going to be in the shake up for a medal here with such a performance. I was well prepared though for these championships even though the season was long and everything hurts (knee and back).”

Reigning World bronze medalist Brian Joubert stepped out of his quad toe and is ranked ninth.

“I am not happy with this performance because I made a big mistake on my combination jump,” the Frenchman noted. “The rest of the program was ok. I tried to fight, but I lost so many points on the combination.”

“This season is very difficult for me,” Joubert offered. “I’ve changed many things and I tried to get better, but it was maybe too early for me. I know I can come back, but it is not this season. For the free skating, I want to skate clean and give a good performance to the Russian audience.”

Denis Ten of Kazakhstan rounded up the top ten after the short program. His Tango program was highlighted by a triple Axel, triple Lutz-triple toe, and triple flip.

None of the American men cracked the top ten. Richard Dornbush, Ryan Bradley and Ross Miner are ranked 11th, 12th and 13th.