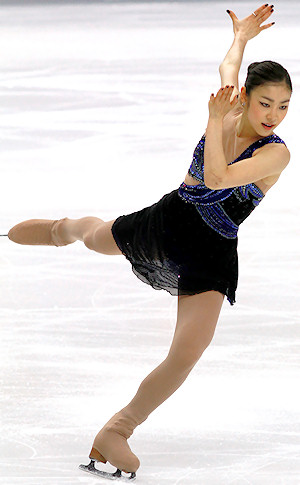 Olympic Champion Yuna Kim won the Ladies short program in Moscow on Friday, but she wasn’t flawless. The Korean has a small lead of 0.33 points over Japan’s Miki Ando. Ksenia Makarova continued the success of the Russian skaters at the event by finishing third.

Kim had drawn to skate last, a number that she doesn’t particularly like. The Olympic Champion looked somewhat nervous but then attacked her Giselle program. However, she stumbled out of her triple Lutz and was unable to add the planned triple toe for a combination. The 21-year-old recovered quickly to add a double toe to the triple flip. She also produced a double Axel and three level four spins to score 65.91 points.

“I have been doing a lot of clean short programs (in practice) and my warm up was perfect, but I was a little nervous,” admitted Kim. “I’m a little disappointed that I didn’t do a clean short program today. I tried to focus on my flip and then I missed the combination (she stepped out of the Lutz), but I was able to switch my combination to the flip, adding a double toe to it. The rest of the program wasn’t so bad and I’m in first place right now, so I’m pleased about that.”

Ando looked very elegant in her routine to selections from the The Mission soundtrack. The 2007 World Champion completed a triple Lutz-double loop, a triple loop, and double Axel. The Japanese had the same levels for her spins and footwork as Kim, and earned  65.58 points.

“I was really nervous because when I skated as the first of the group, most times something bad happened and before coming out from the ice, I remembered that,” said Ando. “I skated pretty well even though I am not satisfied with my spins. Because of the catastrophe that happened in my home country Japan, I really try to cheer people up with my performances and make them smile, so I feel my first job was done.”

Makarova turned in a lively Flamenco by Didulja. She opened with a big triple toe-triple toe combination followed by a triple loop and double Axel. The 18-year-old really  played with the crowd of 11,000 in the Megasport Arena, and seemed to enjoy every second of her performance. She was rewarded with a season’s best of 61.62 points and the small ISU bronze medal for the short program segment.

“I am very pleased with my performance,” said Makarova. “I just thought that I want to skate like I do every day in St. Petersburg in practice. My jumps were good and there were so many emotions – even more than I thought – and the audience was amazing. I am very surprised to sit here with the legends, next to Olympic Champion Yuna Kim. All my hard work paid off. For tomorrow I want to do the same thing and I hope it works out.”

The skaters ranked fourth to seventh are only three points away from the podium. Alissa Czisny sits in fourth with 61.47 points. The U.S. Champion made no major errors, producing a triple Lutz-double toe, double Axel, and trademark spins, but lost a little more than a point as she received an edge call for the triple flip.

“I was nervous as at my first two World Championships the short programs (in 2007 and 2009) weren’t so great,” shared Czisny. “So I just wanted to go out and do my best today. I really fought for everything in that program and I was satisfied with my performance. I just want to go out tomorrow, skate my best, and show the crowd a lovely (long) program.”

Alena Leonova entertained the crowd with her Circus program. The Russian nailed an effortless triple toe-triple toe, a triple flip, a double Axel, and also had a level four for all three spins. She really sparkled and almost got carried away when she slipped in the step sequence.

“I feel great!” exclaimed Leonova. “I thought that it will be so hard to perform here because of the pressure. I wasn’t even very happy that they moved the World Championships to Moscow, but in the end, it was great. The audience was amazing and I took my energy from them. They were cheering even during the program. I landed a jump and heard how they applauded. I had so much energy that I nearly fell on my step sequence, but luckily was able to stand up and make fun of it.”

Italy’s Carolina Kostner made the final flight in spite of a fall on the triple flip that she had brought back to her short program for the first time this season. The triple toe-triple toe and the double Axel were solid, and the interpretation of the Galicia Flamenco was exquisite.

“I felt good today,” Kostner told the press. “It was good to start the competition finally. I really wanted to have a good skate. I was maybe too focused on the triple flip I fell on. I wanted to have too much control of it and maybe held it back with this. This was such a shame. Even though our practice was sometimes a little difficult because of the ISU seminar which took place in Oberstdorf, I had a good preparation.”

Mao Asada’s nightmare of bad short programs returned in Moscow as she faded to seventh . The reigning World Champion didn’t have a good morning practice and lacked confidence and attack in her performance to a Tango by Alfred Schnittke. The Japanese went for the triple Axel but two-footed and landed forward. The Axel was downgraded and she got earned 2.09 points for it. The triple loop was fine, however, she underrotated the flip in her combination with a double loop. The 21-year-old looked close to tears while waiting for her marks.

“I was very disappointed about my mistake on the triple Axel,” shared Asada. “I’m sad because I couldn’t show what I’m capable of and I was focusing on my short program so much this season, but I couldn’t do it. Now I’ll switch my mind set on tomorrow. I’ll try to put everything together and just want to put out a strong performance.”

USA’s Rachael Flatt finished eighth. She doubled her solo Lutz. “My leg (foot) injury has been bothering me a little bit on the Lutz,” she revealed, “but everything else has been really good. I am now going to be pushing through my elements in the free skate and try my best.”

Kiira Korpi missed her combination when she fell on the triple toe. “I don’t know what happened, it is really difficult to say right after the skating. Maybe I went too much with the flow and should be more in control, or the speed was too high. It’s hard to say,” the Finn commented.

Japan’s Kanako Murakami didn’t do her best either. The 2010 World Junior Champion underrotated the second jump in her triple toe-triple toe combination and stepped out of the double Axel.