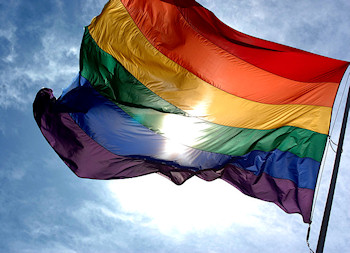 On June 28, 1969, the gay rights movement was born in the Greenwich Village neighborhood of New York City. Brave men and women at the Stonewall Inn caught up in a police raid early that morning inspired a community to resist the anti-homosexual establishment and fight for change.

More than 50 years later, New York Governor Andrew Cuomo signed State Bill A08354 into law late Friday evening, making the Empire State the sixth and largest, to allow same sex couples the right to marry. With so much to celebrate this year, Golden Skate proudly honors the LBGT (lesbian, bisexual, gay, and transgender) community with uplifting stories of gay pride from some of our favorite skaters.

In the late 1980s and into the early 1990s, Doug Mattis was a staple at the U.S. Championships, winning the junior men’s title in 1985, and skating in the final flight of the senior men’s free skate several times. An artistic sort, Mattis’s kryptonite was the triple Axel, which was fast becoming a required move to have any hope of standing on the podium.

“My triple axel was horrible,” Mattis said with a laugh. “I was training with Frank Carroll at the end of my eligible career, and his school of thought is that you have to have the numbers to put an element into your program. I was hitting one in about every 18 or 19, so I never put it in my programs.”

What Mattis did have was the ability to pull the crowd into his programs, as well as a one-footed back flip.

“At nationals in 1991, I skated last in the short program, and I skated a relatively clean program,” he recalled. “I did have a little issue with my combination spin, but I landed all of my jumps. I was used to being in the medal hunt after the short program, and then all of the sudden I was completely out of it. In the competition, there were only four clean short programs, and most of the other skaters missed two jumps. For example, (the 8th place finisher) fell on his triple Axel and popped his Lutz. I landed all of my jumps, got a standing ovation, and was in 14th place.

The next 24 hours gave Mattis time to think, and after a chance meeting on the concourse in the arena, he knew that it was time to move on from amateur skating.

“A man and his wife came up to me and said that they didn’t understand why I was placed so low, and how can an entire arena of people have a different opinion than the judges,” he remembered. “It was then that I knew it was time to move on, but it had nothing to do with the judges. I realized that the game had changed, and I realized that I just wanted to entertain.”

Mattis told himself that if he skated a clean program that day, he would throw in a back flip at the end of his program.

“I don’t know that I was being a rebel,” he said. “It was more about giving something to the audience.”

Mattis did skate clean, threw in the back flip, and earned one of the only standing ovations of the night. He finished in 13th place.

Throughout his career Mattis never kept his sexuality a secret, but was thrust into the gay spotlight in 1994 when he was invited to skate an exhibition at the Gay Games in New York City, which he considers to be one of the biggest honors of his career. A 1996 article in The Advocate solidified Mattis’s status as one of a handful of openly gay athletes.

“At the time (golfer) Muffin Spencer-Devlin and I were the only athletes who were willing to talk with the media about our sexuality,” Mattis recalled.

Mattis believes that being out never hindered his career as an athlete, but instead he believes that everything increased with his coming out.

“When I was younger, I thought about keeping my sexuality under my hat, but I didn’t want to disappoint my market,” Mattis said. “I was invited to skate in the Gay Games, be the Grand Marshall in Gay Pride parades, and was still getting work professionally. Being gay never adversely affected my career.”

Mattis is disappointed with the notion that figure skating being a gay sport has contributed to the decline of the popularity of the sport.

When asked how he has celebrated Gay Pride month, Mattis jokingly responded with ‘leather pants’, but quickly corrected himself.

“My time on the dance floor is done. My partner, Terrence and I are inching closer to a decision to become parents,” he shared. “We are members of the Human Rights Campaign, and I have been keeping an eye on the New York decision. We have hosted some gay pride celebrations, but I prefer to keep my pride on the grassroots level at this point and work on the interpersonal level.”

American ice dancer Nick Traxler came out to friends and family when he was 17 years old, long before he made his debut on the senior level at the U.S. Championships.

“I always felt confident that my skating friends and coaches would support me, and they did,” Traxler said. “Not only were they accepting of my coming out, but they were overwhelmingly supportive and affirming.”

Known for his personal motto ‘Let your sexy shine’, Traxler is currently looking for a new partner with whom to compete. He credits his career as a figure skater for helping him to grow into the confident gay man that he is today.

“I was never made to feel like an outcast,” he said. “Instead I was always encouraged to be myself. It has been 13 years since I came out, and it is because of my involvement in figure skating that I have had the confidence and support system to live my life to the fullest.”

A resident of Dallas, Traxler will celebrate pride with his city a little later in the year.

“Dallas is weird, and we don’t have our Pride celebration until September,” he laughed. “I plan on celebrating with friends by going to the parade and by letting my sexy shine as usual.”

The Ice Theater of New York

The Ice Theater of New York (ITNY) announced earlier this month that they would have a float in the 2011 Heritage of Pride March in New York City on Sunday.

“We are participating in the parade in support of the members of our company and especially members who have been lost to AIDS over the years,” founder Moira North explained. “Members such as Patrick Dean, who was my dance partner, Brian Grant, Bill Woehrle, and John Curry who performed with and gave classes for ITNY over several years.”

The float will feature ITNY’s plastic ice surface, and will be skated on by some of the company’s members.

“The float, like most of what we do, was designed internally,” North said. “Some very talented and beautiful skaters from the company who are accomplished on this surface (will perform). We are choreographing the movement in a somewhat improvisational way depending on the music. The parade is over three hours long.”

The float will also serve to promote ITNY’s Fall Gala on October 24th at the Sky Rink at Chelsea Piers.

No article about gays in figure skating would be complete without the Grande Dame of figure skating Rudy Galindo. Galindo didn’t just come out of the closet—he brought out the high heels, the boa, and the sassy attitude. Or at least he did in many of his exhibition programs. But in order for any of that, Galindo had to become relevant, and he did that in a big way by winning the national title in his hometown of San Jose, Calif., 15 years ago.

“When I wasn’t placing well and was getting standing ovations, I was told it was because I was flamboyant and openly gay,” Galindo recalled. “I was in the best shape of my life in 1996, I skated well, and I was rewarded with the appropriate marks.”

After winning the U.S. title, Galindo skated in the exhibition of champions to an A Capella version of Ave Maria in a black costume with a huge red AIDS ribbon adorning the collar.

“I was given the music by Bill Hare from the Stanford Choir, and I thought it was so beautiful it broke my heart,” he said. “I decided to use the music and create a program dedicated to my brother who died from AIDS two years before. The red ribbon had to be big because I wanted to make a statement about what the program was about.”

With such an iconic journey that week in his hometown, Galindo was catapulted in to the mainstream. Immediately he was a gay icon.

“The transition into the spotlight wasn’t that difficult or stressful,” Galindo said. “I was embraced by the straight, Latino, and gay communities, and they gave me so much support. I was welcomed everywhere I went.”

Since then, Galindo has been invited to be the Grand Marshall in Gay Pride parades, had a guest star turn on NBC’s Will and Grace, and has worked tirelessly for HIV/AIDS organizations.

“I have learned that no matter who you are, you can’t hide,” Galindo explained. “If it’s gay, HIV positive, or whatever. Just go forward and make it big. Get out there and help people.”

Galindo forever changed figure skating for gay skaters, paving the way for the likes of Johnny Weir and others who will come along later.

“In my heart, I think that I opened some doors for people,” Galindo said. “I think that figure skating now values the more flamboyant skaters under the new system. It is better suited to those who have artistic strengths.”

Galindo has to put off celebrating Gay Pride month this year since he is working as a full time coach whose students are competing during the San Francisco Pride festival. However, he just received an exciting invitation that might make up for missing the celebration.

“I was just asked to be part of the 2012 U.S. Championships in San Jose,” he said excitedly. “I don’t know if they want me to tell anybody what I will be doing yet, but I am very excited.”