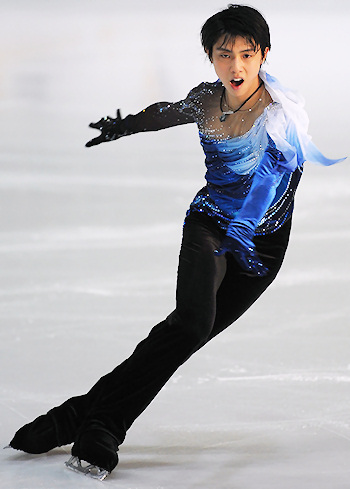 Japan's Yuzuru Hanyu lead the men at 2011 Nebelhorn Trophy after his performance to Scriabin's Etude in D minor, op. 8 no. 12.

Yuzuru Hanyu of Japan won the Men’s short program at Nebelhorn Trophy on Thursday, while USA’s Stephen Carriere came back with a good short to place a very close second. Russia’s Zhan Bush is in a surprise third.

Hanyu stepped out of his opening quad but recovered to nail a triple Axel, triple Lutz-double toe and two spins which garnered a level four. However, the combination spin was just a level two. The 16-year-old scored 75.26 points.

“I made a mistake on the quad, but I still got over 70 points,” Hanyu noted. “I was very nervous to skate my new program in competition for the first time and my legs were shaking.

Carriere has nice memories of Oberstdorf as that is where he won his Junior World title in 2007. He produced a clean short to La vie en rose that included a triple Axel, triple loop, triple Lutz-double toe and two level-four spins. The American picked up 74.51 points.

“I think it was pretty good,” said Carriere. “I’m kicking myself about the combination jump. I wasn’t as focused on the Lutz-toe as I was on the Axel and the loop. I’m just happy that my point totals are increasing as the season progresses, because that’s my goal.”

Carriere missed the 2010 and 2011 U.S. Figure Skating Championships due to recurring tendonitis and surgery on his right ankle.

“I contracted an infection and it was incapsulated,” he explained. “I had surgery within four days. I was grateful for that, but I was kicking myself because I wanted to be back for Skate America.”

“From there, I was pushing it too hard,” he continued. “I did way too many jumps and started getting another injury on the left ankle. It was very hard.”

Carriere returned to his home town of Boston in December and switched coaches from Priscilla Hill to Suna Murray. He started full training in the spring.

Bush was the only skater to hit a clean quad (in a combination with a triple toe). In total, seven skaters attempted a quadruple jump in the short. Performing to a rock version of Beethoven’s Symphony No. 5, the Russian went on to complete a triple Axel, a triple flip, and a level four combination spin. he picked up 72.01 points, and showed much improvement since the Russian test skate two weeks ago.

“I was very focused on each element,” said Bush. “It is a completely different atmosphere from the test skate. In competition, you have to pull yourself together. My goal is just to skate a clean short and free program, and the judges decide the placement. I am only satisfied when I do my job and my coach is pleased.”

Coach Alexei Urmanov was pleased – especially with the fact that his student landed his first quad toe in competition.

Michal Brezina from the Czech Republic opened his Kodo Drums routine with a solid triple Axel, but crashed on the underrotated quad toe. He is currently ranked fourth at 69.77 points.

“Except for the quad, everything else was good,” commented Brezina.

Kazakhstan’s Denis Ten stepped out of the triple Axel but produced a triple flip-triple toe and triple Lutz to come in fifth. Javier Fernandez of Spain touched down with his hand on the quad toe and finished sixth.

Tatsuki Machida of Japan, the defending Nebelhorn Trophy Champion, withdrew after the morning practice citing injury. He sprained his right leg in practice on Wednesday.