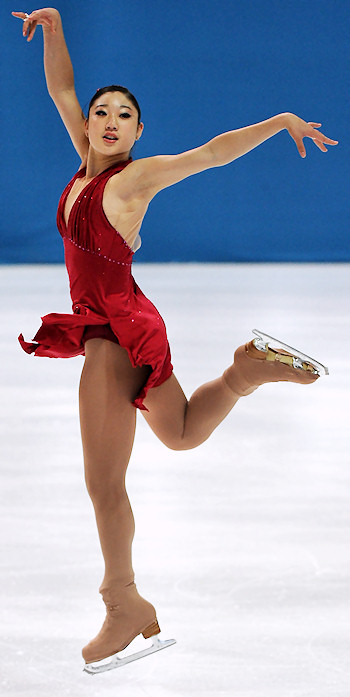 USA's Mirai Nagasu performs to Danzarin by Julian Plaza at the 2011 Nebelhorn Trophy.

USA’s Mirai Nagasu leads the Ladies after the short program at Nebelhorn Trophy in Oberstdorf on Friday. Elene Gedevanishvili of Georgia finished second and Germany’s Sarah Hecken is currently sitting in third.

Nagasu’s tango to Julian Plaza’s Danzarin featured a triple loop out of footwork, a double Axel and two level-four spins, but she underrotated the triple Lutz in combination with a double toe. The 2010 U.S. Champion picked up 58.38 points.

“For one of the first competitions of the season it went really well,” said Nagasu. “There is a lot of work to be done in every small aspect, including my costume, my skating and my jumps.”

“I put it on a CD for Frank (Carroll) to listen to it and he really liked it,” Nagasu explained of her music choice. “We all decided that I am ready for the tango. It’s my first time skating to a tango. It is a lot of fun and it embraces my personality. I just hope to look like a mature skater now.”

Gedevanishvili had picked a tango as well and completed a triple Lutz-double toe and a triple Salchow, however, she hang on to the double Axel. The layback, usually one of her strong points, was only a level one. She collected 50.56 points.

“My program was not perfect,” the 2010 European bronze medalist said. “There are still a lot of things to improve, but basically I am pleased with how I did today. My goal for the season is to become more consistent.”

Gedevanishvili has switched coaches and moved to Canada to train under Brian Orser.

“Robin (Wagner) didn’t want to coach anymore and I went to Toronto to try it out there and I liked it,” the Georgian noted.

Hecken downgraded her planned triple toe-triple toe to a triple-double and stumbled on the landing of the triple flip – a new jump for her. However, the German Champion landed a nice double Axel and received two level fours and one level three for her spins. The 18-year-old proved in her Malaguena routine that she has progressed artistically. She earned 49.07 points.

“I am very happy with my program and I am glad that I did the triple flip for the first time in my program,” Hecken commented.

Shion Kokubin of Japan had exactly the same score, however, Hecken’s technical mark was higher and broke the tie. Kokubin produced a triple Lutz-double toe, however the Lutz had an edge call and the triple flip was underrotated. Nevertheless, the double Axel and the spins were strong, and she presented her program to Memoirs of a Geisha well.

Sweden’s Joshi Helgesson hit a triple Lutz but did a three turn out of the triple toe before adding a double toe for a combination. Helgesson ranks fifth with 47.91 points. 2010 Russian Champion Ksenia Makarova was one of the top favorites, but she missed her combination, falling on a downgraded triple toe and then singling a loop. The spins were all a level four and the program to music by Yann Tiersen was beautiful, so despite the mistakes, her component score went up. She currently sits in sixth place.