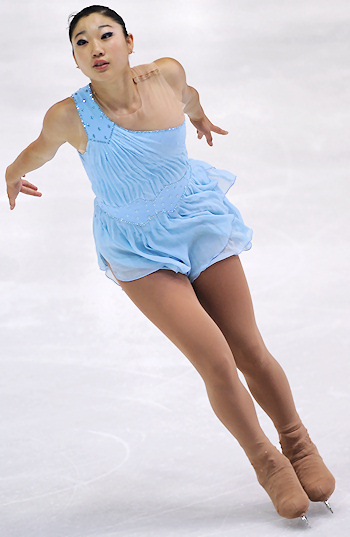 USA's Mirai Nagasu performs her long program to Spartacus at the 2011 Nebelhorn Trophy.

USA’s Mirai Nagasu skated to the gold medal at the Nebelhorn Trophy in Oberstdorf on Saturday. Elene Gedevanishvili of Georgia earned the silver medal and the bronze went to Sweden’s Joshi Helgesson. It showed that Nebelhorn is an early season event as the skaters made many mistakes.

Skating to Spartacus, Nagasu fell on her first opening triple loop-double loop jump combination, but recovered to nail a double Axel-double toe, a triple Lutz combo, a triple loop, and another double Axel. However, the solo Lutz and the flip were underrotated. Her three spins merited a level four, and she was awarded 109.08 points (totaling 167.46).

“Coming into this competition my goal was to do as well as I could to gain my confidence back,” said Nagasu. “I lost a lot of confidence last season – especially since I was injured and couldn’t train the way I wanted to. Missing the World team was a big disappointment for me.

“This season I don’t want to have any regrets,” she added. “Hopefully I’ll make the world team. I think today’s performance was a step into the right direction.”

When asked what she felt was the best part of her program, Nagasu had a surprising answer: “It was the fall on the double loop in the beginning. I was really nervous, so much that I was shaking, but when I fell it shook me a little bit and I thought that I need to be more sharp. That was when I got my feet back under me and I just knew what I had to do.”

Gedevanishvili produced two excellent triple Lutzes at the beginning of her Phantom of the Opera routine, but she lost energy in the second half, falling on a triple Salchow and popping a toe. The 2010 European bronze medalist scored 96.36 points and totaled 146.92 points.

“This is the first time for me here,” noted Gedevanishvili. “It’s pretty early in the season still, and I just wanted to get out my programs and to improve my skating. I didn’t change my long program, because I like it and it is really strong. I have to feel the music to be able to transmit it to the audience.”

Helgesson’s program to Romeo and Juliet included a triple loop, Lutz, and double Axel-double Axel sequence, but she underrotated four other jumps. The Swede picked up 90.82 points and moved up from fifth to third at 138.73 points overall.

“I’m pretty happy with both my programs. I saw now on the paper (judges details) that I had some mistakes,” Helgesson said, referring to the underrotations.

When asked about her program, the 18-year-old responded: “It is a more modern Romeo and Juliet, and I think it has a strong message and I really want to transfer that to the audience and the judges.”

Shion Kokobun of Japan landed three triples, but singled both Axels and underrotated her triple flip. She remained in fourth place with 134.66 points.

Viktoria Helgesson, Joshi’s elder sister, moved up from ninth to fifth. She struggled with some underrotations as well and scored 133.52 points.

German Champion Sarah Hecken had a bad day. She slipped from third to sixth at 128.04 points after crashing on the triple loop and underrotating the triple toe-triple toe and a double Axel.

Russia’s Ksenia Makarova withdrew before the free skating as she aggravated an existing injury on her left hip in her short program on Friday. Makarova was ranked sixth in the short.