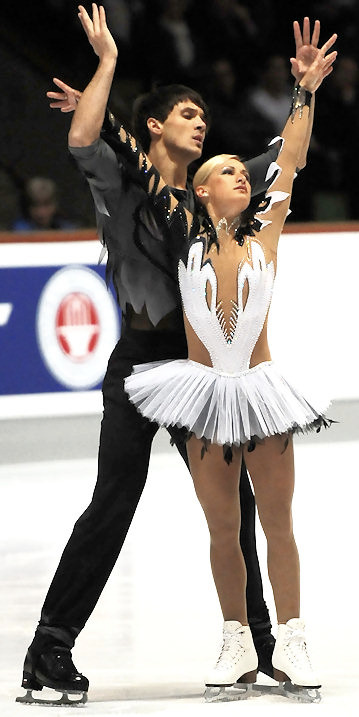 Tatiana Volosozhar and Maxim Trankov of Russia redeemed themselves and took gold at Nebelhorn Trophy with a strong free skate to the Black Swan. Teammates Vera Bazarova and Yuri Larionov moved up from fourth to earn the silver, while USA’s Caydee Denney and John Coughlin slipped from second to earn the bronze in their first international competition as a team.

Volosozhar and Trankov were determined to redeem themselves after the subpar short program. They opened their powerful, dark Black Swan routine with a huge triple twist followed by side by side triple Salchows and a triple toe-double toe combination. The Russians also hit a throw triple loop and Salchow and earned level fours for the spins, the death spiral and two lifts.

The only error came at the end when they aborted the last lift. The World silver medalists scored 125.74 points and accumulated 183.65 points. The program was well received by the crowd.

“Today was much better than yesterday,” said Trankov. “I have to say, we messed up the short program. Today we skated well. It is only upsetting that we missed the last lift. We need to pay more attention to the lifts, but we didn’t have so much time practicing lifts as I had injured my left shoulder during the summer.”

Bazarova and Larionov again struggled with some elements in their Doctor Zhivago free program. Bazarova fell on the triple toe and on the exit of the throw triple loop (although she already had landed it). The highlights were the triple twist and throw triple flip. The couple scored 165.23 points.

“This competition didn’t work out so well for us,” Bazarova admitted. “We made quite a few mistakes in both the short and free program and we have a lot of work to do. But we have some time before the Grand Prix, and hopefully we’ll take something from this experience.”

Denney and Coughlin’s routine featured a triple toe, a triple twist and a double Axel-double Axel sequence as well as difficult lifts, however, Denney fell hard on the throw triple loop. The Americans dropped to third at 162.73 points.

“We are happy with our first international showing together,” said Denney. “We were very happy with our short, but our long program wasn’t one of our best.”

The gold and bronze medalists agreed that they don’t like the rule changes for the lifts as the lifts look less beautiful.

Maylin Hausch and Daniel Wende of Germany put out an entertaining program to the Your Highness soundtrack to finish fourth. They produced a triple twist with a little messy catch, but the throw triple Salchow, triple toe-single Axel sequence, and the lifts and spins were good. The Germans were ranked third in the free skating.

“This result here gives us hope for the future,” said Wende. “We were far behind the Russians before and now we got closer. We still can up the difficulty of our program. We want to include a triple Salchow and the throw triple flip wasn’t clean today.”