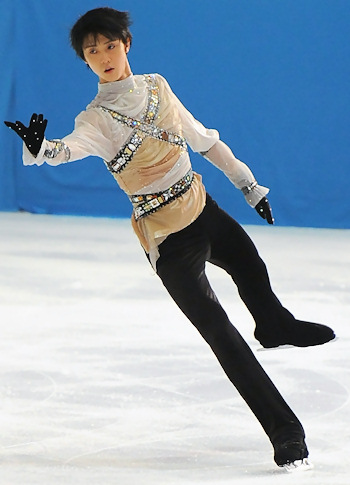 Japan's Yuzuru Hanyu performs his long program to music by Craig Armstrong for the long program at 2011 Nebelhorn Trophy.

Japan’s Yuzuru Hanyu skated off with the gold at Nebelhorn Trophy in Oberstdorf on Friday. Michal Brezina of the Czech Republic moved up from fourth to take the silver,  and USA’s  Stephen Carriere held on to the bronze medal.

Performing to music from the Romeo and Juliet soundtrack, Hanyu stumbled out of his opening quad toe but hit two beautiful triple Axels (one in combination with a triple toe) and four more triples. He only popped a Lutz jump. The 16-year-old had excellent flow over the ice, and earned 151.00 points for the free skating and a total score of 226.26 points.

“I am pleased with the result and that I won, but I missed a few things and I’m looking forward to improving on this performance,” said Hanyu.

He is now heading home to Japan for a national competition.

Brezina opened his program to The Untouchables with a huge triple Axel followed by a quad toe, but he did a three turn on the landing. The Czech, ranked fourth at Worlds, doubled his planned quad Salchow but nailed four more triples. He also struggled with his combination spin, putting his foot down.

Despite the mistakes, the program was dynamic and well received. Brezina trains most of the time in Oberstdorf and the crowd supported him loudly. He picked up 145.23 points which totaled 215.00 points.

“I am quite happy with the program, except for the spin,” he acknowledged. “I skated much better here than I did last year.”

“The beginning of the season wasn’t very good,” Brezina elaborated. “Hopefully this start of the season is something that will continue and I will get better with each competition. My next competition is Skate America and I have a little more time to prepare.”

“I know what I have to work on and I know what my coach will make me to work on, and I’m looking forward to that,” he continued with a laugh. “I kind of like doing run throughs of my programs in the season and I think my coach is going to make me do a lot of run throughs before Skate America.”

Carriere stepped out of his first triple Axel and singled the second one. He landed five triples (sans a triple-triple combination), and overall he looked hesitant in his routine to Swan Lake. He was ranked fifth in the free with 133.03 points, but remained in third place overall at 207.54 points.

“I’m not so happy with my long program today,” admitted Carriere. “The Axels were a major issue and everything else was slow and cautious.”

“I’m happy with what I did in September,” he continued, “and I’m happy that I can go home and work again. At this competition, something that stuck out for me was the cautious skating in the short with the Lutz-toe and in the entire long [program]. When I get home I’ll really get to work on pushing myself harder and trusting myself more. I think at this competition I was kind of holding back.”

Javier Fernandez tripled the intended quad toe, doubled the Salchow, and almost fell on the back end of his triple flip-double toe-double loop combination, however, both triple Axels were strong. The Spaniard scored 137.59 points to move up from sixth to fourth overall.

“I think it was pretty good for my first competition,” said Fernandez. “I am not worried about missing the quads. They’ll come later in the season.”

USA’s Max Aaron touched down on his underrotated quad Salchow, but went on to complete six clean triples – including two Axels. He includes a triple Lutz-single loop-triple Salchow combination and a triple flip-triple loop sequence in his program. He moved up from eighth to fifth and was ranked third in the free. Overall he had 204.17 points.

Zhan Bush of Russia slipped from third to sixth at 200.58 points. He missed his quad toe and a triple loop.

“I never miss the triple loop,” he sighed.

Russian Champion Konstantin Menshov was the only skater to land a clean quad – a quad toe-double toe combo, but he made errors on other jumps and finished in seventh place overall.