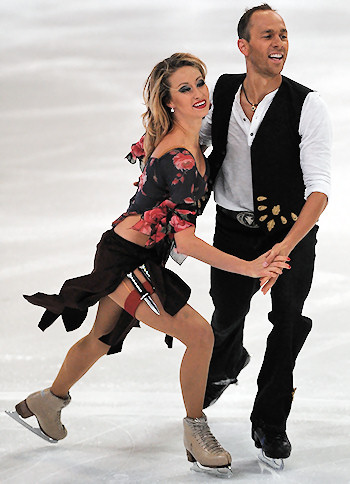 Germany's Nelli Zhiganshina and Alexander Gazsi perform to Desperados from Once Upon a Time in Mexico for their Short Dance at the 2011 Nebelhorn Trophy.

Home crowd favorites Nelli Zhiganshina and Alexander Gazsi of Germany grabbed a narrow lead in the short dance as the Nebelhorn Trophy kicked off in Oberstdorf on Thursday. USA’s Madison Hubbell and Zachary Donohue  are a close second, while Kharis Ralph and Asher Hill of Canada came in third.

Zhiganshina and Gazsi produced a sultry Rhumba to Desperados from  Once Upon a Time in Mexico and a lively Mambo. Zhiganshina sported a set of knives strapped to her right leg.

“I am a dangerous and dirty woman,” she explained of  her character in the program.

The German Champions produced a solid Rhumba compulsory dance and earned a level three and four for the two sequences. Gazsi wobbled on the twizzle and they were graded a level three, while the rotational lift was a level four and the side by side circular footwork a level three. The duo scored 55.03 points.

“We are very pleased that the program was well received,” said Gazsi. “Now the pressure is up and it is close to the second place. But the placement here is not the most important thing. It is more important to us to present our programs well and to get feedback. If a good placement comes out of it, it is a bonus.”

Hubbell and Donohue had a strong debut in international competition as a team. Skating to Mambo, Rhumba and Samba, they picked up a level three and two for the Rhumba and a level four for the curve lift and the twizzles (although Donohue had to save them). They had a mature look to them.

“I’m not sure myself (how I saved it),” admitted Donohue of the twizzle. “I wasn’t controlling my body.”

Nevertheless, the couple was happy with their outing overall. The Americans earned 54.82 points.

Ralph and Hill maintained good speed throughout their dance to Samba, Rhumba and Mambo. The Canadians wore blue costumes and hers was dotted with dozens of sparkling sequins.

“I don’t know how many there are,” laughed Ralph of the sequins. “Each time I take it to the costume maker, she puts on some more.”

The Rhumba sequences were graded a level two and the twizzles and straight line lift a level three to collect 52.03 points. The Latin theme was something new to Ralph and Hill.

“We’ve never done Latin before,” Ralph said. “We really needed to get our cardio up. There is so much energy in it. We had to work hard with our ballroom coaches.”

Isabella Tobias and Deividas Stagniunas of Lithuania finished fourth at 49.06 points. Tobias stumbled on the twizzles which only earned a level one. The brother and sister team of Cathy and Chris Reed of Japan also struggled with the twizzles to place fifth with 47.90 points. USA’s Anastasia Olson and Jordan Cowan were solid on the twizzles and the Rhumba sequences, but their lift was shaky. They also had a costume failure deduction of one point.

Sara Hurtado and Adria Diaz of Spain were the only dance team to earn a level four in both Rhumba parts, however, Hurtado fell in the circular steps. They are currently sitting in seventh place.