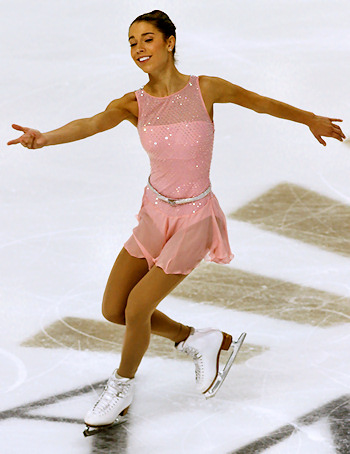 The ladies were the last to take to competition at Skate America in Ontario, Calif. on Saturday, and it was worth the wait. Reigning U.S. Champion Alissa Czisny leads the field, with 2011 European silver medalist Carolina Kostner nipping at her blades. Another American, 18-year-old Caroline Zhang sits in third place.

“I guess that was pretty good out there tonight,” Czisny said with a knowing grin. “I was really nervous going out there tonight this being the first competition of the season. I was happy to get my feet under me.”

Czisny skated a vintage ‘Alissa’ program to an instrumental version of La Vie en Rose replete with her usual grace and trademark spins. Last year’s Grand Prix Final champion’s lone mistake was an incorrect take off edge on her triple flip jump. Though she wasn’t sure if she would compete this season, the 24-year-old is glad that she made the decision to come back.

“I love skating, and last season I started learning that I love to compete,” she said. “I didn’t quite reach my goals last season, so I decided that as long as I still enjoy it, that I would continue. I’m just not thinking that far ahead.”

Czisny earned a career high 64.20 points in the short program, and takes a nearly four-point lead into the free skate.

“I plan to do seven triples in the free skate, including a triple-triple,” she said.

After taking an extended break from skating after the World Championships, Kostner began training for the season in July. Getting a late start was what the injury-laden 24-year-old is starting to feel like her old self.

“Last year, I struggled with pain in my knee. I never really got into perfect shape,” said the six-time Italian Champion. “This year I started slowly because the season is long. I’m going to go with the flow and improve step by step with every competition.”

Kostner opened with a strong triple toe loop-triple toe loop combination in her Allegretto from Trio No. 2 program, and showed a new edgy presentation style that suits her well.

“I wanted to experience something new and try it out,” Kostner explained. “I didn’t know if it would be good or not. I felt that it would be fun to choreograph a piece of music like this, and it was really fun.”

The World bronze medalist earned 60.23 points in the short program, and leads Zhang by more than five points.

Zhang is making a comeback of sorts after two consecutive disappointing seasons. The recent high school graduate hasn’t been near a podium since the 2010 Four Continents Championships, but she is starting to look like she could make a big statement here in Ontario.

“It’s been hard,” the 18-year-old admitted. “There have been a lot of choices to make, and I realized that I loved skating enough to try to stick with it and do the best I can. It’s just something I love to do and want to do well in.”

Zhang opened with a strong triple flip-double toe loop combination, and also landed a clean triple loop. Beaming from start to finish in her Rushing Wings of Dawn program, Zhang’s only mistake was an unsteady landing on her solo double Axel.

“That’s not really a challenging element, it was just a silly mistake,” she said of the Axel. “I think I just checked out a little bit late, so hopefully I fix it by tomorrow.”

“It’s been a lot shakier than it has in practice, but for one of the first international events of the season, I’m happy.”

Another 18 year-old, Japan’s Haruka Imai, finished in fourth place with 54.67 points, while Sweden’s Viktoria Helgesson was fifth with 51.13 points.

American Joelle Forte, who is making her Grand Prix debut at the ripe old age of 25, is in sixth place.

“I felt really good,” said Forte of her performance. “I wasn’t nervous, I was really calm. The Lutz was so much higher [than I thought it would be] that I didn’t know when the ice was going to get there, but I was able to complete the combination on the Salchow, so I was happy that I was able to do everything else to the best of my ability.”

Italy’s Valentina Marchei and Georgia’s Elene Gedevanishvili are in ninth and 10th, respectively.