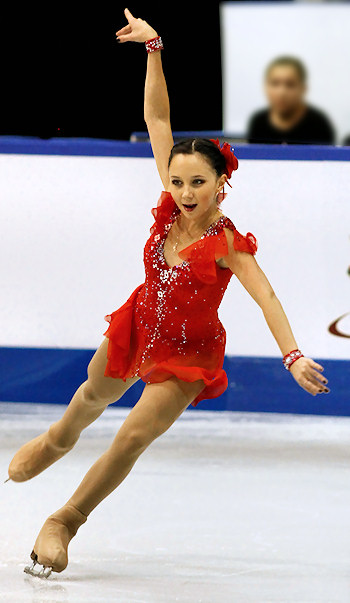 Tuktamysheva easily skated through her Latin-themed program, nailing six triple jumps including a triple Lutz-triple toe. The only glitch came when she did a double Axel-double toe instead of the planned double Axel-triple toe combination. The 14-year-old from Glazov in southeastern Russia earned 117.81 points and totaled 177.38 points.

“I am very happy about winning this event,” the World Junior silver medallist shared. “I skated well and I have a lot of positive emotions right now. I didn’t feel a big difference between this event and the junior events. I try not to think about the importance of an event. I take each event seriously, no matter if it is a big or a small one.”

The Russian Junior Champion admitted that there was pressure. “There is always pressure. There was and there will be pressure, but I try not to pay attention to it. I just want to do my job.”

Suzuki put out a lively program to Die Fledermaus by Johann Strauss and produced seven triples as well as three level-four spins. However, the 26-year-old stepped out of a triple loop, added only a single loop to a shaky triple Lutz, and downgraded a combination to a single Axel-triple toe. Still, the Japanese was ranked first in the free skating thanks to a higher component score with 119.44 points. Overall she received 172.28 points.

“I enjoyed my free skating so much,” Suzuki said. “After the Olympic Games, I felt defensive, but this year I’m trying to be more positive again and to improve.”

Wagner landed five triple jumps, but missed an underrotated Lutz to earn 110.98 points for her program to the Black Swan. The 20-year-old dropped one spot to third at 165.48 points.

“Today felt great,” Wagner told the post-event press conference. “I was so happy with what I put out. For the first long program of the Grand Prix season I just wanted to perform very strong. I was very satisfied with the exception of the Lutz. Now I have a week at home. (Coach) Mr.Nicks and I are plan to make a few changes and adjustments, and then I go to NHK (Trophy). I am very excited.”

Russia’s Alena Leonova made up for her disappointing short program with a decent free to  Adagio for Strings by Samuel Barber and Requiem for a Tower by Clint Mansell. She nailed a triple toe-triple toe, but a loop and a flip were underrotated and she also singled the Axel like she had in the short program. She pulled up from seventh to fourth with 152.22 points.

“This morning I woke up and was a different person from yesterday,” said the Russian silver medalist. “I thought it is not worth to get nervous anymore and I didn’t have to lose anything. Overall, I think I did quite well for my first competition, but I feel my short program is not quite ready yet. I skated my free at the Japan Open, and that helped me.”

USA’s Mirai Nagasu remained in fifth place with 151.72 points. The Californian included four clean triples into her Spartacus program, but had trouble with her layback spin and two-footed an underrotated triple Lutz.

Teammate Rachael Flatt had a nightmare of a free skate. She only landed one clean triple – a loop, and doubled or cheated the other planned triples. Flatt obviously lacked stamina and was very slow. She plummeted from third in the short to tenth and last with 128.22 points.