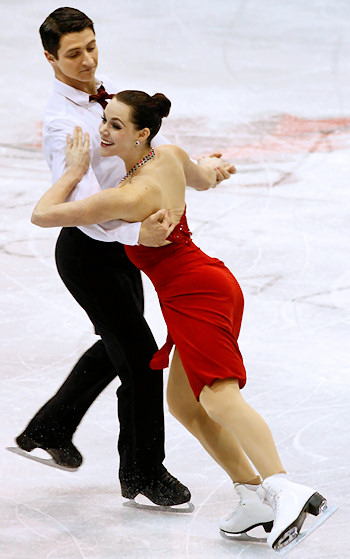 Tessa Virtue and Scott Moir of Canada perform to "Funny Face" for their Free Dance.

Tessa Virtue and Scott Moir of Canada danced effortlessly to their third Skate Canada title as the event wrapped up Sunday in Mississauga, Ontario. Teammates Kaitlyn Weaver and Andrew Poje clinched the silver medal, while the bronze went to Italians Anna Cappellini and Luca Lanotte.

Virtue and Moir looked sharp the moment they stepped on to the ice, and the Olympic Champions immediately got into the characters of Audrey Hepburn and Fred Astaire from the movie Funny Face. Their lifts were strong and their footwork had good flow. They picked up a level four for five out of seven elements. Both step sequences were a level three. At the end, an excited Moir hugged his partner and beamed with joy. The team scored 106.73 points for the free dance and racked up 178.34 points overall.

“Everybody could tell at the end that I was pretty excited about the way we skated,” Moir noted at the press conference. “We felt we executed everything the way we wanted to. We felt we had a moment with each other, and that’s what skating is all about. It is a great building spot for this year.”

Virtue agreed. “Both of us have had moments of near impersonation. We were in the character and were doing some extra artistic things that we hadn’t necessarily done at home. When the training is there and the technical base is there it offers this opportunity in the performance and it felt good.”

Weaver and Poje had opted for a totally different kind of dance, choosing the dramatic and passionate song Je suis malade. Their lifts were spectacular, including a one-armed rotational lift where he picks her up from the ice and whirls her around. However, Poje let go of his blade in the twizzles which cost them a level, and their diagonal footwork garnered only a level two. The Canadians scored 92.68 points for the free dance and were ranked third in this portion, but the difference was just 0.27 points. Overall they remained in second at 155.99 points.

“It felt great to come out today and to skate the way we did,” said Weaver. “Our goal was to really feel the passion and music and tell the story that we’ve worked so hard on. That program wasn’t as good as we could do in practice, so I know we have room to grow for sure. But our goal was to set it free and to have no regrets. We want to be fully and emotionally involved with the performance so that the story comes across.”

“I had a little fluky warm up with the twizzles and that moment of doubt came in me,” Poje explained referring to his error. “I just let myself get involved with the thought process instead of letting my body doing what it knows to do. I’ll learn from that and I’ll know to keep captivated in my story and not think about what I’m doing.”

Cappellini and Lanotte had come up with yet another theme and told the story of La Strada. The Italians proved that they are back after a tough season. Their performance was technically strong as well, with five level-four elements. With 92.95 points, the team from Milan ranked second in the free dance and totaled 154.87 points.

“We enjoyed it, because we love this Free Dance so much,” Cappellini said. “This summer we really tried to work on our skating skills and we felt we were able to show it in competition and we are proud of it.”

“We tried to give everything, our emotion, and to bring out on the ice what kind of persons we are,” Lanotte added. “I think we’ve done it and we want to improve and to feel more confident and show everybody that we are back and can be the best.”

“I feel like I’m starting over, especially for me after taking the last season off,” said Bates. “I feel like this is a totally new chapter to my career. Skating with Madison is challenging in some new ways – with the new coaches as well.’

“I’ve had to reevaluate my skating and trying to change my technique,” he continued, elaborating on the new partnership. “New coaches for me, new partner for both of us – it is just going to take experience and time. Experience is something that you can’t replicate at home. You have to get out and compete to get experience together. So this is a really good opportunity for us and even if there is a rough skate like on Friday night, it is really something we grow from.”

In addition to a level one for the circular steps and two level twos for a lift and the diagonal footwork, Riazanova and Tkachenko received a two-point deduction for a music restriction violation. Apparently, the majority of judges felt that the Romance by Georgi Sviridov didn’t have enough rhythm. However, the program looked beautiful and seamless. The Russian silver medalists scored 132.36 points.

“It is upsetting,” admitted Riazanova.

“We’ll go home and will discuss everything with our coach and we’ll look at our elements so that we can improve them for the Cup of Russia,” said Tkachenko. “We skated well and we were happy about that. It would be worse to have had a bad skate and a bad placement. The rest will come.”

World Junior silver medallists Pushkash and Guerreiro looked somewhat slow in their program to Capriccio Rhapsody, and also got a few low levels to come in sixth with 126.63 points.

“It was our first senior Grand Prix and we showed almost everything we wanted,” Pushkash said.

“We’ll fix what we need to improve,” Guerreiro commented. “We know where we are headed as do our coaches and we’ll just have to work hard.”