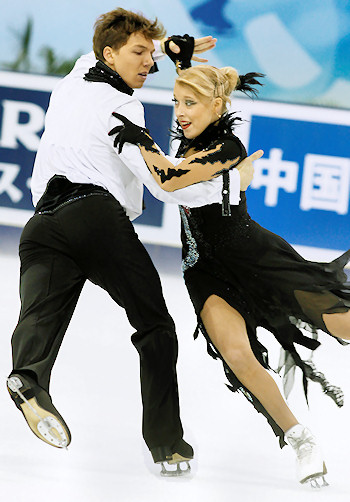 Russia’s Ekaterina Bobrova and Dmitri Soloviev clearly won the Cup of China in Shanghai on Sunday with an advantage of 15.12 points over World bronze medalists Maia and Alex Shibutani (USA). Pernelle Carron and Lloyd Jones of France captured their first Grand Prix medal, the bronze.

Bobrova and Soloviev gave a confident and smooth performance to Walpurgis Night on the way to their second Grand Prix gold medal. They had won the gold at the Cup of Russia in 2010. Six of eight elements merited a level four, but the circular footwork was a level two and the diagonal footwork a level three. The Russian Champions scored 97.79 points and had 163.52 points overall.

“Today we definitely skated better than yesterday,” Soloviev commented. “We feel this was our best performance of the season so far and we still improve on that emotionally, technically, with our edges, the lifts, and the speed of our spins.”

He also explained the story of their free dance: “Katia is a witch. She wants to take my soul and in the end she succeeds. She is seducing me with her glance, her looks, and her charm, and eventually she is successful, although I am resisting.”

Dancing to In the Mood and Moonlight Serenade by Glenn Miller, Shibutani and Shibutani produced difficult lifts and twizzles to earn 90.61 points. The World bronze medalists accumulated 148.40 points overall.

“We feel like this is a great stepping stone for us,” Maia Shibutani said. “We’re competing next week, so we’re looking forward to the process.”

“We had a great time this week,” added her brother. “Our free dance was a strong performance and we feel we’ve made some good improvements since the last competition, Finlandia Trophy. We are very happy with our first Grand Prix silver medal.”

“It is a fun program for us to skate to,” Alex Shibutani said of the Glenn Miller free dance. “It is a different direction from last year and we’ve upped our difficulty. We worked very hard over the summer. We want to step up our game and improve as skaters.”

Carron and Jones’ Jazz medley was highlighted by strong twizzles and a level-four spin. The couple from France received 78.56 points to move up from fourth with a total of 130.30 points.

“We are very happy with our performance and we had a great time out there on the ice,” Carron told the post-event press conference. “It is a great beginning for us after we changed coaches.”

“It is an awesome feeling and gives us a lot of positive emotions,” Carron added, referring to winning their first Grand Prix medal as a team.

“It feels good, especially after changing coaches and starting to work on the programs in August,” Jones commented. “Again, there is still a lot of work to do with the programs, but we are confident that they’ll get better with each competition.”

Great Britain’s Penny Coomes and Nicholas Buckland were on the way to the bronze medal with their Viva Elvis Medley but then Buckland fell on the transition lift in the last seconds of the program, taking her down with him. That, and another deduction for an extended lift, cost the couple the medal as they slipped behind the French by just 0.58 points (130.97 points).

“I think it was a very unfortunate thing because it was by the end and on the choreo lift as well,” said Coomes. “I think Nick caught a rut in bad ice and our timing was slightly off and I didn’t even notice we went down until I was with my bum on the ice.”

” We’ve come fourth in a Grand Prix, which is a fantastic result for us,” Coomes summed up. “Obviously it is disappointing to be so close to that podium place, but there is always next time.”

Xintong Huang and Xun Zhen of China turned in a solid Tango program to place fifth at 120.11 points. Teammates Xiaoyang Yu and Chen Wang fell behind them and were ranked sixth (115.59 points).

The two American teams switched places. Charlotte Lichtman and Dean Copely turned in a funny dance to the Austin Powers soundtrack and got mostly good levels to move up to seventh (109.61 points), while Emily Samuelson and Todd Gilles dropped to eighth after receiving three points deduction for an extended lift and an illegal element. Apparently the technical panel called a transitional move as an extra lift.